Before our first child was born, like so many men and women on the cusp of parenthood, I was painfully aware that my questions outnumbered my answers. Would she develop into a healthy, intact baby? Would I have the faintest idea what to do with her after she was born? Also: would my partner, who was carrying the child, have a safe birth? And while we're at it, how would those around us who were not already friends and family treat our lesbian family? And finally, most worrying: how would our public reception influence the child's feelings? Would she resent being raised by an unconventional parent in an unconventional family?

Over eight years into this journey, most of my early concerns have long since been put to rest. Our daughter was born healthy; the same with her younger brother. As have rookie parents before me, I rapidly figured out what to do with our infant, despite my incredulity that the hospital staff let us stroll right out of the building with her in her car seat, like so many pounds of farmers' market booty in a basket. Instinct, other parents, recommended books, and online forums calmed my nerves and carried me from one challenge to the next. And my partner's body and soul made it through both births stupendously. Given the range of birth experiences, we know we are fortunate.

And how would folks treat our family? By and large, so far, we've been treated as well as we could have hoped for. Though that's not by accident. Right before our daughter's first birthday, we moved to a very progressive city -- the first in the country to recognize same-sex domestic partnerships, and now also the first to adopt a curriculum district-wide that addresses family diversity, gender stereotyping, and bullying at the elementary school level. Living here ain't cheap. But the high cost is more than balanced by the rock-bottom emotional taxation we feel, knowing that our neighbors -- the majority of whom, after all, are straight -- keep taking action time and again to support us and our families.

The question that remained far and away the most critical to me has been how our children would experience and regard not just our family's difference, but my own. After all, I'm not only one of a pair of mothers; I am an unconventional mother as well. I'm what you might expect a tomboy to become when she grows up -- I'm addressed as "sir" several times a month, and once, when I was wheeling my kid's stroller into an airport restroom alongside our kids' mama, a woman snapped at me, saying "This is the women's room!" The simplest way to put it is that I am much more parent than mother; my children call me "Baba" rather than a variant on "Mama," and it feels right.

The most unexpected, biggest gift has been that my children understand and accept this facet of me better than everyone around them except my beloved. By showing me what hasn't mattered one jot, parentally speaking, they have shown me what does matter. Thanks to years of reinforcement from them, I have learned some things that are as surprising as they have been liberating.

(Caveat: my observations stem from eight pre-teen years, and I am aware that teenage angst may throw the whole curve off. I fully expect our kids to object to our breathing oxygen in their vicinity as much as or more than they'll object to our drawing any undue attention due to non-normativity. Time will tell. I hold out hope that two little Zach Wallses will be my reward for patience during the teen years. A gal can dream.)

Kids begin with no preconceived notions about how gender or parental roles are supposed to be.
Obviously, right? But I hadn't accounted for this in my early worrying. Their tabula rasa brains mean they meet you where you are. They also will accept your love whether you, their parent, are a feminine woman or a masculine one, a masculine man or a feminine one, or any variation on the gender spectrum. If you are a working mom or a caregiving, stay-at-home dad, they will sponge up that love however and whenever you give it to them, with no pre-judgment about what moms or dads or parents should be or do.

The impact of this is quite radical, and the reason why evolving family structures are so powerful: our families create the conditions of their own reinforcement internally, using the power of love on a blank canvas.

Kids notice, and are intrigued -- but not upset -- by adults blurring conventional gender boundaries.
Kids inherently feel the broad overlap between how girls and boys are (particularly in pre-pubescence), and someone slightly in between makes plenty of sense to them. I can't tell you how many times I was asked at the tot lot or the playground by some chipper preschool-aged moppet whether I was "a boy or a girl." When I answer in a way that does justice to the paradox at my own core, they are right there with me. I answer, "a little bit of both," and they usually continue to stare and measure this against the short-haired, men's clothes-wearing woman they see before them, and confirm what they figured.

If they remain perplexed, I gesture a quick-sketch gender spectrum, hands plotting in the air: "You can have boyish boys and girlish boys; boyish girls and girlish girls." I point to a spot more or less in the middle, and note, "I'm a boyish girl. But a grown-up." The young ones take in this information value-free, place it next to the 101 other brand new things they learned that day, and then move on.

Because younger kids so often think about adults in the context of their family roles, I sometimes say, "I'm the best parts of a mama and the best parts of a papa, rolled into one." After I said that to one of my son's afterschool program chums, she would call out "Dad-mom! Dad-mom!" and wave feverishly whenever she saw me, always with the zeal of a church bingo winner. I'll never forget what a friend's 4-year-old boy said -- at the time he vastly preferred skirts to shorts, and answered only to the name Jane -- "On the outside you're a girl." Then he tapped his chest, and looked dead at me. "But in your heart, you're a boy."

My children have felt not just tolerance, or comfort, but pride in our family -- not in spite of its difference, but because of it.
The first mistake I made, during my worry-ridden pre-parenthood years (and they were years: eight, from first "maybe baby" alt-conception info group to delivery room), was to assume that at best, my children would look at our family through my own battle-weary, middle-aged eyes. At worst, they'd see me through the jaundiced eyes of those that fear or hate my kind. Silly me.

The second mistake I made was to forget how fully and unconditionally I loved my own parents, warts and differences and all. My mother was overweight, and older by a decade than most other mothers. She moved slowly, looked different from all the other mothers, and was often mistaken for my grandmother. Did that make me judge her? Not in the least. Quite the contrary: it made me judge those who judged her. And then love her all the more, for her dignity.

And so it is with our kids. My daughter, year after year in school, has stunned me by drawing beautiful pictures and writing moving testimonials to the fact that she loves being someone who has two moms. She feels special because of this, not in spite of this. My son drew a colorful sign that reads "Rainbow Family," and carefully taped it on the thick glass of our front door so that it's the first thing you see upon entering our house.

In your role as parent, the only thing that really matters is whether it works for your kid.
Because your kid is the only party you're working for, as a parent. Your role as a partner matters to your partner; your role as a sibling or child matters to your siblings or parents; as a working person your role as colleague matters most to your colleagues and supervisors. But it is your kid you are parenting, not all the people around you who you may fear stand in judgment of you. Even if some do measure you and find you wanting -- and they do, and they will; people seem not to be able to help themselves -- such people are not the boss of you. In the best way possible, your kids are. Better yet, they are your guides. So pay attention. You'll probably learn more than you ever thought you would. 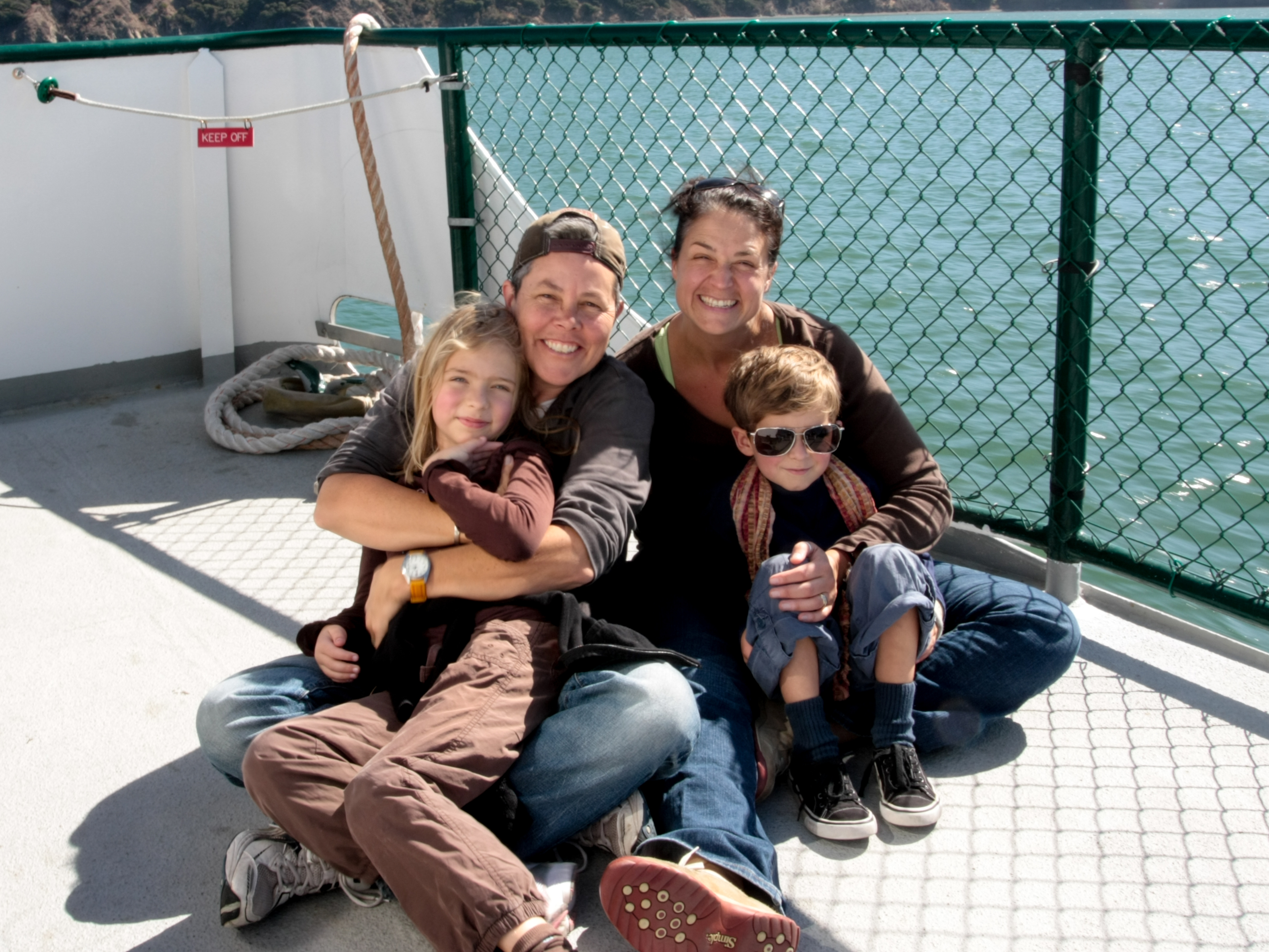