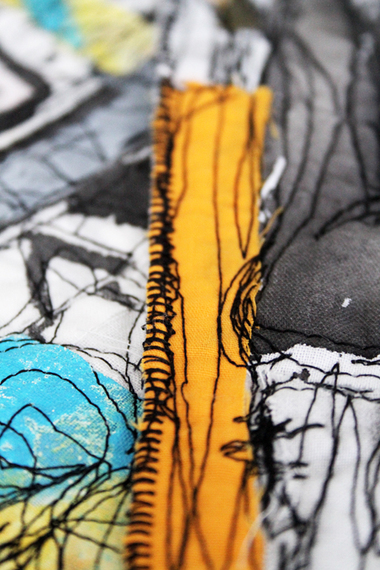 His shoes are almost always brown. Sometimes, like last week, his socks match his bright green jacket, which I think is worn on days with rain. But I can't be sure; my evidence is sketchy, inconsistent, and random. I sit across from him, on a nubby burnt orange sofa that feels sturdy and new-ish and is so dark it is almost red; it is long enough for a family of four, depending on the capacity of that family for closeness. Which, perhaps, is the point in his line of work.

In May of last year, I started seeing a psychiatrist; it is time for us to shed the stigma that rides alongside mental health interventions, like a puppy in a sidecar, but not as cute. Too many people suffer and die for not stepping into the sunshine to say, "Help me, I'm not waving but drowning," like my mother, and I won't be a party to that for myself after spending more than 40 years trying to bring sunshine to her or at the very least, trying to give her the information she needed to know that there was sunshine, somewhere. Note to self, step one: Stop caring about what others will say. It doesn't matter and they don't care anyway. And if they do care? Then they are caring about themselves and not you. Step two: Stop believing you can bring sunshine to anyone.

My visit on that day in May 2015 wasn't exactly by accident but by proximity instead, an appointment of convenience, you might say. We needed to find a new psychiatrist for Felix (formerly known as Tess) to get a form completed for a possible service dog placement (it didn't work out) and a friend had suggested a doctor in Asheville. As I talked to the office manager about making an appointment for Felix, I said, "You know what, I'd like to make an appointment for myself, too."

Why? Because I was convinced I was clinically depressed, because getting dressed had become almost impossible, because hiding was the story of most days, and because my family doctor had no solutions, seemingly, except to cut short the conversations when I said the word, "depressed," and double the prescription of Celexa, which wasn't helping, and still wouldn't help at twice the dose.

And so, in mid-May, I found myself in an office with a psychiatrist across the room from me in those brown shoes and green socks, a mantle slightly above and to the left of his head, covered in knick-knacks with great meaning, I'm sure, that sturdy burnt orange couch my perch, constant traffic outside the window as an aside.

Ninety minutes later, after a flood of talk that overflowed the banks of that particular river and into the next person's appointment, I emerged without Celexa, with a merry high-ho to my useless family doctor, and with a diagnosis not of depression but of PTSD.

I laughed when he said those four letters, adding after the laugh, "Well, that's ridiculous." I thought he was joking.

"PTSD? That's for soldiers and survivors of violence," I added, trying to cover up my laugh when I realized he was serious.

And then he cocked his head to one side and recounted the events of the last four years back to me:

The list went on from there, even. It went on.

I listened, and then deflected: "Yeah, but that's just life," I said. "Everybody deals with things like that all the time. That's what life is."

Slowly he reiterated his diagnosis, and outlined his proposed treatment plan.

I thought to myself:

When you are the person who endures, it comes as a shock when you simply cannot any longer, when showering and dressing and thinking have become too much. When cooking is out of the question. Or even eating.

When you are the person who holds it together for everyone else, it comes as a shock when you start unraveling, unable to help even yourself.

What would I tell a friend who recounted that list to me?

I would say, "Dear sweet little baby jesus, take a break. Rest, catch your breath, do some serious self care, get some help, you are home to a life."

What had I been telling myself?

"Buck up, this is life. Everybody is dealing with the same kinds of things, many a lot worse than this. You've got work to do. Don't ask for help, just put your head down and run at it. That has always worked."

I wrote four books in that four years. I honestly have no idea how I did that. I traveled, I spoke, I saw my husband and children through illness and transitions of many kinds, I survived two business partners who shattered my sense of who I am, I carried on.

We carry on with things significant and insignificant.

When I was a child, my father used to involve us in the chores, one of which was scrubbing the white wall tires on our car with bleach and a toothbrush every week. He would say to me and my brother, "If you want something done right, do it yourself." And evidently I believed him, taking everything on, even things no one had asked me to take on.

"Is it possible that by helping other people so much, you are actually insulting them?" my psychiatrist asked in that first conversation.

He looked at me.

"Okay, well, I never thought of it that way."

"Yes, I can see the truth in that. Yes, that is what I have been doing."

Afterward, as I investigated this new diagnosis (god bless Dr. Google), I saw that the incidence of PTSD among mothers whose children have autism is very high, higher than combat soldiers. And I understand that now, the days are full of old and new mines that will explode at a time I cannot know. I cannot know where to step to avoid the explosions. Add everything else on my list, and I now have no trouble at all believing that diagnosis.

I sit on that couch once a month. And truths are revealed to me, most often in my own processing, as words fall from my mouth onto a lovely Persian rug that clashes, but beautifully, with his chair. What I thought, I can no longer think. What I did to help people, I can no longer do. Because now I can see boundaries being crafted from what felt like alka-seltzer outlines before, dissolving or non-existent, and now being crafted like one stitches a beloved doll's head back on her old body after too much love and wear. Stitches to hold me together, to not let me ooze into the other.

I'm not that person without boundaries now. I will say no to you, even if my first impulse is to say yes. I won't enable you (or me) any longer. I won't solve your problems for you, even though I might think I can. (I always think I can. I know. I'm working on that.) I will stop being a people pleaser. I will extend compassion and love and listening and better questions, but no fixes. I will stop myself from making statements and will only offer questions instead. Why? Because you are the expert in your own life, not me. And if you don't like my questions, you have the right and responsibility to tell me to step back from even that.

Eight months into those conversations in that room, I also know now that I can set boundaries with great love, not anger. That's the next stage of my evolution. Stay tuned, and consider this:

When you believe you are helping, you might not be. Help yourself instead. Consider it likely you're the one who needs help, not others.

When you are giving, your gift might be an expression of power over someone instead of an expression of generosity. Open space to receive instead (hint: receiving is much harder because it is a place of such greater vulnerability).

When you believe you are helping, consider that you might be insulting that person instead. Let them manage their own life. Have faith that they can, in fact, do so. You manage yours. That's enough to keep your hands full.

As in all things, these things are true not always, but sometimes and often.

I sit, and I talk, I recognize, and I stitch myself back together again.