Authored for Psyched in San Francisco by Molly Howard. Molly is a Bay Area therapist (LMFT #80834), writer, and mindfulness devotee.

In the current election season we've seen plot twists at every turn. The primary possesses the stuff of a telenovela. Oddball caricatures pitted against each other: one, a wild white-haired savior to the people, cult thrashing in his wake.

Another, a cartoonish braggard. Face all lips, wilted cockatoo perched atop his head, pontificating about the literal and metaphorical size of his penis.

The first female candidate to see serious contention--again. Widely panned by both democrats and 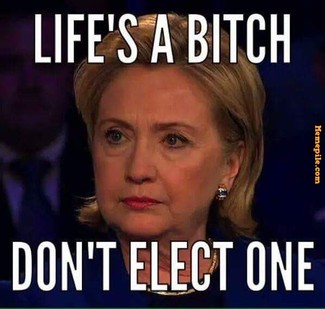 conservatives, but possessing the requisite brass balls. Portrayed as stuffy and cynical, willing to compromise on anything as she claws her way to the top.

Hillary Clinton came into the nomination battle swinging, and by many measures she's a formidable candidate. Yet she's largely hated. On the surface, many of the reasons for this pass muster. She's rich and her money doesn't smell squeaky clean. She's from a relatively newly established political family not universally loved, around which many pieces of negative news circulate. She's "lied"--or been dishonest--or pleaded the fifth over some particularly dogged inquiries.

And of course, she's a woman.

Just as the conversational arc around racism explores its regional implications--how in the conservative South, color differences aren't pretended away; while in the North, a kind of caricature of the reticent, jumpy white liberal dominates ("I didn't notice you were black!")--feelings around gender can also operate covertly among liberals as compared to their conservative counterparts. You're probably familiar with one of the white racial stereotypes--say, of Berkeley folk eager to deny their perception of color. There isn't a clear stereotype, though, for the sexist liberal. While we call out gender inequity in its most patent forms--in the wage gap or access to healthcare--sexism floats under the radar in the name of humor, family values, and the tired gender roles we're habituated to out of the mere fact of their ubiquity. It's is a cultural taboo we ongoingly afford ourselves, and it's relatively easy to get away with misogynistic statements unchecked.

Slate (in the linked text, above) does well covering the foundation of the joke's misogyny. I won't go into the racial semiotics of the joke as it stands, but imagine for a moment the joke's overtly racist equivalent--for example, with Maher's crosshairs focused on African Americans. The racist equivalent must also rely on violent imagery. Would it feature lynching, or a noose? Certainly, violent imagery towards blacks persists within the most bigoted corners of society, and the Obama presidency saw a detonation of racist tropes thought to be extinguished from dominant culture. While there are no shortages of racist "jokes," the mainstream--at least the liberal mainstream--has roundly agreed such commentary is wrong, even if that moral ground does not, apparently, apply to judicial rulings over the loss of black lives. Maher's outdated take on women, however, is a part of the no-no schtick promoted by liberals themselves which earns him fans. (I happen to be a fan of Maher's, though not from jokes such as this. I don't believe we can expect perfection from comics, and we know by now not to expect political correctness from Maher.)

We laugh along with the audience at Maher's Real Time, but we do it through expressions of feigned horror in order to cover our asses. Laughing through gritted teeth, we affirm the charade. The jokes are cringe-worthy but funny. It's funny to degrade and deride women. It's also in line with our unconscious motives. The status of women is marked one step down from the men, and women willingly allow themselves to get kicked around so we can prove we're good sports. With the handy defense, "It's just a joke!" we're stopped from exploring the deeper implications of our lopsided cultural commentary. We want to play, too. We're feminists, but god forbid we're feminazis.

It's this insidious nature of misogyny that's damning to social progress. We want women to advance in such elevated arenas as highest office, theoretically. Yet when a woman threatens to rise, we get the confusing not her. We get clear double standards. In politics as in life, we have the luxury to identify a truth when convenient, or erase it with rhetorical sleight of hand and populous desire. We can't implicate the offender when a sexist motive is felt but not pinpointed, when the motive would be perennially denied even by the camp promoting feminism. Because women are everywhere, in every society and every town, the feminist cause is in one sense, obvious, but in another, it's obscured by the normalization of discrimination across culture and geography.

Misogynistic motives are coursing through our veins. But when we direct our periscope towards Hillary, it's 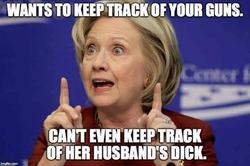 not in the view of one chauvinist attack where we'll find it. It resides in the midst of multiple imageries--it's in the collective ambiguity where we might catch its bitter essence. If we're paying attention, these layered messages sharpen our senses. It's there we'll find the sediment of our collective unconscious: the consensus of misogyny under which we unknowingly operate. It's well within the liberal rubric just as it stagnates in the conservative domain. It's obvious in the fabric of history and popular culture.

If you saw the Saturday Night Live skit in which Larry David applies his trademark Andy Rooney-like dissent to nearly everything--never more accurately than in his parody of Bernie Sanders' annoyance at his own supporters, then I should also note that was me.

"I'm great but I'm not five-posts-a-day great," David (as Sanders) nags about his supporters on SNL.

I was that idiot posting three, maybe four times a day. Memes, statistics, pleas. I gushed about Sanders and overshared how I "cried" when he dominated the Michigan primary in the biggest political upset in nearly thirty years. TMI is de rigeur among Bernie supporters. It describes an important part of the swell that swept us away. We're passionate about a political movement not seen stateside in many years. Finally, I thought, our country would be taken in a direction towards the plainly superior ideals of Western Europe. Socialized medicine and free education. Sensible clogs and rock-hard rye.

Elated with his progress but white-knuckling the polls, I made allusions to the apocalyptic parallel universe in which Sanders isn't nominated when I proclaimed him "our only hope." It could be that he is our only hope; some scholars have already noted so.

But something polluted started leaking into the edges of my vision, something I didn't want to see until it cast a pall over everything. Increasingly, berner rhetoric felt like veiled misogyny.

A photo appeared on the "Bernie Sanders is my HERO" page, one of the Sanders Facebook groups I followed. In the shot we see one white woman and three white men mugging at odd angles for the selfie. Elusively captioned: "We're going to make her non viable today!!! I can feel it!" our young subjects squeeze into view in front of a packed auditorium. One of the men could pass for Guy Fawkes if he went sandy blonde.

The message was off enough to send a jolt.

"We're going to make her nonviable." Her. That woman. That vaginad human persona who has the audacity to believe we would want her sitting in our Oval Office. We're going to take away her chances.

We can pinpoint contempt for women in sifting through the language of the zeitgeist. As in Maher's tweet, it's both hidden and obvious. Pronouns denote what we expect, and historically, we don't expect a woman to run for office at the same rate as men. Making "her" nonviable serves up the searing reminder that there is only one "her" we're talking about, and she is out of line. We must suck the life out of her would-be viability as a candidate.

Language has conveyed an acute gender imbalance for centuries. It's so ingrained, we often only notice when the routine goes amiss. To wit, it took more than four months in the fog of new parenthood to realize that few of my infant son's books contained any female characters. Sweet coming of age vignettes featured boys on fun adventures, boys learning important lessons. Boys doing the growing and transforming.

In 2011, Gender and Society published the most comprehensive study of 20th century children's literature to date. From this we learned that:

We soak up a number of onerous things as individuals navigating an egregiously skewed society. Before we've developed enough to become aware of our faulty thinking, we're preadapted to a world suspicious of girls. At preverbal states, we internalize that girls aren't necessary to the storyline. They aren't noteworthy. Women aren't the norm in fiction or our lived realities. We don't expect to find girls in children's books, and they're
distorted in the glyphs of our times
. As girls, the seeds of internalized misogyny are sown early. 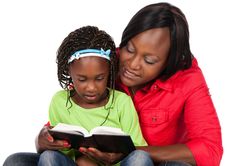 Language provides part of the unconscious infrastructure by which we carry our actions. We learn to disappear ourselves from narratives, to disregard female heroines. We learn to operate our lives outside the frame of the most celebrated domains. We internalize this psychological gesture before we've learned to reason, and it's steamrolled into us as we grow up.

Many of us have developed tricks to work our way back in. We might sexualize ourselves. We might affect charisma. And just as we see within other discriminated groups, we exact lateral violence on each other as part of the internalized misogyny we began to absorb in our infancy. Misogyny gets culturally reinforced throughout our lifetimes, and it also reverberates internally. We judge other women over their personalities, their voices, their looks, their desirability. As a society, we apply unfair standards and we shrink the female identity because it's easier than going through the confusion and discomfort required to correct the narratives about what we expect.

Historically, we know what happens to outsiders. We regard them with suspicion and hostility. When we hold power over another, we can make of their existence what we want by controlling the cultural syntax. "Her," as the interloper, ends up being not just about Clinton. It represents the whole of our attitude towards women. Women are purged from literature and minimized through institutionalized discrimination. We maintain an othered status and we live our lives unconsciously taking for granted the double-standard.

A woman in Clinton's position is faced with the impossible: to please everyone while everything about her is called into question--her appearance, her marriage, her sexual appeal. She must be both mother and monger enough to convince us she could be Putin's opponent. And she could, deftly. In the language of unconscious misogyny, I don't think berners realize what they're peddling.

I'll vote for Hillary if she becomes the nominee. The Supreme Court depends on it, and possibly much more. I want to broaden the old storyline. At some point I'd like to see a left-leaning broad in the White House.