I used to think that the stepparent/stepchild relationship was doomed from the start. To the child, the stepparent was an interloper that stole the biological parent's time and attention with no redeeming benefit.

Let me pause to clarify that in my life I have had 5 stepparents, so I have had the opportunity to live my own test study. I really thought I knew exactly how ill-fated these relationships were. But then I met my ex-husband, and he had a great relationship with his stepfather. Apparently, it was possible to happily coexist after all.

I have recently thrust my own children into the pseudo stepparent/child dynamic. (We aren't married, but do live together.) Because of my own negative experiences with stepparents, I have tried to be pretty intentional in creating a positive family dynamic. 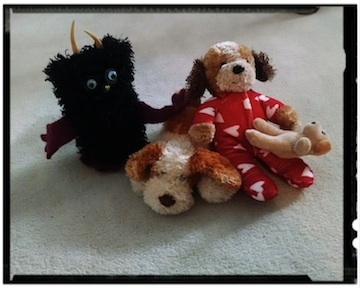 Based on my own personal experiences, these are techniques that have worked for us:

For the Original Parent:

1. Don't let your partner always be the bad guy, especially at first. If the kids need to be reprimanded, you do it. It isn't any fun being the go-between, but in the beginning it's vital to avoid the good cop/bad cop dynamic.

2. Conversely, give your partner a voice. It's equally important to not set up your partner to appear to have no place in the family, and this can lead to an "us versus them" triangulation. Sound a little confusing? It is. Once the children have bonded with the new spouse, it is appropriate for them to enforce rules. The kids are going to push limits--it is what kids do, and both adults need to be respected and have authority.

3. I believe what is crucial is to create a balance of negative to positive reactions between the stepparent and children. They cannot see your partner as the step-monster, and if the children do not discover redeeming qualities in your partner, they are less likely to develop affection and respect.

So, if your partner often tells the children to clear the table or clean up their mess, they also need an equal number of positive interactions, such as playing with the children, doing projects together, etc.

In our house, my SigO is definitely the one who holds a firmer line about cleaning up, but he has also become the go-to guy for problem solving. If one of the boys runs up against something they can't handle alone --such as a math problem or getting a baseball mitt stuck in the basketball net five minutes before the game--they now come to my partner first.

4. Take a step back. I found both as a child and an adult, that the best way to encourage a bond between your new partner and children is to give them time without you.

When my SigO and I moved in together, the kids were not pleased, like at all. They had liked him just fine until we were all sharing a space. I had made the mistake of using the move to totally change the house rules about things like cleaning up after yourself and treating Mom as a waitress. Of course, they blamed the new parent for all these rules, even though I was the one enforcing them.

Then, one day the youngest had a party to go to, and the eldest was sick. I took the little one to the party and left his big brother at home with my partner. I was quite sure I'd return to find one of them duct taped in the closet, and I wasn't taking bets as to which one it would be.

Instead, I found them happily watching Gulliver's Travels. They had spent the day watching movies together. They didn't do much, they didn't talk much, they just hung out. After that, my oldest child's defiance melted.

5. Realize that your job as the original parent will always include monitoring the relationship from all sides.

Not to scare you, but statistically, more children are abused or killed by their father or mother's boyfriend than anyone else. I'm not saying you can't trust your new partner not to kill your children, but it is important to not be blinded by your own neediness to the detriment of your kids.

Outside of abusive situations, though, it is still important to take your children's perspective into consideration. Encourage them to talk to you about the stepparent, and don't just defend your partner. Take the opportunity to explain why rules are important, or why the stepparent may be acting in a certain way, but also just listen. Let your children know that you are still there for them even though there is a new person in the household.

For example, I was surprised to learn that my seven-year-old thought that if my new partner was gone, I would move back in with his father. My ex-husband and I broke up when my youngest was four months old, so he doesn't even have memories of us living together. I had to patiently explain that while Daddy and I both loved him, we didn't live together very well. I was also careful to clarify that my new partner had nothing to do with my divorce from my sons' father, that we broke up years before I met my SigO.

6. Enlist the help of your ex, if possible. I was shocked when my ex has proven consistently to be one of our best allies with the kids. My ex allows them to vent, and is able to relate to the problems of having a stepparent, but he always tells the children that they have to respect my partner as well.

8. Encourage your kids to seek your partner's help in areas. Suggest your partner might be better able to answer a question. Let them see him/her as a valuable resource.

1. Don't force yourself on the kids. Be available, but not overbearing. Invite the children to do things with you, but don't force them to. Let them enter your orbit at their own pace. For example, my ex's stepfather was always working on projects around the house. His step kids were welcome to help, but there was no repercussion if they didn't. Or, in my house, my SigO will sit near the kids on the couch, with plenty of room between him and the kids. Gradually, the boys will move closer and closer until they wind up in a bit of a heap.

2. Try and be funny. For example, we could not get the kids to put their bikes away, but instead of screaming, we hung a bike off the basketball hoop over the kids' heads. They got the point without the tears.

3. This can't be stated strongly enough. Let yourself love the children. Don't hold back out of fear. Kids need all the love they can get, and they don't automatically assume the stepparent loves them.

4. Don't try to win their affection, but make sure they know they can count on yours, no matter what.

5. Realize that although you will never have the same place in the children's hearts as their mother and father, you can have an equally important place in their affection. As the kids reach teen years, the stepparent can often be the one they turn to when they get in over their heads, as that tiny distance can make it a little safer for them to confide in you. I know I told my stepmother things long before I was willing to tell them to my mother.

6. Don't disparage their other parent. It's fine to listen to the children vent about their other parent, but even well intentioned criticism sets the kids up for hostility. Even statements that may seem supportive on the surface can back fire. For example, when I was crying over my something my father did, my mom's partner would rally to my defense and say something like, "I hate your father for what he is doing to you!" Suddenly, I became defensive of my dad. It's tricky, because the stepparent is the natural person for the kids to turn to when they are mad at their other parents, and kids need someone to vent to. Try to keep the focus on the children and their feelings. Let them know confiding in you is not a betrayal of their other parent.

7. When possible, refer to the other parent in the positive. Show that you don't think ill of them. Statements like "both your Daddy and I...." reinforce that you have expanded their family, not invaded it.