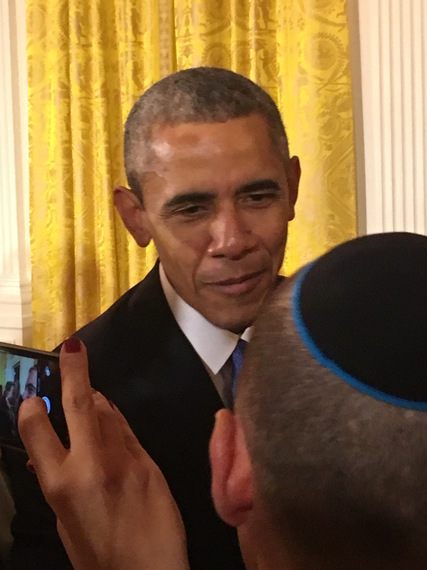 Those of us born in America often take our freedoms for granted. We forget the centuries of struggle that went into creating them.

As an American Jew, I strive to be doubly mindful. The Constitution guaranteed a freedom of religion for which we had yearned for thousands of years. America is a home where Jews have thrived.

Chanukah at the White House

This truth was on my mind last week as I celebrated Chanukah at the White House. Along with a few hundred others, I got the chance to sing the Chanukah blessings along with the President, First Lady, Vice-President. I heard the Marine Corps band play traditional Jewish folk songs. And I ate kosher potato pancakes prepared in the White House kitchen.

My immigrant great-great grandparents could never have imagined this scene. To them it would have seemed like pure fantasy.

In America, however, anything is possible. ​(To get a history of the White House Chanukah party, click here.

The holiday of Chanukah reminds us that these rights wither when we take them granted. Freedom does not sustain itself. The heroes of Hanukah -- known as the Maccabees -- stood up when they lost their rights to worship and practice their faith. They had to fight King Antiochus. They had to say no when he ordered them to place statues of Greek gods in the Temple in Jerusalem.

When we forget our responsibility to guard our freedoms -- when we take them for granted -- we eventually lose them. That is been the fate of every great civilization that came before us.

As Rabbi Jonathan Sacks put it, "The oldest and most tragic phenomenon in history is that empires which flourish eventually decline. Freedom becomes license, license becomes chaos, chaos becomes the search for order, and the search for order becomes a new tyranny imposing its will by the use of force." When we forget to defend what we stand for, we lose it.

Can this happen in America? Absolutely. Judaism had already been around 2000 years when the Maccabees had to defend it. America has only been around for 240 years. In comparison to China and the nations of Europe, we are a young country.

Indeed, Sigmund Freud once wrote that America is an unfinished experiment. We are the participants in that experiment. Chanukah at the White House made me ever more committed to ensuring its success. (To learn who started the White House Chanukah party and why, click here.