This past Sunday morning, Trekonomics, my book project on Inkshares, broke through its funding goal of 1000 pre-orders. I am elated and immensely thankful to all those who backed my work. Here are a few things I have learned.

As they say on NPR's show Marketplace, let's do the numbers. 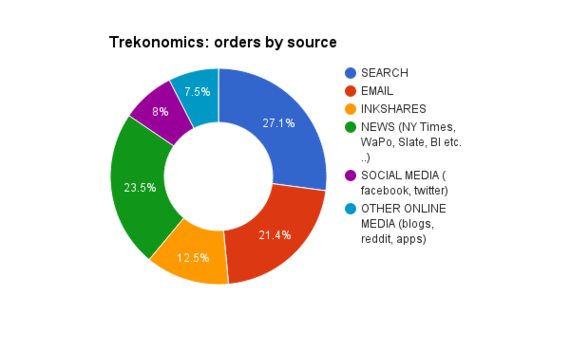 For all its purported powers, social media platforms (specifically Facebook and Twitter) were not significant drivers of sales. This might be due to the fact that prior to launching the campaign, I had neither a Twitter account nor a Facebook page. In addition, the Facebook page for Trekonomics is the property of an awesome Finnish rap band of the same name.

Twitter did send significant traffic to the book's fundraising page. Unfortunately, that traffic did not convert into sales at a high rate (roughly 1.43 percent). Commanding a sizeable social media following is the current anxious mantra of the equally anxious publishing industry. I was told by two agents on both coasts that without followers I would not be able to even pique the interest of a publisher. Either the numbers contradict that hypothesis, or Trekonomics is an outlier.

A possible explanation for Trekonomics' outlier status is the role of the news media. Very early in the campaign, the project drew the attention of Hayley Tsukuyama and Brian Fung at the Washington Post. Felix Salmon and I did a long and nerdy interview with them. The post brought a lot of traffic and got syndicated all over the world, even appearing in French translation in the weekly Courrier International, to my father's and my high-school friends' delight.

That post somehow reached the eyeballs of The New York Times' op-ed pages editors. A few days later I found myself discussing the book on the record with Anna North, culture editor for "Taking Note", the Gray Lady's op-ed section blog. Where the Washington Post was the catalyst, the New York Times story really made the book.

These two articles, posted online with links to the book's funding page, led to a very respectable conversion rate of 7.11 percent. More importantly, they elevated my project's profile and validated it in the eyes of the reading public.

That is not all. From the outset, the book had two key public champions, financial writer Felix Salmon and UC Berkeley's economics professor Brad Delong. When Brad Delong and Felix Salmon put their good names behind a book, or rather the promise of a book pending a pre-defined fundraising goal, people listen. Their pre-screening, for lack of a better word, greatly facilitated my access to established news outlets (most notably Slate and Techinsider.io, Business Insider's tech-focused site).

Felix Salmon created what Inkshares calls a "Collection" -- Piper Text. An Inkshares collection is the internet age version of the old imprint. The collection's sponsor curates book projects to promote. Collections rely on the visibility and high profile of the people behind them. For instance, pop culture juggernaut The Nerdist has an Inkshares collection which surfaces new and exciting voices in sci-fi and fantasy. I believe that the campaign owes its success in large part to being the first book in Felix Salmon's Inkshares' collection.

This proves to me that so-called influencers' marketing really works. Far from me to compare Prof. Delong and Felix Salmon to the Kardashian half-sisters. Yet I wonder what a mere mention of the book on Kim Kardashian's or Pharrell Williams' Instagram feeds could have achieved (Pharrell is one of the most famous Star Trek nerds in the world, his record label is called "Star Trak" for a reason -- if he ever reads this.)

Furthermore, sales numbers indicate that when it comes to books, the old gatekeepers and tastemakers still rule. The validation, the imprimatur, of the established news media remain unparalleled. As the chart attests, articles and features in The New York Times, the Washington Post, Slate and Business Insider turned into a consequential amount of pre-orders (about 23 percent of the total).

The Internet has made it easier and faster to catch journalists' attention (the Washington Post team originally contacted me through Twitter direct messages). But their attention, even more strained by social media, is not unlimited. This is where the reputation of the campaign's early champions made a difference. It helped cut through the clutter and the information overload

In addition, one can see the public influence of Felix Salmon and Brad Delong in the sales conversion figures from online searches (mostly from Google). People heard about the book and the campaign, Trekonomics was in the news and in the air (at least for a small subset of the overall population). Those who were keen on supporting it searched for it and found it. Search accounted for 27.1 percent of all sales, with a stellar conversion rate of 14.48 percent.

Blogs and other online platforms

A few blogs picked up on the project. Their contribution to overall sales was somewhat marginal. Speaking of marginal, there is one very interesting case buried in the data: Prof. Tyler Cowen's and Prof. Alex Tabarrok's blog, Marginal Revolution. The website sent a lot of traffic to Trekonomics' book page, but did not convert nearly as well as page visits would suggest (only 1 purchase for 289 hits). Marginal Revolution and its very active and thoughtful commenters are known to skew libertarian. I assume, based on the pathetic conversion rate, that this was spite traffic, so to speak. I must confess I am somewhat disappointed. I would have expected a bit more sales from the Ayn Rand fan club, if only because libertarianism and science fiction have so much in common.

Trekonomics was put up for funding through Inkshares. Inkshares is both a crowdfunding platform and an old-school publisher. Book projects that reach their funding milestone are edited, printed and distributed by Inkshares. Inkshares has already released a few books under their imprint (most notably Star Wars' screenwriter Gary Whitta's fantastic Abomination). There are more books in the pipeline. I saw the books, I held them in my hands, they are made with great care and the kind of craft that only comes from people who truly value and respect the written word.

But Inkshares is more than a crowdfunding websites and a publisher. It is also a community of writers and readers. JF Dubeau, author of The Life Engineered has described the role of Inkshares' community better than I ever could. The support of Inkshares' authors and readers lit the fuse at the campaign's onset. The crucial importance of that initial boost is not reflected in the final tally.

Well, I did email my friends and extended family to ask them to pre-order the book. It is the least appealing aspect of crowdfunding. To a preternaturally shy and private person like me, it feels incredibly awkward and uncouth. It is almost like pulling teeth. But it does work.

Email accounts for a relatively high 21.4 percent of all orders, with a rather average 2.4 percent conversion rate. Some of my well-meaning friends and family members took it upon themselves to order multiple copies. I had to restrain my sister from purchasing 100 copies and have them sent in a crate all the way to Israel.

I have written a book. Should I crowdfund it through Inkshares?

By removing the first layer of gatekeepers, the literary agents and the editors at legacy publishing houses, Inkshares allows authors to directly test the commercial viability of their work. Inkshares' site is set up to allow readers and prospective buyers to share their comments and feedback. This is akin to what the lean startup methodology calls validated learning: users' feedback leads to incremental product improvements, thus mitigating the risk of missing the mark.

As far as the publishing business is concerned, Inkshares' process of rapid prototyping and users' feedback looks like the future. Thanks to the Internet, it is devilishly efficient at weeding out the duds and at validating books with commercial potential. In addition, it is close to impossible to decide what to read among the millions and millions of books that populate Amazon (whether they are self-published or not). Inkshares solves that nagging problem of surfacing and curating appealing content.

Just like launching a startup, it is not for the faint of heart. It can be brutal for the author. The fruit of your labor crashes into the global marketplace without much of a cushion. It is scary. You can't take it personally but you will, inevitably, because a book is a book, not a software package.

In summary, while my book's lucky break was not planned, it was not entirely lucky either. Consequently, I cannot know whether such outcome is reproducible for every other crowdfunding campaign. That being said, if your work can garner the interest of influential people, and if you can convince them to lend it their support, this will probably raise your profile and improve your prospects.

Overall, Trekonomics reached its funding goal by deploying rather conventional marketing methods. Technology (social media, blogs, crowdfunding platforms) has created new venues for exposure. Yet, in these new spaces, the same influencers, gatekeepers and tastemakers have retained their clout and their ability to steer the public conversation.

The old, tried and true recipes work. And interested readers still seek and value the advice of experts and of reputable news outlets. Ultimately I believe this bodes well for both books and aspiring authors.

As for the publishing industry, I do not really know. Inkshares has allowed me to sidestep the usual intermediaries (most notably, literary agents). The crowdfunding campaign functions as an opportunity to advertise the book and build momentum well ahead of release. I did not get an advance, but I will be paid a significant royalty rate on sales of the book. Above all, Trekonomics received the kind of publicity and earned media that even a highly paid PR firm might not be able to muster. I believe that is a worthwhile tradeoff.