Recently, I had an unexpected opportunity to spend two days at a yoga retreat center in Vermont with about 20 other yoga teachers from the East Coast. The Stowe Mountain Ranch Yoga Retreat Center is particularly known for its "Yoga With Horses Program" put together by Stowe "Namaste Cowboy" Gerry Scott, a creative, energetic, professional equestrian who also practices yoga. I was excited but as I set out, one friend's skepticism rang in my ears: "Yoga I get. Horses I get. Yoga and horses? I don't get it."

I didn't really get it, either. All I knew was that I needed a get away. I'd been feeling sick and stressed out, over-worked and unsure of my path. Still, it seemed a little crazy and even my children (three young adult males), were wary. "Horses are unpredictable!" one warned, "Wear a helmet and watch your feet!" My God, they were beginning to sound like me! Nevertheless, off I trotted on the nearly six-hour journey from New Jersey to the land of maple syrup, Ben & Jerry's and Bernie Sanders (with my dear friend Dee, also a yoga teacher).

A little about the place: Nestled in the Green Mountains at the base of Mount Mansfield (the Trapp Family Lodge is nearby), this 10-plus bedroom retreat center is in a breathtakingly scenic spot. There's an Indian teepee on the grounds with a rushing stream below, scores of classic Vermont antiques in the rooms (think snowshoes and trunks), four beautiful horses, two yellow labs (as in the doggie kind), even some wild turkeys. The horses aren't kept somewhere down the road. Nay, the stables are just a few yards from the ranch house and a spacious 33-mat deck where morning and evening yoga classes are conducted. As we rested in Savasana one evening and the teacher called out, "Sigh and let it all go," Cherie, a Clydesdale Thoroughbred Cross, chimed in with a lovely whinny. Clearly, horses and yoga went hoof and hand here.

The evening of our arrival, we had a "meet and greet" with each other and with the animals. I hadn't fed a horse in many years so I was a little rusty; their mere size was daunting. But as they nibbled feed from our open palms, we did let go of some of that initial worry. I wasn't the only participant who hadn't ridden in a while; one yogi had never even been on a horse in his life.

The next day, we went hiking with the horses and got a brief chance to ride; that night, we enjoyed a bonfire with a country singer, right in the horses' corral. Clearly, the presence of these magnificent animals puts a different spin on life. As Scott explains, "People are more in their head, less in their feelings. Horses are more in their feelings, less in their head. Yoga is more about the latter." Observes Anayra Calderon, a New Jersey-based yoga teacher soon to lead a Stowe retreat, "The program is the epitome of what yoga is." (And so is the center's philosophy of "giving back" to inner city teens, cancer survivors, and others in need.)

The next day, we did some yoga poses on the horses. When I climbed (or rather, was hoisted) up, I was immediately struck by the dense vitality of the animal. The warmth of her body, the sturdiness, the sense of her breath and breadth, took me way back to a time when my own family owned horses and a farm in New York state, long before I was even born. We've lost that connection to land and horses, Scott pointed out. Here was a chance to reclaim it for a moment.

One yogini told Scott, "This is the most feminine thing I've ever done." I sort of felt that too -- not only feminine, but goddess-like. As each took a turn, it became simply about following the heart's calling, movements flowing in a private conversation between one person and one horse (even as we all looked on). And even though we were practicing yoga poses on horses (not to worry, no inversions!) deep down this yoga had nothing to do with asana. It had to do with being here now, letting go, and listening within, with mutual respect, and non-harming. It had to do with, well, the epitome of what yoga is.

Yes, I was getting much closer to what this "yoga with horses" thing was about, and it wasn't about showing off on a horse (though like good marketers everyone ran home to post their shots on Facebook).

Very early one morning, I was awakened by a gentle whinny below my open window. When I gazed out and saw Pegasus, an 11-year-old white gelding, and Black Jack, the Hanoverian horse, nuzzling affectionately in a light drizzle, I sensed the stirrings of a time when connections between man and animal, between man and man, were instinctive, intuitive, and uncomplicated by things like cell phones, texts, and social media. Later, on my way back to New Jersey, I felt uplifted; I realized I hadn't thought about my problems in 48 hours.

When I had set out for the retreat, my best friend (who likes to commune with cows and who knew I was a little bit terrified to get on a horse) had emailed to reassure me, "Horses are very spiritual." Indeed, she was right. In the end, the retreat was not about the physical act of getting on the horse at all, but about a spiritual connection so many of us crave. "Yoga With Horses" is not so much about doing yoga, as about being yoga. The horses had led us from head to heart. I get it now. 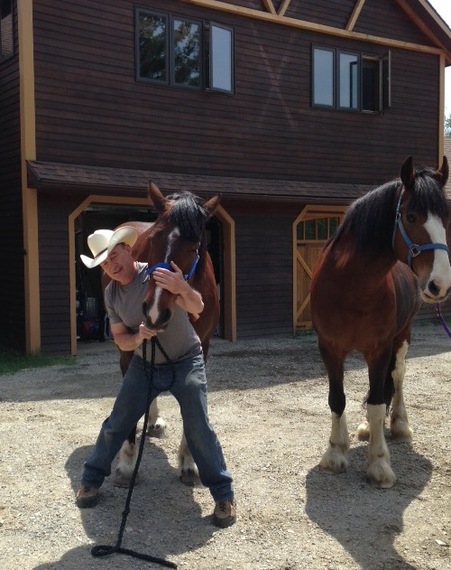