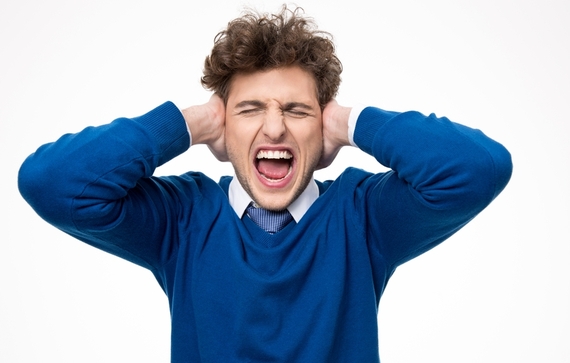 During the course of a lifetime a human being goes through many rites of passage. Birth, for example. First love. The death of a family member and enduring a Republican primary debate. For me, one of the most memorable rites of passage happened in college during my "pledge weekend" -- the weekend I was initiated into a fraternity.

I realize, of course -- especially in these politically correct times -- that college fraternities are rarely associated with anything remotely smacking of insight, awareness, or transformation. But for me it most definitely was -- at least on the rite of passage night I was initiated into Pi Lambda Phi -- an experience now permanently etched into whatever remains of my mind.

To sit blindfolded in a pitch black room, next to 21 of my sweating classmates, all of us holding 17 marbles in our left hands while listening to Ravel's Bolero for 14 hours.

That is not a misprint, folks. Fourteen hours of Bolero. Fourteen.

It is, shall we say, an extremely REPETITIVE piece of music, a kind of mental military mantra, one that requires the kind of refined sensibility to appreciate that none of us in that room possessed. I think the operational word here is TORTURE -- a kind of classical music waterboarding experience I still have not yet completely recovered from. Five minutes of Bolero is usually enough for most people. Fourteen hours is like the last year of a really bad marriage.

Now here's where it really gets interesting. By the grace of the Bolero gods and the fact that the recording we were listening to had been made on a reel to reel tape player, every 17 minutes or so there would be a four second delay before the music looped back to the beginning. FOUR SECONDS. That was it. Every 17 minutes we had a four second reprieve from Mrs. Ravel's lunatic son.

What I learned during those four seconds taught me a lesson I will never forget.

Those four seconds were not memorable because of the sudden SILENCE in that darkened room, but because of what happened DURING the silence -- the space that opened up -- a chance for the 22 of us to enjoy a blast of divine humor -- humor initiated by the youngest of us in the room that day, the Honorable Barry "Spunky Boonbeam" Birnbaum (now a much sought after attorney in New York City). What Barry did during those precious few seconds not only renewed and refreshed us, it most likely prevented the lot of us from spending the rest of our lives in a loony bin.

"Nice beat, but you can't dance to it" was Barry's comment during the first of our four second reprieves. "More bass! More bass!" was his commentary the second time around. "I much prefer the London Philharmonic version", he interjected after Round Three. And so and so on it went, 49 times every 17 minutes throughout that dark night of our collective soul.

The laughter that followed Barry's comments refreshed our minds and rebooted our souls. Humor saved the day. Humor gave us new life. Or as Gandhi once confessed: "If I had no sense of humor I would long ago have committed suicide."

Humor is the great equalizer, no matter who you are and what you do. It opens the heart, relaxes the mind, diffuses worry, energizes, uplifts, renews, restores, and rejuvenates. I like to think of it as one of the core universal truths on planet Earth. Beyond this Earth, I cannot say for sure, other than my current perception that ETs from other planets, at least in the pictures I've seen of them, never seem to be smiling. I don't get it. They are all so serious. All that "advanced consciousness" and still no sense of humor. Really? REALLY?

I have no idea if extraterrestrials listen to Bolero or think George Carlin is funny, but I do know this: HUMOR IS A GIFT FROM GOD. Humor is divine. Humor is wisdom wearing a smile.

Why else do you think the court jesters had the ear of the King?

Mitch Ditkoff is the Co-Founder and President of Idea Champions, an innovation consulting and training company headquartered in Woodstock, NY. He is also the author of the newly published STORYTELLING AT WORK: How Moments of Truth on the Job Reveal the Real Business of Life. While he doesn't hum Bolero at his keynote presentations, he does sign his book.