I was on a bus last week in one of the middle seats, my now almost first-grader by my side. She was holding my hand and peeking every once in a while at the boys sitting behind us. They were giggling. Just as I was starting to revel in the fact that here she was, amidst all her friends, holding my hand, a song broke out. The bus, all of a sudden, was a chorus of kindergarteners singing "Let it Go."

Last summer I lost too many nights of sleep over worrying about my baby starting school. The anxiety started the day I filled out the registration forms and ended some time in October, when I realized it was all probably going to be OK.

Last year, I worried. I worried that I was sending my child into an educational system that seemed to have lost its way -- a system that would dare value her test scores more than her quirks and passions and random questions. I worried that I was sending my baby into the great social unknown -- where kids could say mean things and I would be too far away to heal her wounds with any speed. I worried that I was sending her to the end of her childhood. It might sound silly if you've never sat on the cusp of your first child going to kindergarten, but I had a real fear that she would come home one day and her childhood would be over. She wouldn't want to play and explore, she would stop believing in all the magic she has shown me exists in the world. I know now that this is what scared me the most.

Yesterday, her class circled on the class rug, sitting with legs crossed at the spots marked with their names, the tape now curling at the edges after so many months. They sang a song, their sweet voices wishing goodbye to kindergarten and hello to first grade. And one by one they stood up, holding a sign penned in their own hand, declaring what they'd learned. They'd learned to read, to count to 100, to make friends, to make cool art.

I stood off to the side, my heart beaming with pride, my eyes filling with tears, and wished that I could have known last year, as I lost sleep and grew more grey hairs, that kindergarten isn't about the end of childhood at all. It is so much more about beginnings.

I worried it would be the end of her joy in learning. Instead, it really is just the beginning. Our schools aren't broken. Are they lost? Are there pressures from all the wrong places to value all the wrong things? Yes. Sometimes. But there are also teachers and parents who want so much for education to be about learning. I should have known that. I am one of those teachers and parents. Teachers are there each day for our students. They speak up for class pets, free writing, endless art supplies. They speak out against tests that aren't meant for 5-year-olds, too much homework for kids who should just run out and play. This year of kindergarten has been all about growing and learning. There's a community who made sure of it.

I worried about all of the mean things kids might say. But I forgot to think of all the ways they'd also learn to be kind. Kids can be mean, but they are also full of love. They make cards with misspelled words to apologize for things that they later realize they shouldn't have said or done. They talk about play dates in front of each other without thinking and then learn that next time they need to be more careful about including everyone. They bring each other trinkets, make pictures for each other, teach each other how to draw horses or people or perfect rainbow hearts. They tell each other that they are smart, that they can do whatever it is they want to do, that they should speak in honey voices and leave the vinegar for someone else.

I worried most of all that she would no longer be just my little kid. And I know now that kindergarten is in no way the end of magic. Of childhood. Of racing after fairies and pure joy at the thought of pajama day. As my daughter held my hand that day on the bus, as I listened to the chorus of "Let it Go," I realized this once and for all.

Just that day I had walked through a fairy garden with my small group of kids. I pointed out all the small homes made out of acorn shells and glitter rocks.

"I see one," a boy said, pointing to the bushes filled with small flowers and filtered sunlight.
"Me too!" I said.

And then they all joined in. We walked together through that garden spotting fairies in the dancing sunlight.

I saw magic sparkling in their eyes as they looked for it out in the world.

They stood on the rug yesterday, singing and celebrating their year of reading and I celebrated being on the other side. Knowing now that my fears of what could be, of passion and kindness and magic lost, were fears that never came to pass.

She loves to learn.

She's learned to be kind above all and to expect the same of her peers.

And she draws me unicorns, chases fairies and still holds my hand on the bus ride home. 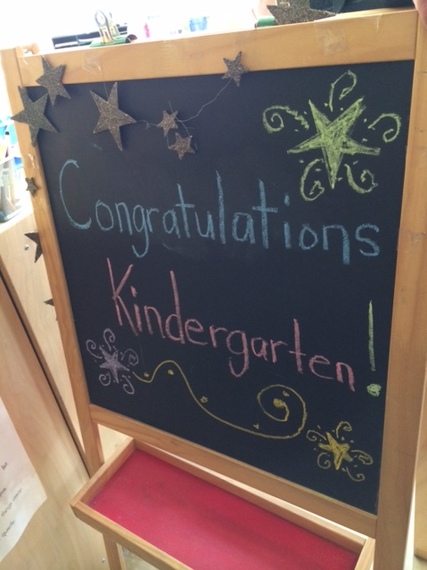