"Everything is energy and that's all there is to it."

Albert Einstein could've been talking about how to book guests on a radio talk show when he said that, because I can't think of a better way to decide whether someone makes the cut. 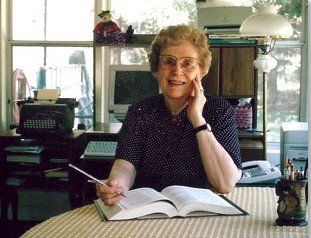 Evelyn Birkby did. The 93-year-old homemaker shared some of her wit and wisdom on The Career Clinic recently, and here's what I learned...

Evelyn had a two-year-old, another child on the way, and cows and pigs to attend to on their southwestern Iowa farm when her husband decided she should submit a writing sample to the local newspaper in need of a columnist. "I don't even know how to spell!" she told him. "I'll buy you a dictionary," he countered. She relented. She got the job, and hasn't missed a column in 63 years. That led to a radio gig on KMA in Shenandoah, eleven books (Always Put in a Recipe and Other Tips for Living was published in September), and a public speaking career.

"Robert knew I'd never be happy just raising children or being a farm wife," Evelyn said. She'd put the word just in quotation marks, the way I was tempted to. For the right person -- not Evelyn, and not me -- making a home is a calling, and she thinks that's wonderful.

It reminds me what I've always thought about a happy family. Is it the most important thing in the world? Probably. Is that all there is to life? Well, no.

Is that why Darrell insisted I write my first book even though I was as busy as Evelyn when her husband encouraged her to write? I don't know, and I find it fascinating I never thought to ask.

Here's what I do know. Before I met Darrell all my dreams were on a list somewhere, and that's where they may have stayed had he not insisted I start picking them off. One career consultant I know thinks we keep our dreams distant as a way of not messing them up.

Thanks to Evelyn's husband and to mine, for our interesting -- though messy -- lives.

2. Don't be shy about asking for help.

One reason Evelyn always had a column to submit was that neighbors and even her kids have stepped in at times. "People like to help," she says. And they like seeing their names in the newspaper as a reward.

3. Take care of your voice.

When we recorded the interview I was struck by how not wobbly Evelyn's voice is. She attributes it to the same things your mother probably harped on. She takes really good care of herself. And while she admits clean living won't guarantee you a monthly gig on the radio in your nineties the way she still has, it hasn't apparently hurt.

Evelyn once decided she wanted to go to Scotland and track down some of her relatives. Her kids passed on an invitation to go with her. So did her husband. She went on the trip anyway. "I learned a lot about myself in that month," she says, "and I think every woman should have some independent corners in her life."

Doesn't that create a sweet, soothing vision to live into?

I've been haunted by this passage from The Bridges of Madison County since I saw that movie when it first came out: "When a woman makes the choice to marry, to have children... in one way her life begins but in another way it stops. You build a life of details. You... stop and stay steady so that your children can move. And when they leave they take your life of details with them."

How much could it hurt, never to completely stop working? It'll fill in some of the empty spaces as they appear. It won't make you miss your child any less when she grows up and leaves home, but it might make you miss you less.

Iowa's best-known homemaker would rather write, and pay someone to help with the housework. So that's what Evelyn does.

6. Prepare for old age, but be in denial about it.

Evelyn and her husband have done some remodeling on their house to prepare for when they're old. But the 93-year-old is quick to add, "Whenever that comes!"

Evelyn's favorite recipe is for homemade cottage cheese. Why? "Because," she says, "it starts with, 'Go out and milk the cow.'"

Evelyn plans to write until the day she dies. She loves it even more than her radio and public speaking work, and her enthusiasm for writing practically crackled through our telephone connection.

It reminds me of the women at the table behind me at a Denny's -- I think it was a Denny's -- during a break in a writing workshop we were attending. They were in their eighties, if memory serves. But that conversation! What editors they were querying with which stories, which agents might be open to a pitch about one of their books in progress. These women had most of their lives behind them, but seemed sure the best parts were ahead.

Work is, to me, a way of mattering to the world. Why would you want to stop?

9. Take care of yourself.

Evelyn has three secrets to a long life. Don't be grumpy. Keep your mind sharp -- don't use drugs or smoke or drink too much alcohol. Drink lots of milk.

While Evelyn plans to write her weekly column as long as she lives, she's already written the last installment. Her son has it, she says, so he can submit it after her death.

The first word, she told us, will be: "Surprise!"

More:
GPS For The Soulasking for helpRetirement
Newsletter Sign Up