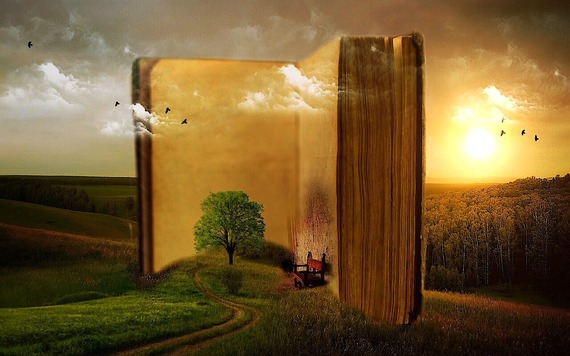 One of my earliest, clearest memories is sitting down, book in hand, and reading. It was Richard Scarry's Busytown and the name "Lowly" confounded me. What kind of name is that? How do you say it? In my mind, I have never not known how to read. It came naturally, just like walking and talking.

Lowly wasn't the only bookworm. I was right there, too. Devouring tomes from the library, from my ever-expanding bookshelves at home and those at school. I read whatever I could get my hands and eyes on... even the musty, outdated Encyclopedia Britannica set we had in the basement.

I remember being so stoked for the annual MS Readathon. This was back in the Stone Age, remember, everything was done via snail mail and when that packet arrived in our mailbox I'd rip it open, grab a pen and start canvassing the neighborhood for pledges.

It was 5th grade, I was 10 years old and we were living in a brand new neighborhood. My parents had been divorced for a couple of years by then, and my mom and her new husband had bought a little house in St Louis Park, Minnesota. My already-bookish tendencies were becoming deeper and bookier thanks to the discovery that the new stepdad was a real 'hands-on' kinda guy. When everything you do, including breathing, has the potential to set someone off you learn pretty quickly to try and disappear, to fade into the woodwork so as not to draw attention to yourself. Books, more than ever, became my escape. The portal to places safe and less scary. Or, in the case of the Stephen King novels I discovered that year, places with even more terrifying citizens- which was oddly comforting.

After all, would you rather be dealing with the meaty fists of a mentally deranged mere mortal, or a teenage vampire hovering outside your bedroom window?

Back to the Read-a-thon. If you're not familiar with the premise: kids had a month to read as many books as they could, which they'd record in a folder from the MS Society. Prior to that, they'd go around and gather signatures and pledges from family and friends and neighbors... people usually pledged a nickel or a quarter per book. Sometimes you'd get a real high roller who'd go up to a buck. All the money raised went to the MS Society. So, the month began and I dove in, rarely coming up for air and when I did it was to mark another book on my list and to grab a new one.

I read 55 books that month and when it came time to collect my pledges, people were astounded. "Wow!" and "Great job!" and then, from one nasty old coot, "Liar." I was standing there, on her front stoop, my collection-gear at the ready: my reading log covered in the titles and author names and number of pages in my hand and the collection envelope provided by the MS Society. I'd given her my results and explained how much her pledge amount came to and "we take cash or checks, ma'am". Again, she said: "Liar. How dare you say you've read that many books! I don't believe you. I'm not paying." The screen door she slammed in my face was decorated with delicate aluminum curlicues, which I looked at while quietly stating, "But, I did."

That didn't deter me, however, it only taught me that even kindly looking matronly ladies could be dicks. Later that year I received a letter from the MS Society informing me that I'd read the most books in my age group, along with two complimentary tickets to ValleyFair, a nearby amusement park. Suck it, mean lady.

As I grew older, the reading continued and eventually I began writing, too. When I was in the 6th grade the Star-Tribune, official newspaper of Minneapolis/St.Paul, announced that they were starting a weekly pull-out section. It was called The Smile Factory and it was a mini-paper for, and by, kids. I was hired as a reporter and contributor and it was the first time someone paid me for my words. Writing became second nature to me, and in the pre-computer days I filled up journals and notebooks with handwritten ramblings. Of course once Al Gore and his Interweb came along, I set up shop here.

I went through reading phases: poetry, Oprah's picks, historical autobiographies, self-help. Eventually I ended up married with kids and it became my job to instill a love of books into my soft and impressionable babies. Which I did, and succeeded. All the while, I still read. Not at the pace of my youth, of course. Who has time in the midst of homemaking? But the nightstand always held at least one book and when there was energy and quiet, I'd read.

Then, the divorce happened. And just like that, it seemed as though the reader in me died.

Actually, a lot in me felt dead then. It was the equivalent of a deforestation, a clear-cutting of my soul. When you go into survival mode, the tiny luxuries of your past life fall by the wayside and your vision becomes tunneled. I had one goal, and that was to make sure my kids had what they needed. When I wasn't with them or working or sleeping or crying in the shower, I was burying my head in the soothing sands of coping, of getting by, of making it to the next minute/hour/day/week/month/year. Reading was replaced by mindless Netflix binges, nights out (or in) with friends, wine and food being gobbled up instead of words. The old me no longer existed and for a long, long time I didn't crack a book.

But like those decimated forests, the old me wasn't really dead. It was just sleeping. And slowly, as the pieces of our lives started falling into their new places and the matter of the kids and I surviving was no longer up for debate, it woke up. It's almost as if something inside of me switched off in order to conserve power, like the Xcel Saver's Switch on our air conditioning unit. Somehow I knew that for me, reading a book was a little bit like falling in love- and I didn't have it in me to do that. Not just yet.

The ALL CLEAR finally sounded and old me tentatively peeked out...checking to see if it was safe. One book at a time- page by page and chapter by chapter- I came alive again. I had forgotten what it felt like to get lost in another world, to let someone else tell their tale and take me by the hand as we traversed the roads they'd been on. I found my reading spot, which is our porch, and although I now have to either wear my drugstore readers or else take out my contacts in order to see the print on the page it's just as easy as it ever was to submerge myself into those pools of prose and float, peacefully.

I knew I was back when I found myself sobbing, as softly as I could, one night. Over something in a book instead of something in my life.

This has been my season of reading. My summer job is a lot like my school year job (secretary) except this year we are running out of a different school and there is nothing for me to do aside from help the occasional walk-ins with enrollment questions and to buzz the door open for the summer school families. At first I killed the time by perusing Amazon but after I found a 2 lb bag of Gimbal's gluten-free licorice in our mailbox I knew there had to be a better and less-fattening way to while away the hours.

It all started with a battered copy of Where'd You Go, Bernadette which was languishing in the staff lounge and went from there. I dug out a Jodi Picoult book from the back seat of my car, pried off the grape Jolly Rancher that had adhered to the page edges and ate it up (the book, not the candy- doy). A lovely parent at school loaned me her copy of The Widow. A blogger friend wrote a steamy novel, Beyond the Break and much to my lonely libido's dismay, I read it. My daughter and I hit the thrift store one day and there was a Jennifer Weiner book I'd somehow missed, Wild by Cheryl Strayed and The Glass Castle by Jeannette Walls. Right now, I'm halfway through Dandelion Wine by Ray Bradbury and if I hadn't borrowed it from a coworker almost every page would be marked with highlighter...it's that's good.

You wouldn't believe how many pages you can get through when you're tethered to a desk and all the fun websites are blocked (about 250 pages if you really want to know).

Next week, the normal grind commences: back to school time means a crazy-busy couple of weeks for those of us in the office. I'll be losing this forced quiet time, these rare and beautiful hours with nothing to do but bounce on my ball-chair, greet people and let myself get lost in someone's story.

I won't stop reading, though. Not this time. I won't lose myself again.


More:
divorceSelf HelpHappinessbooksLife After Divorce
Newsletter Sign Up
An essential daily guide to achieving the good life
Subscribe to our lifestyle email.
Successfully Subscribed!
Realness delivered to your inbox