How do I say this?

There comes a time, maybe long after, when you ask yourself why you wanted to serve the nation. An old poster tells me why I signed on: 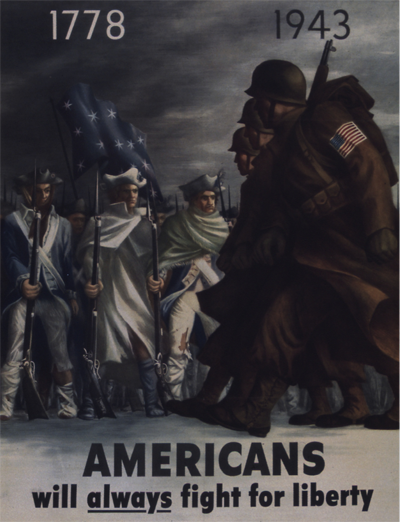 In the entire grand poster field of World War II memory, full of hope and promise -- even swagger and boasting -- this poster stands out as a unique call to duty.

We are not winning here -- there is not even a promise of victory. Instead, ancestral ghosts are in formation for review. Is this still a beginning, or is it maybe a last hurrah for America? The spirit-soldiers are as stone-faced and grim as the winters at Valley Forge and the mountain fastness of the Wachtung had made them.

Parading before them are the men now marching to the same dread uncertainty, in another war where American existence itself is in doubt. In the bitter winter of 1943, Rommel laid on a terrible defeat of American forces in Tunisia, 52 Soviet divisions were destroyed in the third battle of Kharkov, and convoys HX-229 and SC-122 lost 22 ships to U-boats. It was a grim March for the Allied cause.

So America's soldiers pass in review, from light into shadow, into fate's storm. Yet the Continental veterans are bathed in storm light, the kind you see in a lightning strike, or a moment's crack in dark clouds.

The GI's faces are turned -- a grimness highlighted by absolute anonymity. What does this mean? The message is this: We Americans are all in, and all in this together, and it is no longer about us anymore as individuals, but about us all together. We fight together; we sacrifice together; we live or die together.

Thus the motto is most important of all: Americans will always fight for liberty.

A poster about existence chooses its words carefully, and chooses them well. This is not a struggle for "freedom" -- it is a struggle for liberty. But liberty has the same Latin root as the Anglo-Saxon frēodōm. So what is the difference?

The usage of liberty has taken a distinct path in modernity. For example, while we say we give a people freedom, or even "liberate" them, we cannot give them liberty. Liberty is a self-made state of political realization that must be self-proclaimed, fought for, and won. It is the opposite state of being, say, the passive recipient of American altruism, like in Operation Enduring Freedom or Iraqi Freedom.

Moreover, as George Orwell so archly reasoned in his guide to Newspeak, even in the all-grinding tyranny of 1984 you could still say: "The dog is free of fleas." Free is a loose, generic, individual, and even momentary state of mind and being.

Liberty, in contrast, is the living embodiment of the collective oath of a people -- and will ever be thus. So when the poster invokes liberty, it is speaking directly to the survival of Americans: Americans who can survive only by living in liberty.

Would that I could say, this July 4th, that I am the citizen of such a nation!

To the contrary, I see a nation committed to the defense of tyrannies that are nothing less than an abomination on humanity. I see a government that arrogates to itself the right to assassinate anyone on the planet that it deems displeasing. How many movements against tyranny and injustice has the United States sought to destroy, or fought relentlessly, or strafed and killed, simply because they threaten the cruel despots we call "friends and allies?"

Meantime, our military far more closely resembles the resplendent British regiments our Continental veterans once met in battle -- even if their digital camo looks nothing like royal scarlet and gold. General officers act like courtiers, and pin stripe courtiers ape the Roman Cubicularii of the imperial court, desperately seeking face time with the emperor. The radiance of our palace precincts on the Potomac far outshines the old limestone digs of the Sun King.

Yet what of all those fine officers I have taught, and with whom I served these years? They remain the stalwart and the good, like great rocks in a sea, to be used up by the system, where the waters rush over them, inexorably wearing them away.

And the people, for whom The Fourth is simply sunny respite for family BBQ, fireworks, and flat screen action, where have you been? Where have you been while the grand enterprise of the imperial state has played out its game of "strategic competition" and forever war these fifteen years?

Thus, in every great nation in every time, the idea for which we serve is always lost, long before the fall.

Michael Vlahos signed on to naval service in November 1974, serving also in the State Department and CIA, most recently teaching at the US Naval War College.