"Just give it two weeks," my mother told me, as I sat on my bed, desperate and fumbling to get my new baby, Charlie, to latch onto my breast. "I can't do this," I said through tears, worrying that I was going to starve him somehow. I'd learned in a breastfeeding class before his birth that a newborn's belly is roughly the size of a marble, and a small amount of colostrum could go a long way, but the hospital pediatrician had made me doubt my body's ability. His parting words, before I'd left the hospital earlier that day, were something about my baby losing too much weight and how, if Charlie didn't start eating more, he could have a stroke, or something equally as terrifying. Oh, and "Congrats on the beautiful baby. "

Welcome to motherhood. I had refused to supplement, even after the nurses had urged me to do so, sure that my body could provide nourishment for my baby. After all, "breastfeeding is natural," I'd been told over and over again; but, secretly, the doctor's words had filled me with dread and doubt. Breastfeeding definitely didn't come naturally to me. No amount of reading or classes could have prepared me for those first several weeks (or months) of breastfeeding, but what they did provide was the resolve that, no matter what, I could do this.

"Change positions," my mom suggested, as she watched me struggle. Oh, the football hold, forget about it; I was barely managing the cradle position, and I was near-certain that breastfeeding was a three-arm job. I'd only been successful so far when the nurse came in and shoved my boob, not so gently, into the little guy's mouth. How could I possibly do that on my own? I called in my sister to give me a hand, literally. I'd learned quickly that there was no modesty in breastfeeding. When the lactation consultant pulled the curtain in her office the next morning, I thought, "Why bother?" My breasts were no longer my own. As long as I could get my baby to eat, I didn't care who saw them (or handled them) those first few days.

With help from the lactation consultant, and the fact that my milk came in later that night, go figure, my baby began to gain weight immediately. Each day at the doctor's office, as the nurse laid Charlie down on the scale, I was filled with a nervous anticipation. When the numbers stopped, revealing he'd gained a few ounces, it was more exciting than any time I've ever stepped on the scale myself; even watching the 50 pounds I'd gained during pregnancy slowly slip off over the subsequent months couldn't rival the joy of seeing Charlie gain. It was thrilling to see his weight go up, knowing that he was thriving, in large part, because of the nourishment my body was providing and my determination to continue trying.

But still, nursing was hard, much harder than anyone had warned me. "Just wait a month," my mom encouraged me by phone a couple weeks later, as I sobbed from my rocker, feeding the baby who I'd concluded was switched at birth with a tiny barracuda. He thrashed at my breast as he ate, ripping my poor nipples in the process. They cracked and bled, and, at one point, an entire chunk was gone, seriously, gone. I was sure they'd never be the same again.

"You can stop," my husband told me. "You don't have anything to prove. Plenty of healthy babies drink formula." He was right, but I wasn't breastfeeding my baby to prove anything. I was just feeding him the way I thought was best, the way I'd planned to do. My supply was abundant, and I didn't have any health reasons stopping me; I felt fortunate for the opportunity to breastfeed, when I know some others cannot, and so, I pressed on. I had rid my home of the numerous samples that formula companies had sent to us, and had shared my coupons with others who needed them. I didn't have a backup plan; I'd made sure of that. It would have been too easy for me to give up if I had.

"By six weeks you'll be fine," my mom promised, as I downed a couple ibuprofen, the only thing that allowed me a bit of comfort in those early weeks. Even she surely doubted herself by this point. Maybe something was wrong with me. Maybe I wasn't cut out for this. The lactation consultant checked Charlie's latch again. "It looks good," she determined. "You're doing everything right." I wasn't assured.

No one had told me it would be this hard. My younger sister was gleefully nursing her 5-month-old and often shared about the beautiful bond it created between her and her daughter. Meanwhile, I clenched my jaw every time Charlie latched on, and I often pulled my T-shirt into my mouth to bite down on as he began to eat. After a few seconds, I'd relax. Don't get me wrong, Charlie was such a cuddly baby, and I loved each moment he spent sleeping in my arms, his closed eyes resembling those of a baby lamb, tiny U's with long lashes that seemed to almost smile at me as he dreamed. But how I dreaded each feeding.

"Eight weeks is the magic number," Mom promised, trying to recollect her own memories of breastfeeding and hoping she was right, for my sake. The soreness was intense, but starting to be overshadowed by the sweetness of the tiny hand reaching up on my chest, fingers wide then curling shut, grasping and rubbing my collarbone as my baby suckled.

Eventually, my mom got it right. When all was said and done, it took a little more than two months before I felt somewhat comfortable nursing. And over time, it got easier and actually enjoyable. We had a few more obstacles along the way, including teething, but I continued nursing Charlie for 13 months, and, for us, despite the difficult start, I couldn't imagine any other way.

I do wish I had realized that just because something is biological or natural, doesn't mean it comes without struggle. It's such a simple thought, but I think it was lost on me in those early days when I was short on sleep and high on anxiety. I thought I was doing something wrong, because I didn't have that beautiful experience early on that I'd heard about. Ultimately, I'm glad I saw it through, because now, as I hear the sigh of my new daughter, asleep beside me in her bassinet, and as I watch her rosebud lips suckle as she slumbers, I don't dread her waking to eat, because I know when I get through the pain, something truly beautiful emerges. 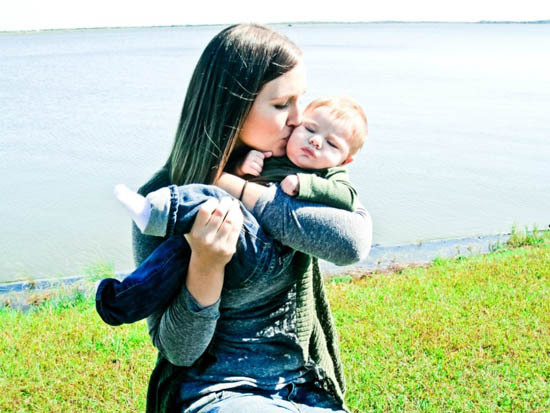 US Presidential Election 2020
Breaking news, analysis and the latest polls on the presidential race from HuffPost’s politics team
See More
More:
advice for new momsnew momsBabiesmomMotherhood
Newsletter Sign Up
Raise the kind of person you'd like to know
Subscribe to our parenting newsletter.
Successfully Subscribed!
Realness delivered to your inbox