"You had a beautiful baby boy." Those were the first words I heard after my child was born. I named him Daniel and started dressing him in clothes made for boys. But, raising a child is often full of the unexpected. 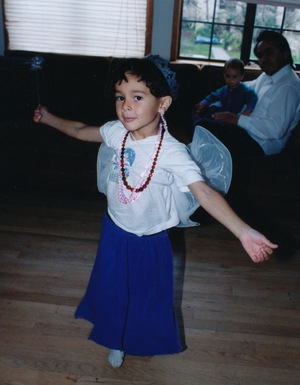 It soon became obvious that Danny was different than other boys. He loved Barbie dolls, dressing up in skirts and shimmery things, and preferred playing with girls. I didn't know there were other children like Danny, and felt lost. Was there something wrong with him? Was I failing as a parent? Over the years, I've learned some things about gender that could have saved me from worry and made me a more supportive parent. I'm sharing them now, in hopes that other parents can benefit from my hindsight.

1. I wasn't alone. Now, there are many more parents, like Lori Duron and Cheryl Kilodavis, writing books and speaking out in support of their children who don't fit gender stereotypes. There are terms like gender-creative, gender-expansive, and gender-nonconforming to describe our children. A study by GLSEN and Harris Interactive found that nearly one in ten elementary school children say that the way they look or act doesn't fit expectations based on gender.

2. There was no reason to limit play or clothing based on gender. A child of any gender can love dresses, dolls, action figures, sports, ponies, pretty things, trains, sweatpants, pink or blue. Restricting toys and clothes based on gender limits children's development. It is natural for children explore and healthy for parents and caregivers to support this.

"Because gendered toys limit the range of skills and attributes that both boys and girls can explore through play, they may prevent children from developing their full range of interests, preferences, and talents." Dr Elizabeth Sweet

3. My child didn't need fixing. I thought maybe Danny was confused about his gender or didn't like being a boy. I wondered if I should steer him in a different direction and tried to help him befriend other boys. Now, I realize that I was the one who was confused. Danny was just expressing himself freely and exploring who he was without being limited by gender.

4. Trying to change him would have hurt, not helped. Pressuring children to conform to gender norms can be harmful to their health and wellbeing. He faced a lot of pressure and teasing from other children and even some adults. He needed a safe haven at home.

"Even when motivated by a desire to protect your child, asking them to mask who they are sends the harmful message that there is something fundamentally wrong with them." Gender Spectrum

5. Gender is much more complicated than either/or. I didn't realize that I was stuck in a binary way of thinking about gender. In this gender binary, there are only two genders. Everyone has to follow the rules for the gender they are assigned at birth. My thinking was turned around when I discovered that there are many different genders, and many ways of expressing gender. The problem isn't the people who don't fit in the binary, it's a binary that doesn't fit who people are. Now I understand that Danny's way of expressing himself was one of many in an endless world of possibilities.

6. Genitals don't determine gender. When Danny was born, the doctors took one look and determined that he was a boy. It turns out they were right, but at the time, none of us really knew what his gender was. Why? Because there is a difference between assigned sex (based on genitals and other biological traits) and gender, which is a person's own sense of who they are. This brings me to something else I didn't know...

7. Being transgender is completely natural and healthy. By the time Danny was about three years old, I started wondering if he was transgender. Now I know that many children and adults identify as a different gender than they were assigned at birth. Some identify as neither boy nor girl, or have a fluid gender identity. This is completely natural and is not the result of confusion or mental illness. A recent study showed that transgender children who are supported to live openly are not at high risk for mental health problems. Knowing this would have made it easier to support Danny if he had been transgender.

Danny grew up to be an out, proud, gay man. Some people say that he is gay as a result of my parenting, but that's a topic for another day. What's most important to me is that he's perfectly happy with who he is. So, am I.

Visit Out Proud Families for information and resources.

Coming this summer: One-of-a-Kind Like Me, a children's book based on Danny's childhood.