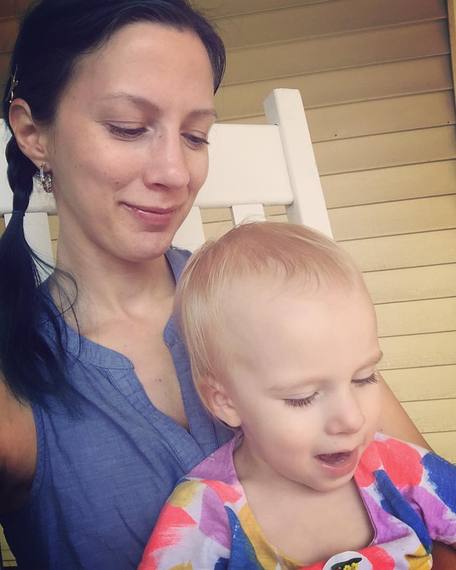 I wish someone had told me having a second child was completely different than having my first. Sure, I was told this, but it was mostly about the physical challenges of juggling more than one child.

I was warned about things like "adjusting from one child to two is hard (but after that adding additional children to the family is a relative breeze)." I was told breastfeeding is different because we have another child who needs us and not as much time as we want to cuddle and nurse our new infant.

Less often did other mothers share with me the feelings they struggled with, that no one else saw -- besides maybe in the form of under-eye circles, easy to pass off on lack of sleep -- but that were at least an equal struggle to things like diapers and fatigue.

I want to share with you these feelings of mine:

I wish someone had told me to still buy that beautiful baby book, but that there's a reason why nearly everyone I know with more than one child has primarily the first written in elaborate detail -- or written in at all. I could have used the encouraging reminder that my celebrations of all my second child's firsts were just as ecstatic and love-filled, although I documented them with less ease.

I figured out for myself, too, that "the village" will change and shift. Life, in general, always shifts and changes, especially when children are involved. My friendships became not less important, but even less accessible with two children than with one. It takes even more effort to stay in touch and plan get-togethers. I wish someone had shared their loneliness after having a second child with me so I felt less alone in feeling it myself after giving birth again.

I wish I had listened more closely when the people who love me told me I was as good of a mom with my second child as I was with my first. I wish I had believed myself when I knew I was raising her with the same passionate love and effort, even if I often felt not good enough. I wish someone had told me that adding to our family would be better than I could possibly have dreamed, while also being emotionally harder than I was prepared for.

I wish I had expected to have a fresh resurgence of the ugly sting of mother guilt as both my children got older, when I finally had to send my oldest off to school. My main happiness in my firstborn's growing up -- besides her own school-loving joy -- was knowing I would have more time with my second born. But it's still not the same. I can't be too far from my daughter in kindergarten in case she would need me, so there will never be those multiple-hour-long drives to the grandparents' house or all of the same "Mommy and Me" experiences I had with my first child. I wish I'd been more aware that truly every step with a second child is fresh, different and new.

My second child is every bit as new, fresh and beautiful to me. And it is different -- she's different; I'm different, too.

She still has all of me. She has my whole spirit infused into her growing up -- this is the same as my first -- and that's where this abundance of mother guilt comes from -- it comes from knowing we are putting everything we are and can be into this moment right here with our children, equally understanding we wish we could do more.

My second child is every bit as new, fresh and beautiful to me. And it is different -- she's different; I'm different, too.

I turn over this mother guilt in my heart, and then I discard it. I discard it because I don't have any more energy or love to give than what I'm already giving. I throw away my internal nagging that I'm not being a "good enough" parent because the biggest part of me knows that I'm offering her all she knows and expects. (And it's this fragile awareness that inspires us to want to give to capacity.)

I'm doing my best -- I really am. We all are. Is it good enough? Hopefully. Will we mess up? Absolutely. I'm 100-percent positive I've screwed up with both kids, just like I'm sure I've done great things, too.

She has the benefit of my knowing myself as a mom. I've accepted with alternate frustration and grace both my capabilities and my limitations as a mother. I'm a more confident mom this second time around. I've learned, too, what to stress over and what to take in stride. I've learned to appreciate how fast babyhood leaves, how quickly toddlerhood arrives, and how precious, if exhausting, it really all is -- and I've learned it in time to consciously remind myself to slow down and live abundantly right where I am.

I wish someone had told me that as unique and brand new as my second child is, I am reborn as a mother through her birth. I am forever different and newborn myself, and, just like with our children, there will be challenges and shining beauty in it.

And both of these girls, born four years apart, carry my heart -- cheesy and true. (This I didn't need to be told, having felt already the indescribable sensations of becoming a parent.) They hold me inside of them without even knowing, which is what makes parenting so special -- we see these small people for exactly who they are, having dreams and fears for what they might be, while they are innocently ignorant (for a while at least, until they grow). And in that while, when my kids can see my flaws but can't yet name them, I stand rooted for them -- I stand solidly behind them, in that kind of love parents offer best.

Later, I'll let them know I'm more than aware of what I've done right and wrong in their lives. I'll hope they'll listen to me when I offer that life isn't this black and white, or right and wrong, and that the miraculous thing about love is that we are so filled with it that we have enough for everyone in our lives we want to share it with.

The real reason I wish someone had shared some of this with me isn't because I didn't expect it--it's not because I was unaware I would be a different parent with a different child at a different time in my life. Instead, what I really could have used is another loving voice gently nudging my heart with her whisper that a lot of the feelings I struggled with were normal, and OK.

Because my children are both loved, and not equally, but individually. Uniquely.

Voting Made Easy
Register to vote and apply for an absentee ballot today
Register now
More:
Parentssecond child
Newsletter Sign Up
Raise the kind of person you'd like to know
Subscribe to our parenting newsletter.
Successfully Subscribed!
Realness delivered to your inbox