One night, years ago, when I was complaining (again) at dinner about having to spend so much time on the inter-tubes responding to trolls disputing the science of climate change, one of my sons wordlessly got up from the table, walked out of the room, and a couple of minutes later returned with a piece of paper with a cartoon on it. That cartoon was my introduction to xkcd and the work of Randall Munroe.1 It was taped to my office door the next morning and I've been a fan ever since.2

Munroe self-describes as a former NASA roboticist with a degree in physics. His regular cartoons are brilliant, insightful, enlightening, funny, and tackle subjects that range from "omg" to "I won't even attempt to describe it." A couple of years ago, Munroe began a parallel effort called his "What if?" blog, providing "serious scientific answers" (accompanied by his trademark stick figures drawings) to "absurd hypothetical questions" posed by his readers. Many of these questions and his answers have now been compiled in a brand new book from Houghton Mifflin Harcourt Publishing, New York, due for release September 2nd. Here is a picture I took of him, since the one on the book's dust jacket is no good (it's just a head shot): 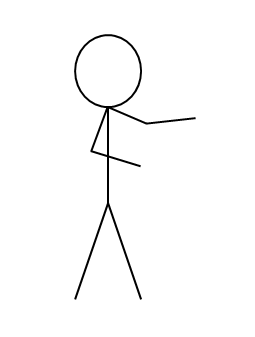 For some reason, his publisher thought I was worthy enough to receive an advanced copy.3 I've just finished reading it, cover to cover, and it has solved my annual birthday-present and holiday-gift dilemmas for a large group of people.

I say the questions Munroe tackles are bizarre, but actually most of them are pretty cool:

Munroe must get thousands of questions submitted by readers. He answers a modest subset of those that not only pique his interest but are amusing and offer the potential to use real science to explore concepts, the world around us, and day-to-day mysteries of life and the universe.

What makes Munroe's work so fantastic is a combination of two elements: his commitment to trying to answer even the weirdest question with solid science, and his undeniable sense of humor.[citation needed]

I love back-of-the-envelope calculations; they were a major (and most important) part of my undergraduate and graduate science education. Anyone can pull an equation out of a textbook to solve a basic physics or engineering question, but most of the world's (and literally out-of-this-world) interesting questions can't be answered just with textbook equations. They require guesstimates, simplifying assumptions, and cross-disciplinary science skills (from physics to biology to chemistry to engineering). Munroe combines all of these with the ability to explore different paths to answers that enlighten, amuse, and inform, all together.

He also obviously gets piles of questions that he can't or won't answer. These fall into his category of "Weird (and Worrying) Questions from the What If? Inbox" -- a selection of which he includes in the book along with hysterically funny comments in the form of his stick figures.5

So, here's a "What If?" from me: If everyone on the planet simultaneously bought a copy of this book, stopped what they were doing and read it cover to cover, would modern civilization and our global economy collapse? It's worth trying the experiment.6

Footnotes
1. It was also an early introduction into the fact that my children had somehow become wiser and more internet savvy than I would ever be. "Digital natives" my (also wiser) wife calls them, as opposed to "digital immigrants."
2. Just to admit how old I am, that cartoon is taped on my door next to The New Yorker cartoon by Robert Mankoff "No, Thursday's out. How about never - is never good for you?" And I cut that one out of the magazine myself.
3. Making me feel pretty special, though perhaps they published 7 billion of them and sent one to everyone on the planet. If so, I don't want to know.
4. Admit it, you wondered about this right around the time the proctor said "Begin now."
5. Interestingly, all of the creepiest were all submitted by the same person: someone named Anonymous.
6. No disclaimer from me. But read the disclaimer in the book right before his Introduction.
7. And yes, read every one of his footnotes, too.