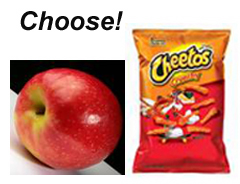 Everyone knows that obesity is a major health problem in the USA. One estimate suggests that 30% of health care costs (actually the cost of sickness care) can be attributed to the consequences of obesity.

Obesity clearly reduces productivity. Thus from the national commercial standpoint, obesity produces a double whammy: it both reduces revenue and at the same time increases costs.

While there are some endocrine conditions and genetic disorders that predispose to obesity, the vast majority of obesity is culturally driven and over-eating is under conscious control.

If you exercise properly and eat right, most obese people would not be obese. Unfortunately, unhealthy foods are generally cheaper and much more available. Worst of all, people are programmed to think they taste better.

Consider obesity from the standpoints of three different people: provider, taxpayer, and President. The health care provider doesn't care about your weight other than the medical complications. It is part of their moral code to provider services to sick people regardless of all other factors.

Both healthy-sized people and super-sized people pay the same amount into the healthcare system. Yet the super-sized take more out because they require more health care services. The healthy-eating taxpayer feels this is unfair.

Finally, imagine yourself the CEO of Corporation USA, also known as President of the USA. Your primary goal is to protect and nurture the nation as a whole. In contrast to either the provider or the taxpayer, you have power. You can encourage passage of laws, rules and regulations. You have influence over the tax code.

So, Mr. CEO of Corporation USA, what can you do? You can change incentives. You know that incentives affect behavior and behavior determines outcome. If the people ate more healthy foods, they would be less obese. Health care would cost less and productivity would increase (the reverse of the double whammy above).

Finally, Mr. CEO, you know that carrots work better than sticks. It is always better to offer a positive incentive to encourage the behavior you want than to punish the behavior you do not want.

If you want to reduce obesity, instead of punishing super-sized persons, subsidize healthy foods. Make them cheaper and more available. What if apples and legumes were easier to come by than coke, french fries and cheetos?

What do you think about subsidizing healthy foods?