I had forgotten that during Felix's infancy, and before I had launched Gimme the Good Stuff, I sometimes wrote about my pregnancy, birth and postpartum period before falling asleep at night. I recently found the entry below, and it brought me some comfort as I have again been fretting about not loving the baby I've been gestating for the last 39 weeks. 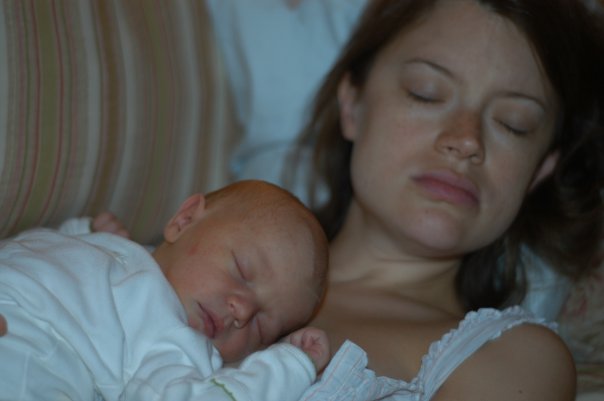 I spent pretty much my entire pregnancy convinced I wasn't going to love my child. While other moms-to-be claimed they fell head over heels the minute they saw the plus sign on the EPT, my reaction was ever-so-slightly different -- in that I burst into tears, felt like I couldn't catch a full breath and demanded that Daylon -- at that point, my boyfriend for less than a year -- schedule an appointment for an abortion immediately (note that up until this moment, I'd always said I would never, ever be able to have an abortion, no matter what the circumstances).

It wasn't that I didn't want kids or that I wasn't sure that Daylon was the person I would eventually have them with. It was more that none of my friends were talking babies yet. I was only 28 years old and had just moved in with Daylon and I was enjoying our new life together. In my mind, kids were still many years away.

As we were on the first day of a week-long Caribbean vacation when I found out I was pregnant, there wasn't much to do besides stop drinking margaritas and wait until we got home (the fact that I immediately stopped drinking makes me wonder if I was REALLY so sure I didn't want the pregnancy, although at the time, I told myself it was only because Daylon was having such a hard time hiding his excitement -- I had to at least PRETEND to weigh the options).

The next day I started spotting. And weirdly, I was devastated. Hold on. Shouldn't I have felt some relief over a potential miscarriage? Yet somehow, it again felt like I wasn't being given any choice in the matter -- I had in no way wanted to get pregnant, but I also hadn't definitively made up my mind to abort the little lima bean. (Of course, I thought that I HAD made up my mind, right up until the blood showed up on the toilet paper.)

In the end, I didn't have a miscarriage, and I decided to marry Daylon and have the baby. But still, I fretted about the lack of real affection I felt towards the fetus as the trimesters slipped by.

During my ninth month of pregnancy, Daylon assured me that if I didn't love our son, I could leave and he'd raise him and wouldn't even hold it against me. I hate to admit that this possible out gave me some comfort.

During labor, I still felt nearly nothing towards the little human causing me such exquisite pain. The nurses kept saying things like, "Don't you want to meet the baby?" or "He has blonde hair! Do you want to feel his head?" Of course, I couldn't tell these benign women that I didn't give a shit about his head.

When Felix finally came out -- all 9 pounds, 4 ounces of him -- I felt more relief than love. It was over. Never mind that I was now being stitched up for 45 minutes -- compared to the sensation of a contraction (I didn't have an epidural), this pain felt like acupuncture.

So now, Felix River was here. No longer a fetus, but a baby. And even during the first few days of his life, I'd look at him more with curiosity than any genuine love.

Then it changed. And rather than feeling a wave of relief that I wasn't a evolutionary freak and was indeed capable of loving my offspring, I was terrified. Oh NO. I love this human more than anyone else EVER. More than Daylon. More than my own little BROTHER. What if something happens to Felix? What if he's not happy and safe every single second of his existence? How will I cope? How will I ever leave him to go back to work for even 15 minutes a day?

Felix is one month old at the time of this writing. And my vehement hope is that as he gets older, I can scale back on how much I love this objectively-funny-looking-yet-beyond-perfect-to-me little creature. Because the burden of loving someone as much as I love him right now makes it hard to catch a full breath.