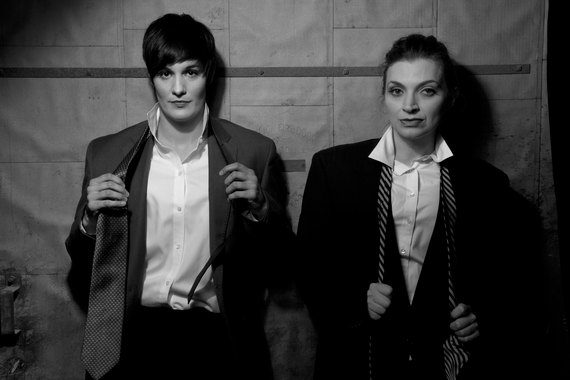 It's time for Feminism and Musical Theatre to get in bed together.

A while ago I read Michael Riedel's New York Post article, "A feminist war is being waged at Broadway's Waitress," about how the creative team behind Broadway's Waitress is letting their feminism cloud their judgment regarding the production. Waitress has Broadway's first all-female creative team. It's the story of a woman from a small town who is stuck in an abusive marriage, who expresses herself by baking creative pies. I was lucky enough to see the pre-Broadway production, starring Tony Award-winner Jessie Mueller, at the American Repertory Theater this past Fall. Full disclosure: I loved the show and Jessie is a friend. So, I'm biased.

I hated Riedel's article. Besides the obvious snark and condescension that the article was dripping with, the thing that disturbed me most was Riedel's last statement: "Let's leave domestic violence to Tennessee Williams and David Mamet." This got my blood boiling. Are women not allowed to tell difficult stories from a woman's point of view? Is musical theatre not allowed to cover real-life topics? Do we have to leave that to the "serious" male playwrights? Can musical theatre not have a message--and may women not be the purveyors of that message? This article helped illuminate the inequity and, frankly, the intolerance of women in musical theatre.

There are more female actors than there are male in musical theatre and fewer roles, and not by a little. The ratio of male to female roles in musical theatre is shockingly unbalanced. Even some of the great iconic roles in the musical theatre cannon: Evita, Aldonza, and Mary Magdalene (in Evita, Man of La Mancha, and Jesus Christ Superstar respectively), are in shows where almost every other role is played by a man. Musicals that are heavily cast with women, like Nine or Company, may give a lot of female actors work, but the show is still all about the man.

Women are also grossly underrepresented behind the scenes. In my hometown of Chicago there are only a handful of female directors, music directors, technicians, and musicians who are regularly employed by our hundreds of theaters.

And it doesn't end there. Logically, it would make sense that if we are putting up shows that are tailored to men, written by men, about men, directed by men, and cast with mostly men, then men must be our largest audience demographic, right? NOPE. Not even close. 68% of the Broadway audiences were women in 2014-2015. Sixty-eight percent. It doesn't even make good business sense to tailor specifically to men.

With all of this in mind and with my recent statements about my dissatisfaction with non-inclusive casting, I started Firebrand Theatre with my most trusted colleague, Danni Smith. Firebrand is a musical theatre company committed to employing and empowering women by expanding their opportunities on and off the stage. That's our mission statement. We are the first feminist musical theatre company in the world, and that gross article by Mr. Riedel reinforced the importance of a company like Firebrand and how far we still have to go for equality in our chosen art form.

When Danni and I decided to embark on this journey together, I did some research: I did an online search of "feminist musical theatre." Do you know what showed up? Nothing. Nada. Naught. Zilch. Zero. Zip. There are a few articles, and there is a book you can buy on Amazon. But, actual theatre companies that only do musicals with a feminist or women-centric mission? None. I began to get really angry. Why wasn't this a thing? Why is there this huge void? And more importantly, why had I just accepted that this was the way things are for the last 15 years of my career?

So how do Danni and I plan to fix this? The first thing is very simple: We hire more women. We just hire them for pete's sake. We hire female directors, music directors, casting directors, choreographers, musicians, lighting designers, sound designers, costume designers, and so on. How do we expect a woman's point of view to be celebrated when everyone crafting that point of view is a man?

Firebrand will pick shows that showcase women rather than marginalize them. Will this be easy? No. I applied the Bechdel test to every musical I could think of and the results are depressing at best. And in my opinion, passing the Bechdel test should be the bare minimum. There is some really good material out there: Anything by Michael John LaChiusa or Jeanine Tesori passes every feminist test I throw at it with flying colors. Traditional material can also be re-imagined to fit our criteria. We are going to go back to the text every single time to see what it requires; We will not just do what has always been done.

Even with existing material that features women prominently, and even with creative re-imagining of shows that could be made to do so, the options will run out because, sadly, musical theatre is even more behind the times than non-musical theatre. The barrier breaking shows on Broadway right now--Hamilton, Fun Home, Waitress, etc.--will not trickle down to the regional market for many years to come. So we remain behind the times, and we don't want to wait for these titles to be available; We want change now.

So, the biggest thing we are going to do to combat this problem is to add to the canon. At Firebrand we will be commissioning new musicals that fit our criteria of both employing and empowering women--New works will have to pass the Bechdel test and the Firebrand Test.

The Firebrand Test:
In this work, there are at least as many women as men in the cast, it lends itself to inclusive, diverse casting, and it empowers women.

And just so we're clear, we love men and we want to employ them too. We just want to tell stories that celebrate men and women in service of evening the field. Our ideal scenario is that one day we won't have to use the term "feminist musical theatre." One day it will just be "musical theatre." That day is not today.

So I would like to invite Mr. Riedel and others who share his views to embrace feminist musical theatre; It will make for more interesting storytelling when women in musicals play something other than "the virgin," "the whore," "the mother," or "the hag." It will make our art form all the richer when we are representing everyone's point of view.

Is this something you can get behind? Do you think musical theatre could use a makeover? If so, I invite you to donate to Firebrand Theatre below. We want to change the face of musical theatre and we want you to be part of that movement.