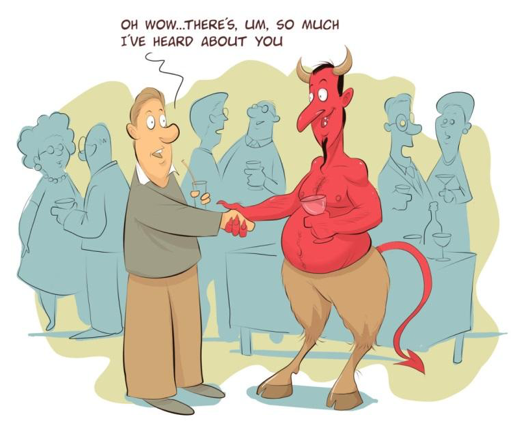 It used to be that friends and acquaintances were mystified at my interest in liberal-conservative dialogue - "why would you spend time on THAT?!...Whatever floats your boat, I guess."

Not anymore. America is having a rude awakening about the value of dialogue and deliberation practices these days. REALITY itself has become their best advertisement.

At the center of the harshest rhetoric (from both sides of the political spectrum) is one essential claim: Those Other People (on the other side) are dangerous. They cannot be trusted and do not have America's best interest at heart (and if they say they do, they're basically lying through their teeth...).

In short, Those People are Demons Incarnate...and must be treated as such.

More than simply deceived or short-sighted or corrupt or hateful, guess what? You Are The Devil. Or a Monster (Or Both!)

However silly that may all sound, let's be honest: most people actually believe adherents of that Other Political Party are the Great Evil facing society.

Is that true for you? If we're honest, most of us might admit to harboring at least some of this accusation...am I wrong?

What if, fellow citizens of America, that caricature is simply NOT empirically, verifiably, actually TRUE?

What if closer examination revealed that (eureka!) people holding disparate socio-political views are equally good-hearted and care the same about ensuring America's well-being....but (gasp) have very different ideas about what that requires!?

Thousands of years ago, one of the world's earliest scientists invited people to try a ground-breaking experiment: to regularly sit in silence and turn towards (rather than away from) inner contradictions in body, mind and heart.....As people tried this radical act, they were surprised to find the gnawing tension inside us change. And insight arose...with suffering almost always decreasing too.

In recent years, the dialogue and deliberation community has been pleading - in every way we know how - to invite people towards a similar radical experiment: instead of avoiding painful questions, to begin sitting with our political opposites and turning towards the contradictions between us. Listening and getting curious...maybe with some chips and salsa thrown in just for kicks.

Why? Because we know from our own experience that this gnawing tension (between us) can change. Insight can arise and suffering decrease. As Public Conversations Project puts it, Shifts Happen!

As part of this, people often come away with the ground-breaking realization that thoughtful, good-hearted people disagree on pretty much...um, everything!

Do you want to know this for yourself? If so, it's your lucky day: because this Radical Experiment costs no money. And requires only one night of missing The Walking Dead.

Are you up to it?

For most Americans, the answer is pretty simple: NO.

Last year, we decided to try a full-court press. First, we made a press release to local newspapers and radio stations offering free consultation to anyone willing to try a Living Room Conversations (with anyone they wanted, on any topic). Next, I went knocking doors inviting people in my own neighborhood to give it a try. These were people I knew well and had grown up with (people who would have to buy girl scout cookies from my children).

The result? I was turned down right and left (and in the middle too). You would have thought I was inviting people to try an elective colonoscopy - "no seriously...it only hurts a little."

I was baffled. Why so much resistance?

In the aftermath, Liz Joyner, national director of the Village Square told me, "Jacob, there is something we like about the polarization; something almost reassuring about knowing that Our Side is inherently superior to Those Demons."

No wonder people didn't want to talk! What I thought was an invitation to a nice neighborly interaction was, in fact, messing with some serious Tribal Dynamics. And those Tribes are in no mood to fraternize right now!

Like little kids who have been convinced there really are monsters under the bed, we've become almost scared of getting too close to each other (or just too angry).

Stewing in those bitter juices, no wonder we'd rather opt out. Why would anyone be crazy enough to Dialogue with the Devil?

Here's why: Because chronic resentment hurts (a lot!) It does something to the body, the heart - and our overall health. That same scientist (called the Buddha) warned thousands of years ago that anger functions like a poison in the body and mind.

If he was right, America is now suffering from a poisoning epidemic on a vast scale.

If that's true, the antidote isn't going to come from a grand policy fix or a million dollar research and development team.

It's going to come from you and me...and the space between us.

If that still scares you, here's our promise: If you can rustle a little courage to make this happen, your fear of Those People will decrease - with other things emerging: affection, interest...fun?

And best of all: the Demon Story will go away...for good.

That doesn't mean the disagreements go away. In fact, some of the differences on our team of long-time dialogue partners are as real and serious as ever. The difference is that, well, now we can actually talk about them!

And we do it all the time - and have a blast doing it! (Did I mention that we always come away with new insights on seemingly irresolvable problems too?)

Let's do this, America! Believe it or not, there's something WAY better than the creepy comfort of knowing the Other People in America are out to Destroy Us All.

It's called Seeing Each Other. For Real. Outside of the Stories.

And outside those Demon Stories, guess what? Those People are pretty darn likeable.