Exactly seven minutes into her first morning of daycare, my daughter took a giant step. Well, it was actually a pretty small, shaky step, but the important thing is -- it was her very first step.

I know there are plenty of moms who would kill to watch their baby take her first step, even if it was witnessed on a video monitor in the daycare director's office while filling out the last of the paperwork. But I don't have a baby.

Who doesn't walk yet. Who only knows two words so far. Who has no idea that I'm "Mama" and my husband is "Dada," much less her own name.

When I quit my full-time job to become a fuller-time stay-at-home-mom, I had such grand plans. I'd frolic around the park with her, hear her accidentally swear when she learned to say "truck," teach her all the lyrics to Pearl Jam songs, chase after ducks with her. Who doesn't want to chase around ducks together, for crying out loud?

I did none of those things with her last week.

I did, however, enroll her in speech therapy, developmental therapy and physical therapy. Right after I scheduled her adenoid removal surgery, because for her whole life, I just thought her loud mouth-breathing was cute. Like an adorable snorty piglet. Not like someone who's experiencing an airway blockage of 90% (!!???!).

I know deep down that she's the little person she's meant to be and that she's on her own journey and that she is in fact human -- not a snorty piglet. But I can't get one irksome question out of my mind:

What if staying home was the wrong choice?

It was a no-brainer decision for me at the time. But now? Now I demand her daycare providers have Master's degrees in Early Childhood Development, yet my own childcare expertise amounts to Google image-searching various types of pediatric rashes. (Don't ever do this. Seriously.)

While I'm scrambling to get her into social environments chock-full of her peers, I'm thinking back on all those months spent isolated in our home during a long, dark Chicago winter. I don't think I pulled out flashcards once the whole time. Was I supposed to?

This is the part of the post where I think I'm supposed to begin my reassuring message to other parents experiencing the same feelings. I'd write something like, "but I know I'm the best mom I can be," or "my best is better than enough," or "I shouldn't be teaching her, because my daughter is teaching me."

Not gonna write it. Sorry. I'm not there yet.

Right now, I'm in that middle place. That I-wish-I-was-at-the-part-where-the-lesson-reveals-itself-and-also-we're-chasing-ducks-together place.

When they say that being a parent is the hardest job in the world, I guess I thought "they" just meant it as a generic round-up of the no sleeping/constantly diapering/colicky crying rodeo. Not that parenting is actually a technically difficult job at which you can actually perform poorly. Or at least, certain parts of it.

In seven minutes, a total stranger was able to help her do what I haven't been able to do in nineteen months. I thought I'd be upset, but I wasn't. I was relieved that someone could do the job.

Because right now, this whole situation feels more like an internship, not the high-level executive position I expected it to be. And this is a company I'd like to invest my future in. 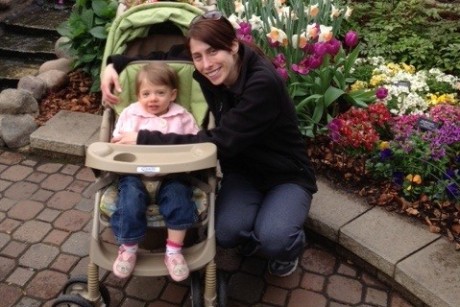 More:
parenting adviceMomsBabiesParenting Parents
Newsletter Sign Up
Raise the kind of person you'd like to know
Subscribe to our parenting newsletter.
Successfully Subscribed!
Realness delivered to your inbox