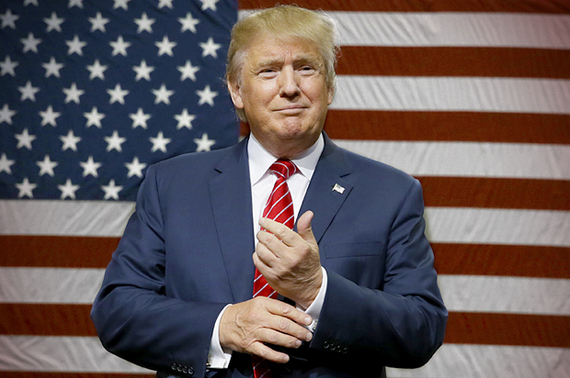 What is the best we can hope for a Trump presidency?

If Trump's election proves anything, it is that the ideas which used buttress the old ruling elite no longer hold sway. The voters wanted change, and now the world is about to find out what change Trump can really bring around.

Maybe he really will drain the swamp of D.C. corruption, and take money and special interests out of politics, as he promised.

Maybe he really will keep the United States out of international squabbles we do not belong in, which were brought to us by Neo-Conservative Republicans and Democrats alike.

Maybe he will even drag Republicans into investing in a trillion dollar infrastructure project, rebuilding our bridges and roads. Incidentally, such an investment would put a lot of blue collar workers to work.

Certainly, Trump has identified the problems of our era. He won because he vowed to dismantle the political and economic establishment, whose policies have been betraying the middle class for the last 20 years, and people believed him.

Remember that, not so long ago, Trump was a fairly liberal New Yorker.

He was pro-choice. He was for a national single-payer health plan (a much better option than Obamacare).

Trump once proposed a substantial "net worth" tax on the assets of the wealthy, which he admitted would cost him personally hundreds of millions of dollars.

He supported normalization of relations with Cuba.

He was opposed to the war in Iraq.

"Look at the war in Iraq and the mess that we're in," he presciently told Esquire Magazine in 2004. "I would never have handled it that way. Does anybody really believe that Iraq is going to be a wonderful democracy where people are going to run down to the voting box and the winner is happily going to step up to lead the country? C'mon. Two minutes after we leave, there is going to be a revolution, and the meanest, toughest, smartest, most vicious guy will take over."

Trump is a throwback to "yesterday's liberalism" of the '50s and '60s, according to George Mason Law Professor Francis H. Buckley, a Trump supporter. Those Democrats were "strong nationalists" who were opposed to open borders and liberal immigration policies.

But Trump knew he could not win the presidential nomination as a Democrat. So he began to tailor his positions to seek the Republican nomination.

Good politicians have always "misled" their audiences with promises they could not possibly keep. A politician should not have the same opinions and concerns during the primaries as he has during the general election -- and while governing. That would be stupid. Campaigning politicians are expected to charm and cajole relevant constituencies, to pander, to bob and weave, and to continually cobble together disparate interest groups. In other words, they need to be convincing actors like Ronald Reagan or FDR.

Trump has always been exceptionally gifted in this regard. He is a salesman par excellence, the ultimate flim-flam man. But it is all a performance.

The important thing to focus on now is that behind layers and layers of attention grabbing, hyperbolic and racist rhetoric, Trump framed the key issues -- of lost jobs and a lost American Dream -- in a dramatic and polarizing form.

Trump is a blank slate, a political cipher. He is certainly no ideologue. His only constant promise has been to do "what works."

It is impossible to predict what Trump will do. Regardless of what he has said he will do, and he has said a lot of outrageous things -- build a wall, create a mandatory registry for Muslims, abandon NATO -- we must now consider what Trump will actually do.

Trump is a Wild Man. He will not be tied down. He certainly does not share the interests of his political allies -- nor will he be likely hemmed in by Republican conservatives.

Maybe, hopefully, Trump will shuck off the confining policies of the Republican establishment and operate as the independent renegade, the listen-to-no-one Hell-raiser he has been for forty years.

Maybe Trump will forge a new coalition with many Democrats and break the stalemate in Washington. The first indicators of Trump's path forward will be who he appoints to his cabinet. If it's more of the same, then woe to all of us -- we're back with the status quo.

Don't forget that much of his support came from blue collar workers, stolen from under Hillary's nose. The most significant Trump upsets came in states where Bernie Sanders had defeated Clinton by large margins in the Democratic Party primaries.

Trump cannot abandon this fundamental working class base. And yet, this will not sit well with conventional Republicans.

Trump needs to be the agent of revolution. His victory is a mandate for change, similar to the social impulse that inspired the Occupy Wall Street Movement.

What Trump has done now is occupy Washington. We will see if he can rise to presidential greatness.

For this, Trump will have to channel his inner Bernie Sanders.

When Harry Truman was elected in 1948, he was considered by many to be an uncouth, vulgar, buffoon with a violent temper and an inclination to violence. He once threatened to punch an opera critic in the nose because the critic panned his daughter's singing.

But Truman turned out to be one of our best presidents because he was right on the big things. It is possible that Trump is too. But then, maybe not. Trump has always been his own man no matter what his appointed advisors tell him to do.

Maybe this is all a pipe dream. What if Trump really has become the repulsive clown that he has pretended to be in recent years? Possibly.

What if I am only projecting and seeing what I want in our next leader? Possibly.

And Trump's election certainly is a crisis.