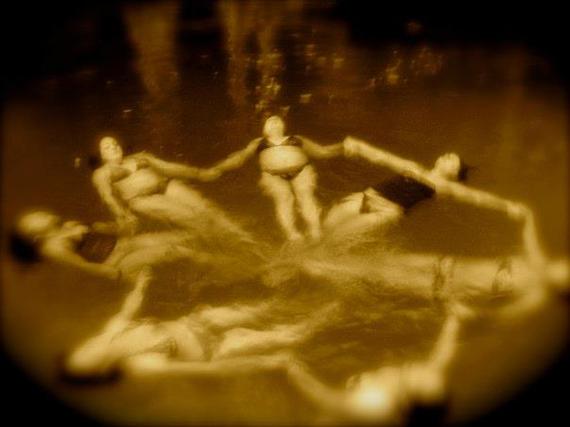 Menopause is a process of distillation that reveals our core, our essential self devoid of those internalized "shoulds" that society usually bombards women with. This insight has helped me understand what The Change really means, and, as a Midlife Midwife, it is the foundation of my healing practice. I deeply believe that the transformative portal of menopause--if we do it consciously and paying attention to our deepest desires--, can take us to a fulfilling and empowered second half of our lives. After having worked with dozens of midlife women over the past several years, I have found this to be the most effective and sustainable approach, one that I first tested on myself.

In medical terms, menopause is marked by the cessation of menses due to a rebalancing of a woman's hormonal system at midlife. Perimenopause is that transitional stage women go through as their bodies, minds and spirits adjust to this change.

The information is out there, and now that women don't have to cover their mouths and lean into each other when talking about the M word, they are more aware of the issues raised by this passage and more open to talking about their personal journeys. They are also confused with the barrage of sometimes conflicting data that many times advocate using all kinds of meds to ease the pain of the journey. This is concerning because, with over 48.5 million women going through menopause in the US, they have become a profitable niche market for the pharmaceutical industry. Often using fear tactics to market to an educated, aging population eager to find solutions to what some feel is a betrayal of their bodies, many times midlife women end up disconcerted, seeking solutions outside of themselves, when they are actually well equipped to manage this transition anchored on their own innate power.

What if, by deeply reconnecting with our bodies and inner landscapes, we would come to terms with those at times frightening menopause symptoms as important physical signs of meta-physical imbalances that are at the root of this transformation? Would it be empowering for women to experience the hot flashes, the night sweats, the debilitating insomnia, mood swings and irritability as part of the alchemy of menopause? What if, like so many ancestral communities, we celebrated menopause and embraced it as a transformative rebirthing process towards a fulfilling second half of a woman's life? Would the collective consciousness be lifted with this owning of everyone's wellbeing?

Would this reframing mitigate the fear, the confusion, the shame that many women experience when entering this portal? Would this way of experiencing menopause support women in reclaiming their power to walk in confidence--even in the throes of a hot flash--, knowing that they are supported by a community that understands this cycle as a rite of passage, a retrieval of their authenticity, maybe relinquished during their younger years?

Over a decade ago, after I had completed my menopausal journey--a portal I traversed, I have to confess, not in a very mindful way--, I was fortunate enough to run into Joan Borysenko's work, especially The Woman's Book of Life: the Biology, Psychology and Spirituality of the Feminine Life Cycle. This book opened up my eyes to the spiritual dimension of the change I had just gone through, somewhat inattentively. I had not had severe symptoms (except for considerable weight gain, that I rationalized was part of the aging process), so I continued to barge through my life without heeding the signs that it was time to make serious changes.

When I read Borysenko's interpretation of those menopause symptoms caused by the heating up of the body, everything started to make sense to me. The author proposes an analogy to the increased temperature in midlife women's bodies with a meditation practice exercised by Tibetan monks called Tumo yoga.1 This exercise requires the raising of the monks' body temperature, to burn away "mistakes, erroneous beliefs, and ego attachments" that prevent them from recognizing fully "the nature of their True Self" (145). Interestingly, Tumo means "fierce woman" in their language, and it signals "the life force energy of every human being (regardless of gender), that circulates in thousands of small channels called nadis, similar to the accupuncture meridians" (Northrup 142).

Borysenko concludes that it would be empowering for menopausal women to reframe their symptoms in light of this spiritual practice, by "consciously thinking of their self-limiting beliefs, erroneous thoughts, stresses, and ego attachments and allowing them to be burned up in the inner fires of transformation" (141-2).

What if we educated children from a very young age to honor and respect the aging process of women (and men!) and invited them to look forward to the wisdom years that allow for freedom and expansiveness? Would girls educated in such a way still suffer at midlife the pain of moving through the blocks erected by layers of social pressure and disempowering self-hatred?

I imagine a world where women of any age are free to be themselves as whole human beings, expressing their uniqueness in such a way that their bodies would vibrate to the tune of their authennticity, never having to face physical blocks during their life transitions. They would come together to celebrate life and gather in circles to share and to support each other, the best medicine for bumpy times. This is what I want for myself, the women I work with and the generations of women to come.

1. The source I quote from is Christiane Northrup, M.D., The Wisdom of Menopause: Creating Physical and Emotional Health During the Change. New York: Bantam Books, 2012.

Sirena Pellarolo, Ph.D., is a board certified Holistic Health Coach, international author and speaker and founder of the private Facebook group "The Vibrantly Healthy Menopausal Woman." Sirena supports midlife women to manage their symptoms naturally and rebirth into a vibrant second half of their lives. She is co-author of Success in Beauty: The Secrets to Effortless Fulfillment and Happiness (2014) and Menopause Mavens: Master the Mystery of Menopause (2015). Her forthcoming Recover Your Juiciness: A 30 Day DIY Guide for an Empowered and Healthy Menopause will be out in Spring 2016 by Flower of Life Press.
Her upcoming Post-Holidays Guilt-Free Virtual Cleanse, is a proven way to jumpstart the release of physical, mental and emotional toxins in a safe, personalized and effective way.