Disruptive technologies love to take over, but what if we could disrupt the disruptive, before it disrupts us? What if we could get ahead of the raw commercialism that tends to co-opt new technologies, as in video games of smash-squash-crash-kill violent special effects. What if, instead, we could co-opt that trend toward degradation and create alternative content that turns the wheel the other way, for example, more toward peace? Idealistic and utopian perhaps, but these questions seem to be at the heart of the extraordinary work of pioneering media artist Ellen Sandor and (art) -- truly art to the nth power. Her new show, "Deconstruction in the Virtual World: Building Peace by Piece," is conceptual, tangible and intangible all at once and, working with long-time artistic collaborators Janine Fron, Chris Kemp, Diana Torres, and stephan.com, as he prefers to be known, Sandor here continues her amazing quest to make the invisible visible. It is a definite do-not-miss.

On exhibition now at the old world classic and stately National Arts Club in New York City, but likely to tour thereafter, the show is all new world experimental, in content and media, dizzyingly defiant, literally and figuratively. Put on that prototype Oculus Rift and take off. But not into the virtual world where crass business would be likely to take us--where buildings are to be blasted apart as a pastime for a society perhaps too easily addicted and bored. Instead, the show travels us through the amazing maze of architectural and artistic genius. A pioneer of digital art, Sandor has truly taken apart, brick by brick, some of the world's most iconic architectural masterpieces--built and unbuilt, real and imagined--re-building them into entirely new expressions that are works of art in themselves. These PHSColograms are a new form entirely that fuses in 3D virtual complexity the attributes of Photography, Holography, Sculpture and Computer Graphics. And who knows what these new inventions will become when Sandor begins her next big project, a residency at the Fermi Lab in Illinois, America's premier laboratory specializing in high energy particle physics.

In the New York show, I walked around each piece in awe. Here were images of the familiar wonder works of Frank Lloyd Wright's Robie House, and Mies van der Rohe's Farnsworth House, real and classic, as well as never built confections, such as a proposed hotel designed by Antonio Gaudi that might have stood, and been blown up, in the site proposed for the work once upon a time-- where the World Trade Center eventually was placed. Even Frank Gehry's massive silvery rippling Pritzker Pavilion at Millennium Park in Sandor's hometown of Chicago is magnificently deconstructed before our eyes, and we become the mesmerized explorers of beauty and art it is in our DNA to be, if only beauty and art emerged more than their opposites as our lives unfold. And, as if indeed to remind us that architecture and design are all too easily themselves co-opted, Sandor and (art) offer the piece "Interior of a Barracks at Auschwitz-Birkenau," based on drawings left behind by a Holocaust survivor that Sandor located during a collaboration with Steven Spielberg's Shoah Foundation.

Each turn of the head answers the "what if" questions, for here the virtual is at Sandor's disposal, liquid time in the hands of the artist, all boundaries erased. When I took my turn at the 3D table, I confess to feeling whoozy, but I still wanted more, for here the inert had become fluid and the fixed was on the move. Plus, the technology itself is breathtaking, all the more for being alien to me.

And yet, even though the work defines the cutting edge of tomorrow, the question what next takes us in a way no further than the beginning-- the original nugget of the original impulse--the human imagination of the artists that gives rise to the work and the vision. Technology remains, in the end, merely their tool and, in the case of "...Peace by Piece," for the betterment always within our grasp.

T.S. Eliot famously wrote in his poem Little Gidding, "We shall not cease from exploration, and the end of all our exploring will be to arrive where we started and know the place for the first time."

Ellen Sandor and (art) take us on just such a journey. Disrupted and yet still whole. 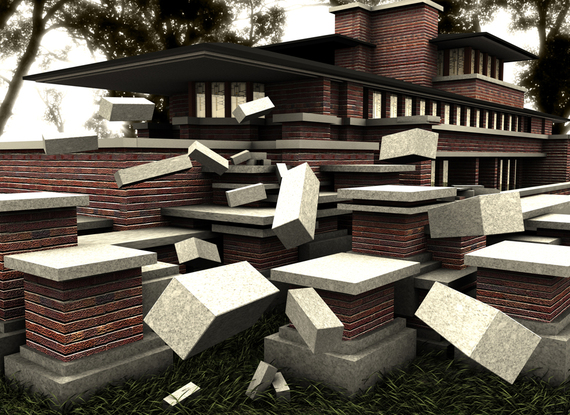 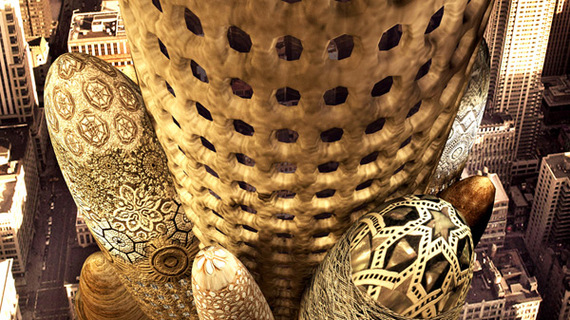