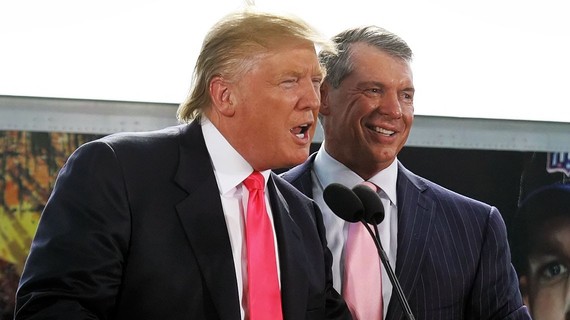 An hour into my female cousin's recent engagement party I found myself in a position familiar to most men at a family function -- sitting in an all-male circle separated from the rest of the party's social happenings like some sort of middle school prom. Ladies, we don't mean to do it, it happens on a molecular level; like animals sensing an impending earthquake or the Kardashians finding even more ways to make us nauseous.

Our conversation varied from sports to, well, sports. Finally, however, we turned to the only professional realm currently, and surprisingly, more entertaining than athletics; politics. Specifically, the walking circus (like him or not) that is Donald Trump. What followed would be called by one knight of our round table "the most fun I've ever had in my entire life". This man, mind you, is married and has a child.

We began pondering the reality of a Trump presidency and soon started to wonder who The Donald would pick as his running mate if he does actually secure the Republican nomination. After a few educated offerings, someone threw out a name that would open up flood gates even Noah couldn't withstand. My father, of all people, thought of the only person on earth who could match Trump's massive ego, perpetual brashness and willingness to do pretty much anything for the sake of ratings: World Wrestling Entertainment CEO Vince McMahon.

At first the suggestion served as nothing more than a chuckle-producer, but then an eerie, anticipatory calm came over the group as we starting contemplating this possibility. Of course the chances of a Trump-McMahon ticket happening are about the same as the chances of Trump letting a little kid tug on his hair Miracle On 34th Street-style, but in our desire to keep the amusing conversation going we were able to conjure up just enough evidence to justify entertaining the idea. After all, Vince's wife, Linda McMahon, was twice Connecticut's Republican nominee for U.S. Senate. Furthermore, Trump and McMahon do have a well-known pre-existing friendly relationship, as Donald has actually appeared on numerous WWE events -- even "beating up" Vince and shaving his head at WrestleMania 23.

Now that we had our "justification", we turned our attention to the rest of the United States government -- specifically, which WWE Superstars the Trump-McMahon ticket would appoint to which posts. We pulled up the official list of White House Cabinet positions and one by one our group of five began matching wrestlers to government gigs.

Five (yes five) extremely anti-social hours later, the exhausted committee finally had our list. This was no easy process. We faced many obstacles along the way -- most notably the hourly "You morons are STILL doing this?!" visits from our confusedly-repulsed female counterparts (see Bill Burr's "simple male brain" rant on Conan). But in the end we came up with a government roster that our inner child wished were real.

Before you read the list, keep a few things in mind. After filling up all of the actual Cabinet positions, we took the liberty of throwing in a few non-Cabinet jobs for fun's sake. Also, young people, the ages of our committee members were 28, 28, 30, 31 and, well, I'll courteously call my dad "over 50". So don't expect to find some noob on here (did I use the word noob right?). Lastly, it's a list of professional wrestlers as government officials, please do not take anything you're about to read too seriously.

So, without further ado, I give you a glimpse of what your United States government would like under a Trump-McMahon administration:

President of the United States - Donald Trump
Don't like it? You're fired!

Vice President of the United States - Vince McMahon
Instilling confidence in the people every time he power-walks through the streets of D.C.

Speaker of the House - Macho Man Randy Savage
A gifted orator who would whip congress into shape with his intimidating rants.

President pro tempore of the Senate - Shane McMahon
A virtually powerless position that only gains influence in the Vice President's absence.

Secretary of State - Stone Cold Steve Austin
His job is meeting foreign leaders. If they agree, they share a beer. If not, stunner.

Secretary of the Treasury - Million Dollar Man Ted DiBiase
Who would you rather handle the nation's money?

Secretary of Defense - Sgt. Slaughter
No one would dare mess with us under his watch!

Attorney General - Triple H
A powerful post that demands both toughness and intelligence.

Secretary of the Interior - The Bushwackers
Imagine how nice our national parks would look with these two trimming the foliage.

Secretary of Agriculture - Hillbilly Jim
He knows how to work the land.

Secretary of Commerce - JBL
Dude is actually a financial contributor to Fox News. Seriously, Google it.

Secretary of Labor - Dusty Rhodes
Working class hero who's not afraid to roll up his sleeves and get the job done.

Secretary of Health and Human Services - Val Venis
Sorry, had to. His knowledge of the human body is unrivaled.

Secretary of Housing and Urban Development - Hacksaw Jim Dugan
He literally carried a wood plank around with him. Come on.

Secretary of Transportation - Diesel
Until we find an alternative fuel source, he's our man.

Secretary of Energy - The Ultimate Warrior
No man in WWE history has ever reached the Warrior's level of intensity.

Secretary of Education - Booker T
The real Booker T. Washington was one of the great American educators, founding his own University.

Chief of Staff - Hulk Hogan
The highest-ranking employee of the White House had to be a true legend. The obvious pun doesn't hurt either (see: Hogan's current sex-tape lawsuit).

White House Press Secretary - The Rock
The Rock: "What is your question?"
Reporter: "How come the president hasn't..."
The Rock: "IT DOESN'T MATTER WHAT YOUR QUESTION IS!"

Chair of the Federal Reserve - Goldust
Who better to be in charge of our nation's gold than a man literally covered in gold?

White House Security - Andre the Giant and Big Show
Fence-jumpers would think twice with these two behemoths standing on either side of the White House doors.

Director of Area 51 - Mankind
Picture the Area 51 guy from Independence Day, but much, much weirder.

Administrator of NASA - Luna Vachon
I mean, her name literally means "moon" in Latin, so...

Director of the FEMA - Earthquake and Typhoon
Nobody knows more about natural disasters than these two destructive forces of Mother Nature.

Director of White House Information Technology - Y2J
Because Y2K. Get it?

Chairman of the National Aeronautic Association - Jimmy "Superfly" Snuka
No one logged more frequent-flyer miles than this leaping legend of the ring.

CEO of the American Society for the Prevention of Cruelty to Animals - Jake "The Snake" Roberts
Anyone who loves their pet enough to bring them to work every day deserves this post.

Hairdresser to the President - Brutus "The Barber" Beefcake
If Trump wins, Brutus will need those legendary hedge clippers to get the job done.

Director of the National Institute of Corrections - The Big Boss Man
Don't mess with the law.

Head of the American Academy of Arts and Sciences - The Honky Tonk Man
Not sure about the science part, but he can play that funky music.

Surgeon General of the United States - The Undertaker
When you ignore the health warnings, you know who's coming for you.

Ambassador to Canada - The Mountie

Ambassador to England - The British Bulldog

Ambassador to the greater Middle East - The Iron Sheik

And finally, the Supreme Court, whose seats are reserved for legends of the industry who don't necessarily fit into a specific Cabinet position but whose wisdom and contribution to the sport have earned them a spot on this prestigious panel:

Chief Justice of the Supreme Court - Vince McMahon, Sr.
While the corporation was technically founded by Vince's grandfather, it was Vince's dad who brought it to the mainstream through the use of television.

Remaining Supreme Court Justices - Lou Al Bano, Ric Flair, Bret Hart, Jerry "The King" Lawler, Sean Michaels, The Fabulous Moolah, Bruno San Martino and George "The Animal" Steele.
So there it is folks. A glimpse of what our government would look like under a Trump-McMahon administration. Hope you enjoyed our list. Do you smell what we're cookin'? Or are we a bunch of jabronies? Let us know in the comments below!