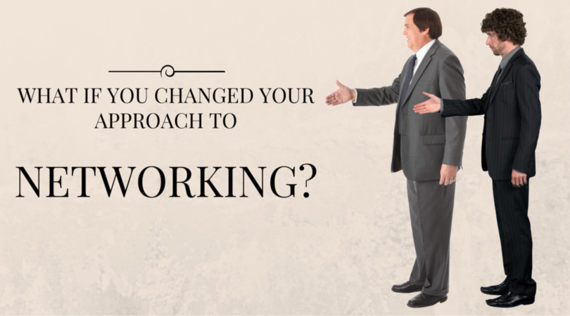 We hatched a plan. We'd meet in Sausalito, cruise over the Golden Gate Bridge and spend the day together. Awesome, a dad/daughter day with my middle one. She is a senior in college, and San Francisco is the halfway point between home and school. One-on-one time is a rare luxury. My son was taking his college boards, my oldest lives out of state, and my wife was out of town. It was an opportunity that I had to seize. Though, in one respect, it saddens me that our kids are now all young adults, I do love the experience of having grown up conversations. It's just cool to talk and see the wisdom taking root in each of them.

One-on-one time is a rare luxury.

During our conversation, my daughter mentioned that she wanted to explore other jobs for the summer and next semester. She was concerned, because "I may be an outgoing person, but I suck at networking." I knew exactly what she meant. I struggled with networking for a long, long time. In fact, I continued to "suck" at networking well into my 40's. For most of my career, my personal strategy was to avoid it as much as possible. I was fortunate to have people on my team who enjoyed and were good at it. But, when I started my own practice it was up to me, and I was terrified.

"I may be an outgoing person, but I suck at networking."

I vividly remember that first attempt. I loaded up my wallet, and my shirt pocket with newly minted business cards, and headed out to an association meeting I had been told was a "target-rich environment". I milled about for an hour or more. My grand total of conversations was two, and both were worthless. I felt awkward, disingenuous, and just completely out of my element.

My grand total of conversations was two, and both were worthless.

What the hell was I going to do? How was I going to grow my business? You have to press the flesh to get the word out. I spent a lot of time thinking about what it was that I found so uncomfortable about networking. Yes, I am somewhat introverted, but falling back on that would just be a convenient excuse as I am able to overcome that in many other situations. It finally hit me. What I hated about networking was approaching every interaction from a position of "want". I felt like a charlatan.

I spent a lot of time thinking about what it was that I found so uncomfortable about networking.

I thought, what if I changed my approach to networking, and took "want" out of the equation? I know, it sounds like a bunch of fluff, but it is not. It works, it's honest, and if you struggle with networking, in my opinion, it is the way to go. Let me try to explain it in more detail.

What if I changed my approach to networking, and took "want" out of the equation?

In a recent Q&A session with our book club, David Burkus, author, and professor said something that just struck me as fundamental to this approach. He said, "Trust is reciprocal. In order to get it, you have to first give it." That is now how I network. When I meet people, I focus on how I can help them. It's not that I am so altruistic, doing so just feels good. I am being genuine, and I enjoy making a difference. I am also giving trust. Not with the expectation of something in return, but in the belief that it will be met with reciprocity at some point in the future. I trust that presented with an opportunity to help me, they will. It is that simple. Not only do I now find myself actually enjoying networking, it has also been the source of some great new friendships. Plus, it's been pretty good for business. Maybe you should consider changing your approach to networking. Who knows, you might make a few friends and grow your business along the way

When I meet people, I focus on how I can help them. It's not that I am so altruistic, doing so just feels good. I am being genuine, and I enjoy making a difference.

Interested in reading & talking about leadership?
Join the Integrative Leader's Book Club. Each month we pick a thought provoking book to read and discuss. In June, we will be reading Daniel Pink's "Drive, The Surprising Truth About What Motivates Us."

Elliot Begoun is the Principal of The Intertwine Group. His articles appear in publications such as the Huffington Post, SmartBrief and Linked2Leadership. He serves as a thinking partner, providing clients with the clarity, focus, and tools needed to make good people and product decisions. He helps clients build lasting relationships with their customers, develop leaders who make others feel heard, cared for, valued and respected, and most importantly to grow.

Other ways to connect: