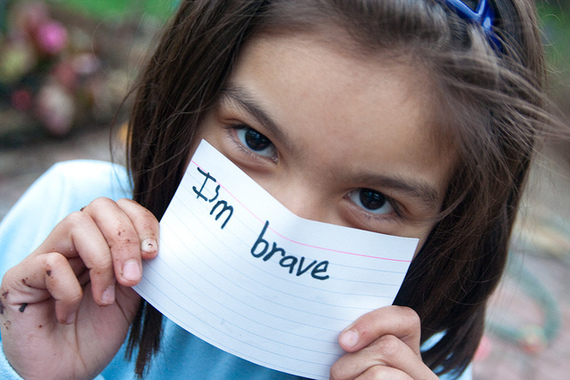 "You're doing what I wish I had the courage to do."

Three years later, and those words from an old co-worker haven't left me.

A week before she uttered them, I had resigned from my six-figure job at a well respected healthcare company. Word had spread that I was leaving to follow my dream of building my own business.

Through all the congratulations and well wishes, her words are the ones I've thought of most. I didn't consider myself, or what I was doing courageous. I was only doing what my soul longed to do.

And based upon her comment, hers longed to do the same.

Ever since then, I've thought a lot about bravery, and what really causes people to leave their comfort zone, in spite of all the risks.

It's not that some people are born with a stronger dose of courage than others. Being brave, is simply about recognizing that you have the power to take action on something. And then of course, following that realization with the appropriate behavior.

Being courageous doesn't require you to go out and bungee jump, or be like the heroes you see on the news that risk their lives to save others.

You just need to act on what's in your heart to do. Without caring about what others will think. Or fretting endlessly about the possibility of failure.

Ordinary people do brave things every day. You can too. And when you do, you can expect one or more of the following results:

1. You could make life better for others
Sheryl Broverman had no intention of starting a girls school, let alone one on another continent. But when she heard the story of a young woman who ran away because she wanted to go to school, rather than go through with a forced arranged marriage, she decided to do something. Here's how she describes what happened:

"This went from we can help one girl, to why don't we help more girls. We can work to change the system. And in a crazy moment I decided to try and start an NGO and a school, and worked with people in Kenya and in the U.S. And it's the most gratifying and terrifying thing I've ever done."

If you are brave, you could change an unjust system. You could help a girl go to school. You could educate others on important issues. Your actions could change the course of someone else's life for the better.

2. You could live your dream
Heather Greewood Davis was a freelance travel writer living with her husband and two kids in Toronto. And even though their life seemed typical for a family of four, Heather and her husband often wondered if there was more. She speaks of how they decided to make a change:

"We dreamed of seeing the world with our kids. We imagined having more time to do nothing (and everything) together. We hoped that one day we'd make it happen. And then one day we decided to do it."

A little while later, the family of four took a 12-month long around-the-world trip that spanned six continents, and twenty-nine countries.

To make their dream their reality, the family made a plan in advance. They saved vigorously. Heather's husband made arrangements to take a year-long sabbatical from his job, and the kids missed a year of school.

If you are brave, your dream could be your reality. You could quit a job you hate. You could get paid to do work you love. You could visit that place you've always wanted to go. Your actions could change the course of your life for the better.

3. You could start a movement

He let his body be free enough to respond in the way the music moved him. Soon enough, he inspired a mob of people to start dancing. He started a movement.

That's how movements often begin. Not always with a grand plan for how to make "it" happen. Just with one person shining their light so bright, that it gives others the spark they need to do the same.

If you are brave, you could inspire others. You could cause a chain reaction of random acts of kindness. You could provide the encouragement others need to do what's in their hearts to do. Your actions could bring joy to you and those all around you.

You already have the courage you need
In the classic The Wizard of Oz, the Cowardly Lion searched long and hard for the courage he later realized he'd had all along.

And just like the Cowardly Lion, and my former co-worker, you have all the courage you need right now. You only have to activate it. You already are brave.

Take action on what your soul wants you to do. Someone is waiting for you to stand up and be brave. And that someone, just may be you.