It's Father's Day, a day which should be filled with summertime family fun - not stories about child marriage. In the United States, it's hard for us to imagine something as shocking as children marrying at an age when they should be attending second grade, but it happens in many countries.

In some cultures, child marriage is an accepted (although usually illegal) social norm, which dictates that children are married off to other families in exchange for a dowry that includes furniture or livestock. Globally, more than 15 million girls are married before the age of 18, some as young as 7 or 8 years old. Pregnancy and childbirth are are among the leading causes of death for girls ages 15-19 in low-income countries, and girls who are married early have few prospects for education, economic empowerment or viable employment. Organizations and campaigns such as The Elders, Save the Children, World Vision and Girls Not Brides are working to prioritize girls' education and reduce instances of child brides.

Yet, in a landscape filled with NGOs dedicated to helping young women, the spotlight has rarely been shone upon child grooms - boys forced into marriage at an early age.

In her Daily Beast article, "The Sad Hidden Plight of Child Grooms," journalist Nina Strochlic urged research and reporting about these boys last year. This week, the poverty-fighting organization, CARE, has released a report detailing the child marriage problem in Nepal, where the devastating recent earthquakes threatened to move the statistics in the wrong direction.

Titled "Dads Too Soon: The Child Grooms of Nepal," the multimedia report details the forces pushing boys into early marriages in the farming villages of western Nepal, where the rates of child marriage are some of the highest in the world: 41 percent for girls and 11 percent for boys.

In the report, the stories of several former child grooms -- now in their 20s and 30s -- reflect upon the emotional, physical and economic toll the practice has taken on their lives. While Pannibal Yadav and Mathura Dhobi were dropping out of school to perform odd jobs and help support both their parents and their own children, some of their acquaintances were finishing school, attending university and earning a wage. Today, they are husbands and fathers who want their own children to have the opportunity to complete an education and marry as adults to whomever they choose.

"Nepalese law prohibits marriage before age 18, but the practice remains common in the poor, predominantly Hindu communities along the border with northern India," reported the Los Angeles Times in January.

After the April 25 earthquake of 7.8 magnitude, up to one million children across the country have dealt with hunger and an inability to attend school due to lack of facilities, making them more vulnerable to the practice of child marriage.

The marriages are primarily the result of peer pressure among parents of children deemed of marrying age in Nepalese culture, says CARE's Kumari Shah.

"We hear over and over again from parents that people in the community start whispering and wondering what's wrong with a child if he or she isn't married early," Shah says. "The pressure is hardest to take for poor families who can least afford to take risks. Wait too long, they fear, and their child will be stigmatized and unable to marry."

The good news is that community programs such as CARE's Tipping Point are engaging child grooms as key allies in the movement to strike at the roots of child marriage in Nepal.

Hug your father today, and click here to hear the stories about the dads who were married too young and what they are doing to create positive change in their communities. 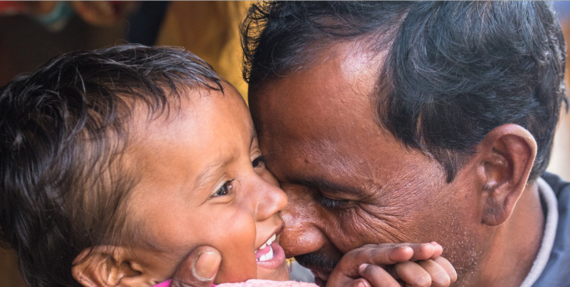