We humans fascinate me. We make extensive efforts to ride the waves of every trend, ensuring every article of clothing we select is acceptable and "in." We desire to stand out from our competitors and make a statement for ourselves, yet remain acceptable enough to "blend." We want to be unique "enough" to be special, but not to a degree that we are deemed a "freak." We want to make an "entrance," but not stray so far from the norm that anyone would dare ever consider showing us the door.

We are like actors on a stage and, oftentimes, only the refined and concocted versions of ourselves are ever allowed to be showcased. I just want to know why.

We often exist on a treadmill going nowhere while remaining breathless and desperate to keep up with everything we admire and aspire to be. We blink back tears, fake smiles, serve up our best angles for our selfies and layer our faces with makeup in efforts to hide the shame of the reality of what we are. We spend so much time and put so much effort into being an acceptable and comparable yet slightly better version than the next person, we then forget to just be uniquely ourselves. But, if you spend your life merely modeling after others, you cheat yourself and everyone else out of the pleasure of experiencing you.

Where Did We Ever Get The Notion That Just 'Being Ourselves' Is Not Enough? 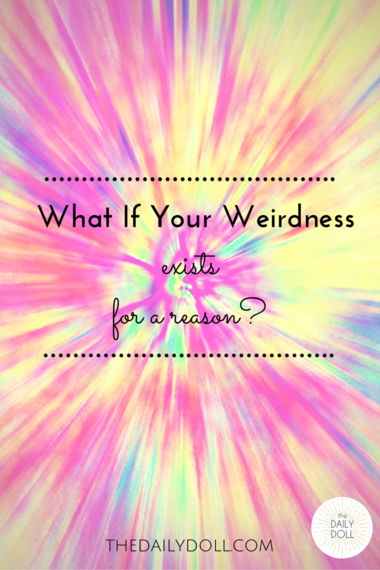 How many times, especially while growing up, were you given the advice, "Just be yourself..."? Authority figures of every kind preach this message to the generations which follow them. If it were such simple advice to heed, however, it wouldn't be shoved down our throats and in our faces throughout the duration of our growing up. If the majority of individuals sincerely felt they were entirely adequate simply being who they are, nothing more and nothing less, there wouldn't be labels such as "name dropper," "wannabe," "opportunist" and "fame whore." Also, there would be no reason to lie or manipulate. The truth would be easy because it would always feel safe. There would be nothing to fight against and no reason to retreat in shame to any emotional cave.

I spent much of my childhood feeling terrified of my own imperfection. I think most people struggle with this, but obviously to varying degrees. But, what if your weirdness, the part of you which brings you the most shame or fear at the notion of being revealed, is actually a gift? 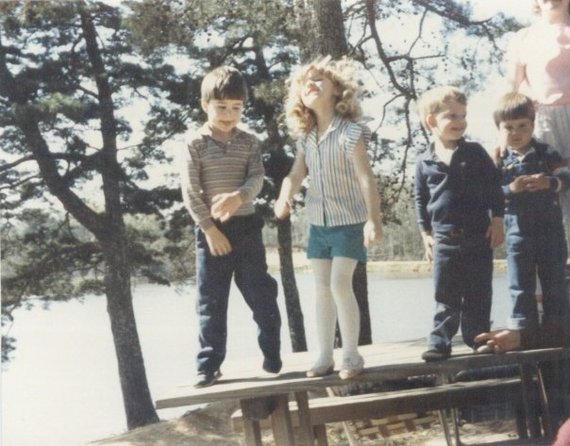 What If Your Weirdness Is Also Your Fierceness?

Recently, Sam Smith delivered a powerful message in his acceptance speech at the Grammy Awards when he said, "It was only until I started to be myself that the music started to flow and people started to listen." So few ever grasp this concept. Many simply continue to applaud others for their bravery and authenticity, yet press forward in their fight of the reality of who they are, never allowing their story to be given a mere breath.

What if the specific aspects of your personality or history which bring you the most discomfort are what will make you the most successful? What if your inner oddball comes bearing the most fruit? What if your inner oddball is also your inner champion? In fact, what if it is a freaking boss? If you just do things the way everyone else always has, how boring and uneventful is that? How would records ever be broken? How would there ever be progressions or revolutions?

My husband didn't know how to receive me initially. He later told me that he had never met anyone so animated and energetic, for I was somewhat like a cartoon character in the flesh. But, you know what? Those aspects of my personality are what he has come to love and cherish the most. I've also been known to jump up and down like a 5 year-old out of excitement from being gifted with a strawberry lemonade cupcake. I refuse to throw a veil over my spirit. 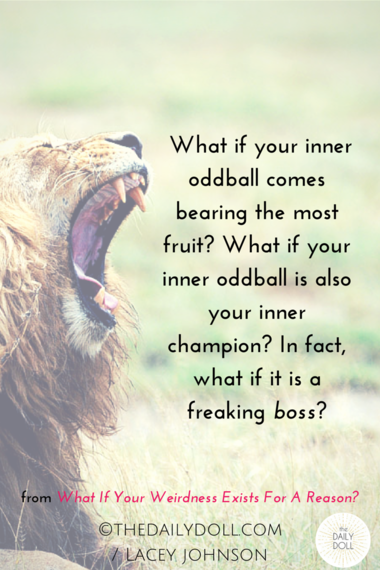 Perhaps you have felt that you could paint a picture far more impressive than the reality of you. Allow me to assure you that such a belief is not true. You cannot force a shoe onto a foot it wasn't made for. Eventually, you're going to start walking funny. You'll also become a miserable, blistering mess.

Once upon a time, I longed for a "cookie cutter" life with a "cookie cutter" brain that never felt so compelled to stray from the norm and challenge everything. But, that's not who I am. Had I continued to try and force myself to be such, my entire life would have become a lie.

When I am gone, my inner oddball is what my family will smile inside to recall. If I were to die tomorrow, my husband would likely most miss my transparent facial expressions, the way my cooking ventures always leave the kitchen appearing as though an atomic bomb exploded, the way I alter the pronunciation of everyone's name once I develop a deep fondness for them, and perhaps even the way I inevitably spill my wine each time it's contained in an expensive glass. My parents would celebrate the way my every attempt at a graceful entrance always results in at least one awkward stumble. My mom would likely laugh to recall the memory of my face swelling to twice its size when I had my wisdom teeth removed, for I resembled something in the realm of a chipmunk on steroids. She was provoked to pleading with the surgeon's nurse for an early check-up, saying, "I mean, just trust me. It's big."

If Your Weirdness Persists, It Exists For A Reason

I always wanted to possess the swan-like gracefulness and effortless subservience of a lady, but instead possess a dramatic blend of boldness and quirkiness more comparable to that of Lucille Ball. Regardless, I now celebrate my proverbial weirdness and believe it was divinely placed. I challenge you to do the same. I am uninterested in being confined to the walls of normalcy. I'd rather unlock to doors to the darkest dungeons confined in the hearts of others.

Perhaps there is something you love more than anything in the world that someone has told you is silly or unacceptable. Perhaps there are odd quirks existing within you that you struggle to throw the heaviest blankets over is desperation to cover. But what if those specific qualities exist within you to bring joy to someone else? So what if it isn't "proper," mainstream or has never been done before. Oftentimes those with the most daggers in their backs, those with the echoes of the loudest screams containing labels such as "weirdo" and "freak" are the ones about to make history. Their weirdness exists for a reason. So does yours.

Read the original and extended version of this article by Lacey Johnson on The Daily Doll.