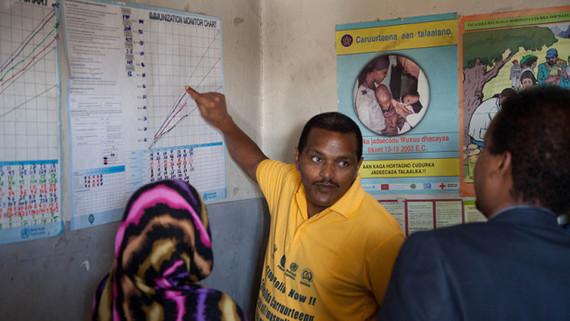 This article originally ran at Devex.com on August 1, 2016.

It is time for the world to raise the bar for reporting immunization data.

A few weeks ago the World Health Organization and UNICEF released their annual report on childhood immunization that serves as a "checkup" on how much progress we're making. This year's report gave us much to celebrate: We are reaching more children with lifesaving vaccines than ever.

And yet, we're not satisfied with the report and its outcomes. Why not? The report provides a useful summary of coverage at a national level, but it lacks the resolution that is needed to really understand our progress and the challenges we face in immunizing the world's children. What we need is data on immunization coverage in each district, not just a national average.

In 2016, it is not too much to ask to for local data to be made available—and it would be many times more valuable in informing the actions required to reach more children with vaccines. If you don't think it's possible, just consider this: New York City has used a data base and maps with every single planted tree in Manhattan—showing where it's located and when it was planted—to modify its schedule for pruning the trees. This data has helped show the "city that never sleeps" how to reduce by 22 percent the number of power outages that occur from branches falling on power lines.

Contrast this with this year's report from WHO and UNICEF on vaccine coverage. The latest data show that in 2015, a record-breaking 86 percent of the world's children received the required doses for diphtheria-tetanus-pertussis—the vaccine used to measure basic vaccine reach. What's more, the number of countries that have achieved and sustained the 90 percent immunization target established for DTP3 has doubled from 63 in 2000 to 126 in 2015—truly remarkable progress. Good news, to be sure. But when summarized at the planetary level, this information is not entirely helpful for understanding where we're doing better and where we need to improve.

The report does demonstrate that some countries are still missing key targets. Sixty-eight countries are still falling short of the Global Vaccine Action Plan's 90 percent target—with some fragile states only reaching 15 percent coverage. But what does a coverage rate of, say, 51 percent actually mean? Are the remaining 49 percent spread evenly across the country, or are there pockets of very high and very low coverage? If so, what do those variations teach us about the factors that lead to success in some places and failures in others?

While these findings are encouraging at a macro level, they highlight the critical need to examine coverage data at the district level in order to identify where kids are missed and where they are served well. It is simply impossible to get an accurate picture of immunization coverage in a single national figure, as disparities between states, districts or communities are completely eclipsed in these aggregated data points.

How can immunization program managers identify and correct pockets where coverage is low when only one number is reported for an entire country? They simply can't—at least not beyond making an educated guess.

It is time to hold ourselves to a higher standard as a global immunization community and aim for annual reporting of district-level immunization data to portray a more accurate picture of what is working and where challenges remain. This will allow policymakers and immunization program managers alike to direct resources at children who are being missed.

For most countries, improvements to immunization data can be made now simply by improving collection and analysis efforts.

To track malaria, for example, scientists generate heat maps from 25 square kilometers of data to show how malaria affects different parts of a single country in very different ways. The travel app Waze uses live data to help us avoid traffic jams, and the Find my Friends app helps us to discover if someone we know is dining at a nearby table. Doesn't it make sense to expect the same level of resolution from the data we use to deliver lifesaving vaccines?

Better data collection will help but even today every country in the world with only a single, national coverage estimate in the latest WHO and UNICEF report has built that estimate on data collected at a district-level. This data—like the data on the trees of New York City—exists.

The essential next step is to shift the accepted standard for global reporting of immunization coverage from national to subnational, and make this data transparent for all to see. Though some countries may be reluctant, this is exactly what's needed to address immunization gaps, promote transparency and ensure estimates are accurate. WHO and UNICEF can lead the way by requiring this from 2017 onwards, and actively supporting countries to make the data available.