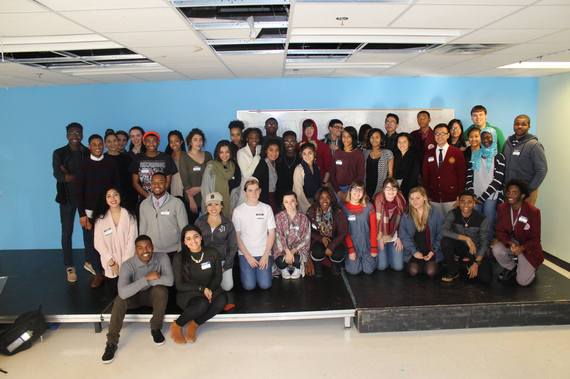 Thursday Student Voice convened a group of students from around the city of Philadelphia in a Student Voice Convention to launch a national tour. We didn't choose the city by accident--Philadelphia was the birthplace of our nation. It was here, 227 years ago that another convention created an American government for the people and by the people and it is here in 2016 that students discussed how to make an education system for the students and by the students.

We began the day with Philadelphia's superintendent, Dr. William Hite. He spoke about the importance of having your voice heard, especially in the conversations about the current problems facing the city.

The problems are many. The city is facing massive budget cuts that are threatening to shut schools down; students are acutely aware and ready to fight for their schools. And many of those schools are decrepit and falling apart. We heard from Philadelphia Councilwoman Helen Gym about an exploding school boiler which lit an employee on fire.

In conversation with students, we heard about a "game" played in an African-American History class:

Philadelphia's school system may need many improvements, but one thing was made absolutely clear: the students have a passion and dedication to their schools and communities that is inspiring. It didn't take long for students to determine that there was something more than a little bit wrong with "slave-tag," and they spoke out.

In Philadelphia high schools, protests are a common occurrence. Students from all walks of life are aware of how policies at the state and district level affect their ability to learn.

Today, we helped raise the consciousness of Philadelphia teenagers from over a half dozen schools about the role they can play in improving education. This weekend we head to Iowa where presidential candidates are gearing up to make the case as to why their vision for America is the right one. Let's see how many of them talk about education.

Be on the look-out for more stories from Philadelphia students as part of our Students of America campaign on Facebook, Twitter, and Instagram. And follow us on Snapchat and Periscope, @Stuvoice, to get a look at each stop.

The movement is live. #StuVoice