Nine years ago, Traci Szymanski participated in a Birthright Israel (Taglit) trip that would forever change her perspective on the Jewish state. "I grew up always saying I was half and half, or nothing," she told Tazpit News Agency. "My mom is Jewish and my dad is Catholic, and until I visited Israel with Taglit, I was never exactly certain how to describe my identity."

Her first trip to Israel on the 10-day Birthright program as a 26-year-old changed all that, sparking an interest and forging a connection with a country that made her feel that she was part of a "greater community."

"Thanks to that trip, I realized how central Israel is to my sense of identity and it made me reconnect to Judaism."

So much so that Szymanski, who is an executive in the entertainment industry based out of Los Angeles, has been working since then to change the way young people perceive Israel. Her work in the entertainment industry in LA has allowed her to promote Israel through pop culture in a variety of projects ranging from indie and documentary films to organizing celebrity trips to the country. Working with the likes of Madonna and Demi Moore, Szymanski realized that drawing celebrities to Israel would help change the mainstream perspective of the country. 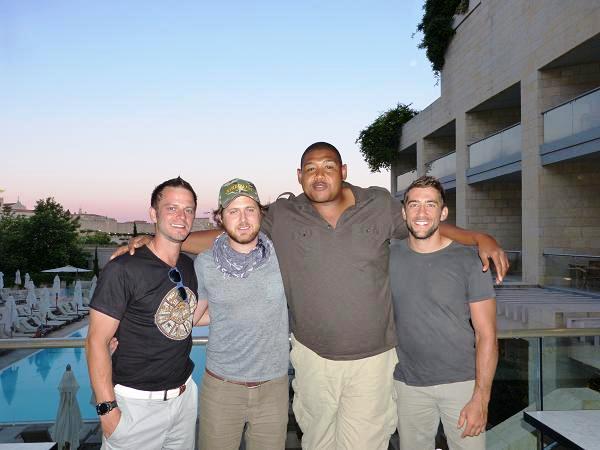 "Every meeting, every encounter is an opportunity to change someone's conception about Israel and the Jewish people. If we work to change the misconceptions about Israel, it will help decrease the prejudice and hate that often misconstrues the reality here," said Szymanski.

Szymanski's latest project has been to bring a group of stars to Israel, who she describes as friends, from the cast of CSI. Cast members included Carmine Giovinazzo and AJ Buckley from CSI: NY, and Omar Benson Miller and Jonathan Togo from CSI: Miami.

"I've always wanted to visit Israel. As an American Jew in Hebrew School, culturally you feel that Israel is your homeland even if you don't necessarily celebrate the holidays," Togo explained.

Togo, who stars as Ryan Wolfe on CSI Miami said he was particularly struck by how modernity and ancient history co-exist in the country. "On one hand, the world's religions began here and there are thousands of years worth of history, but yet the country is socially so modern, a bastion of liberal free-thought and technology in a region surrounded by fundamentalist cultures and dictators."

"Growing up in Massachusetts, with Plymouth Rock and the Puritan history surrounding me, I can most definitely appreciate the ancient history of Israel," explains Togo.

"For me, coming here brings everything full circle. I went to a lot more confirmations than bar mitzvahs during my childhood in the Irish-Catholic area of Boston. To be in a place where almost everyone is Jewish is mind-blowing to me," finishes Togo. "It just makes me appreciate my Jewish identity even more."

This is exactly the kind of reaction Szymanski can appreciate. "I want to make a strong impact on the way young people view Israel from all cultures and faiths," explains Szymanski.

AJ Buckley, star of CSI: New York, explained that the trip to Israel reaffirmed his appreciation of the traditional aspects of Judeo-Christian values. Originally from Ireland and from a tight-knit Irish Catholic family, Buckley explains that what struck him most about Israelis was the "strong sense of family ties."

"I grew up in a home where we would tell stories around the dinner table all the time," said Buckley. "It's where my identity developed, just listening to my mom and dad talk."

"In Israel, I discovered that kind of life here as well, where Israelis are very centered around family, something I think that has been lost in America," said Buckley. "It's amazing to see how much Judaic and Christian values are similar when it comes to family being the center of life -- you really feel that here."

"There is this national, collective story that parents pass to their children which really gives people their sense of identity here," concluded Buckley.

Buckley's CSI co-star, Omar Benson Miller, who has done extensive traveling around the world, stated that "Israel is a real jewel. I felt so accepted and I'd love to bring my mom here someday," he said.

For Szymanski, who partnered both with Noa Tishbi, an Israeli producer and actress ("The Ghost of Girlfriends Past"), and Israel's Ministry of Tourism which sponsored the trip to bring the stars, the idea of Birthright style trips for celebrities is her way of thanking the Taglit program.

"Birthright Israel gave me so much, and this is my way of giving back," said Szymanski.