The 2012 Iowa caucus is the leadoff vote of the election season and starts the long march to Nov. 6; however, many don't know what the contest entails.

The Iowa caucus (also referred to as "caucuses" because events are held statewide) may be considered more community-oriented than other candidate selection competitions. While the process doesn't exactly work the same way in every state that holds a caucus, Iowa sets a pretty good example of what to expect.

The definition of the word caucus leaves a lot open to interpretation:

A meeting of the members of a legislative body who are members of a particular political party, to select candidates or decide policy.

But when Iowans from each of the state's 1,774 precincts leave their homes to participate in the partisan selection process at 7 p.m. CST (8 p.m. EST), they are heading toward a communal political experience. As Fox News explains, they don't just show up and vote. The process allows for community discussion about the candidates and the issues before a vote is put in front of the precinct.

According to the Daily News, many precincts meet in the same places, and this year that means there will be about 800 caucus locations.

When Republican representatives, friends, neighbors, and family members convene in Iowa gymnasiums, church basements, and high schools tonight they will also see something else: representatives for candidates. The caucus process allows candidate representatives to attempt to persuade undecided caucus-goers at the last minute, in many cases even delivering impassioned speeches before the group comes together for a vote. The same typically isn't true for primaries.

Each precinct will then select a candidate they wish to have represented on the county level. The process for doing so differs between the the Republican and Democratic parties, according to Mediaite. The GOP uses single-selection secret ballots to select a candidate in each precinct (which will happen tonight), after representatives first attempt to talk undecided voters into choosing their candidates.

After tonight's activities come to an end, the process is not over. This Nation explains that tonight's events merely select representatives from each precinct to send to county conventions in March:

In essence, Iowa doesn't choose a preferred candidate until June, though in the wake of the Jan. 3 caucuses political analysts will have a pretty good idea of who will take the state, for the Republican party at least.

According to the Daily News, the Iowa caucus is written into both parties' rules to be the first event of the presidential political season, but it's a statement not enforceable by law. Before 1972, the caucus in Iowa wasn't held in the same regard as the primaries, New Hampshire's being the first.

In September, Florida moved its primary to Jan. 31, before New Hampshire's, in an attempt to gain importance. The move stirred much controversy and prompted New Hampshire to leapfrog on the primary calendar as well. 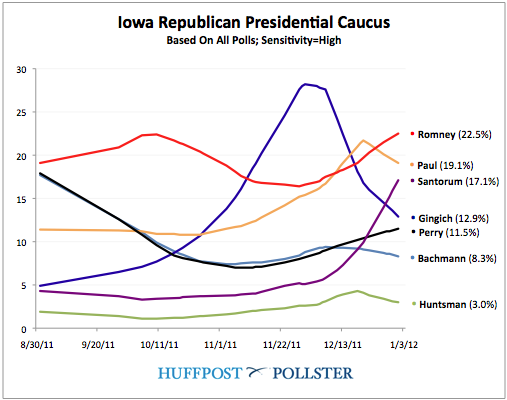