I'd never heard of a concretion until a few years ago. Here's the dictionary definition of concretion:

noun: concretion; plural noun: concretions
a hard solid mass formed by the local accumulation of matter, especially within the body or within a mass of sediment.
a mass of small concretions, each built up layer upon layer around some small nucleus"

From this definition a concretion does not seem very appealing or interesting. Here, however, is one photo of the Fontainebleau Concretions in Richard Berger's Masterpieces of the Earth Collection. 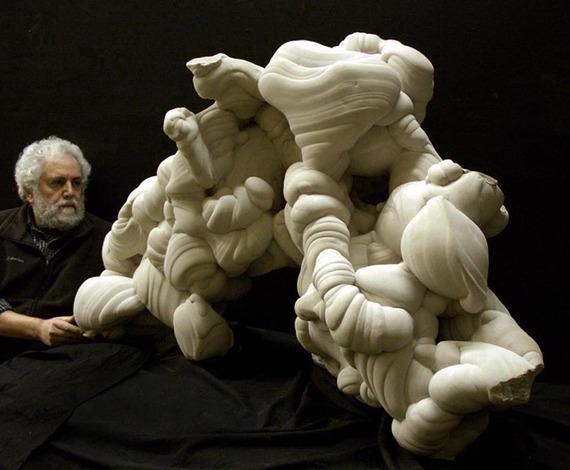 More of his Fontainebleau Concretions can be seen on his website www.MasterpiecesOfTheEarth.com and they certainly are much more that "a hard solid mass ..."

Berger has dozen of these concretions in the Masterpieces of the Earth Collection, and they're amazing sculptural pieces that go beyond what most people believe possible. Were you to encounter on of these unique pieces in an art museum, you'd assume it was the product of a great sculptor. The Fontainebleau Concretions were, however, sculpted as the result of a natural event millions of years ago in what is now France.

When they were initially discovered in 1988, Richard Berger was one of the first people on the scene, and he purchased everything that emerged from that mining site through 1991. Thus, his Masterpieces of the Earth Collection contains almost all of these unique natural sculptures.

Viewing most of them in a single room, as they are now displayed, left me feeling more than a bit overwhelmed by the distinctive beauty each intricate piece radiates. Hopefully, in the not too distant future, Berger's vision of a Museum of the Earth will come to fruition, and all people can experience the majesty of the Fontainebleau Collection for themselves.