When first told around the fire, fairy tales like "Cinderella" were entertainment for everyone, and only in the past few centuries have they become the province of children. Something of the sort may be happening to the epic and romance today. From the Epic of Gilgamesh and Homer to Popol Vuh and the Arthurian romances, the epic is essentially a story on a monumental scale. It is about great themes, larger-than-life characters, amazing feats, and enthralling adventures in which the fates of entire peoples are at stake. Such tales risk coming across as unsophisticated or pretentious in the most serious forms of adult literature today, but you find them in the Harry Potter books and, more recently, in Suzanne Collins' trilogy The Hunger Games. Perhaps the reason why the epic survives largely in literature for young people is that their reality often seems so boundless in both threat and promise.

Grand narratives generate similarly transcendent images. As men and women ceased to believe in them during the early modern period, fantastic creatures such as the unicorn and eventually even the dragon became symbols of freedom and transcendence. They were, in a sense, also symbols of revolt, but more spiritual than political. This was the rebellion against pretensions to comprehend and dominate the natural world, as well as to control one's fellow human beings. Simply by existing, even in the imagination, those creatures showed that those in authority were wrong. In the world of the The Hunger Games, the popular trilogy of novels for young people by Suzanne Collins, the "mockingjay" is such a symbol.

Thirteen districts, in what was once the United States, are oppressed by an evil Capitol, which asserts its power by demanding yearly tributes of young men and women for the Hunger Games, gladiatorial contests in which many people are placed in a controlled environment and only one is meant to survive. The Capitol also created jabberjays, birds that would spy on citizens and repeat their conversations, but rebels divined the purpose of the birds and told them lies. The Capitol decided the birds were useless and abandoned them to perish. The jabberjays, showing an unanticipated will to endure, mated with mockingbirds, to create mockingjays. These new birds lacked the ability to remember words, but recalled tunes instead, and then changed them to create new melodies. They would fall silent in the presence of a beautiful human song.

The heroine is a teenage girl named Katniss, who volunteers to take the place of her sister and be a tribute at the Hunger Games. She wears a pin on her lapel with a mockingjay, which becomes a sign of political and military resistance. In the ceremonies leading up to the games, she is dressed by her handlers first in a garment that appears to be of fire, and later as a mockingjay. But, assuming a role as a symbol of revolution, Katniss cannot be herself. Soon, she can no longer tell her own passions from the expectations of others. As she struggles to save the world, Katniss remains in many ways a typical teenager, who must find her own way amid the pressures from the adult world and her peers. While surviving ghastly trials and tribulations, she also worries about clothes, chooses between boyfriends, and learns who her real friends are.

The mockingjay is a variant of the phoenix, a mythological bird that goes back at least to ancient Egypt, and was said to regenerate by burning itself on a pyre. The phoenix has many variants such as the Egyptian bennu, the Russian firebird, the Chinese feng-huang, and the Japanese hoo-hoo. These mythic avians are generally -- though not always -- feminine, associated with the sun, and have long feathers that flow like tongues of flame. Some have beautiful songs that may be echoed by other birds.

The pin that Katniss wears to the Hunger Games is made of gold, and the mockingjay is surrounded by a circle. The crest resembles that of a blue jay, while the long tail is a bit like that of a mocking bird, but both features are characteristic of the phoenix and her folkloric relatives. This image appears as a logo on the covers of the trilogy, and is clearly a phoenix in the sun.

For all the author's artistry, the contrast between Katniss' epic battles and the relatively mundane problems of growing up can occasionally seem a bit humorous. She can indeed become a mockingjay, a phoenix, but not at will or all the time. But, for her at least, maturity resides precisely in that lesson. She is at her best when she forgets the scripts prepared by others and simply does what she feels to be right. Perhaps, in the end, the role of mockingjay is really the epic dimension of normal life. 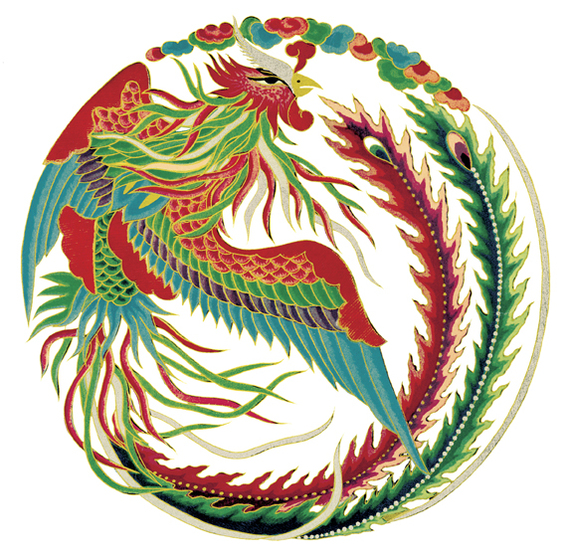