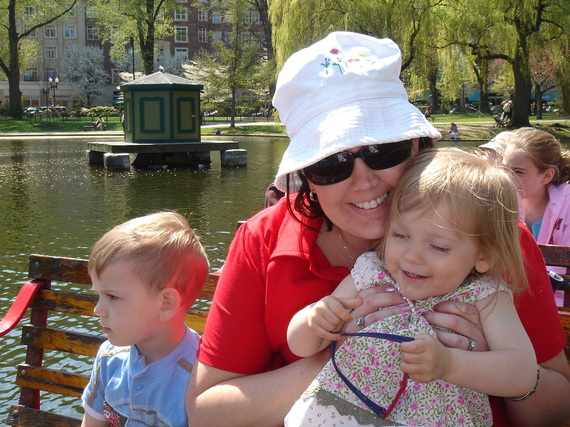 Recently I had dinner with a good friend. During our conversation, I referred to myself as a "single mother".

"Are you a single mother anymore?" My friend asked.
"Honestly, I don't know." Was my reply.

We were referring to the fact that I live with my boyfriend of four years and the fact that he contributes to our household finances. But, is that all "single parenting" is about? Money? He has no kids of his own. I am responsible for all of my kids needs. I have the benefit of being able to run an errand after dinner while he is home with them. He has helped me on occasion with getting my son to an early morning band rehearsal. Once he picked up my kids when I was stuck in traffic. Our financial situation has improved. So, am I not a "single mother"? What does that even mean?

Shortly after my divorce I was venting with a friend and she said something profound on the matter: "we are all single mothers in our own way".
She is married and has a son. I was not offended at all, as you might expect a newly minted divorcee to be. She was right. And this does not just apply to mothers. There are all sorts of single parents out there. To name just a few:

The married mother who has a husband that does not participate in any hands-on parenting. The single dad who lives with his parents and they are actively involved grandparents The mother who is stateside raising her children while her husband is deployed. The father doing the same while his wife is deployed. The father who stays home so his wife can fulfill her career dreams. The mom with a husband who works long hours and travels for work. The dad who shares custody of his kids. The grandparents, aunts and uncles who are raising children because their parents are battling addiction and are in jail, rehab or dead. The mom who is divorced with primary custody and balancing both school and work. The teen mom The widowed. The homeless. The single mom with no child support, raising kids emotionally, financially and spiritually because their spouse abandoned the family.

There are all kinds of single parents with varying levels of support, be it financial, emotional or hands-on help. There is no reason to resent the parents who are married. Maybe it is a terrible marriage. Maybe someone looks like they have it all but what they really have is a mountain of debt. Maybe a parent is financially poor but wealthy in faith. Another might be just the opposite. I used to cry when my neighbors had a big family barbecue and I was home alone with my kids until a friend pointed out that I actually had no idea what was going on at my neighbors' houses.

The important thing for all parents to remember is that there are all kinds of healthy support systems available. You just have to keep looking. Don't be afraid to ask for help, the worst that can happen is you don't get the help, but you are no worse off. If you live in an isolated area, there are on-line parenting groups to join. If you are struggling financially there might be government supports or other programs for parents. If you are struggling spiritually there are all sorts of religious groups and organizations to seek out. As they say, it truly does take a village.

Regardless of marital status, at the end of the day, the only thing your children really need to know is that you love them no matter what. So surround yourself with the best village you can find, count your blessings and just breathe. Single parent or not.

More:
divorcesingle parentingParenting Family
Newsletter Sign Up
The Morning Email
Wake up to the day's most important news.
Successfully Subscribed!
Realness delivered to your inbox