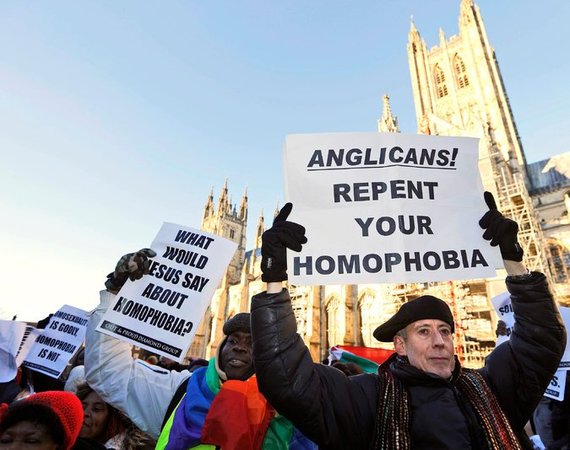 About a year ago, I began a new ministry in a nearby neighborhood (Pop Up Theology, check it out here, or on facebook). Not wanting to muscle in on anyone else's turf and hoping to perhaps network with others in the area, I researched what else was going on around me. I was momentarily excited to see that there was a church plant very nearby offering "Anglican" worship that was "both ancient and contemporary" (Hey, I'm Anglican! And I'm all about ancient and contemporary worship!), and being run by two Fuller Seminary grads (Hey, I went there!) to boot. It didn't take long for my excitement to fade, however. See, I momentarily forgot that when Americans talk about being "Anglican," it's usually a code word for something else. They're not referring to the worldwide Anglican Communion, which the Episcopal Church is still a part of, recent, petty, wrist-slapping notwithstanding, but to the Anglican Church in North America (ACNA), a group that broke off in 2009 to start their own denomination and who, guess what? Are NOT part of the Anglican Communion, regardless of what their name says. About that same time, I also read about another Fuller grad doing an "Anglican" church plant in Texas and discovered the ACNA has a whole diocese dedicated to starting new churches across the country. These shiny-faced young pastors with their slick websites and promising-sounding new ministries might have some "ancient worship" going on, but one thing that is definitely ancient is their theology.

The ACNA website lists seven points in their theological statement, none of which grapple with anything resembling practical theology, but simply list historic statements and councils of the church-and I do mean historic, as in the 1571 Thirty-Nine Articles of Religion and the 1662 prayer book. What kind of theology for a church founded in the 21st Century ignores the past 500 years and doesn't mention one word about social justice or outreach to the poor or even evangelism at all? We certainly have a duty to carry forward the orthodox teachings of our faith, but that can only properly be done with a discerning and progressive approach. Progressive is often used interchangeably with liberal, but what I mean by progressive in terms of theology is to stand in the assumption that God is still speaking into our culture just as he did in Biblical times and still renewing our understanding of scripture and tradition, just as he did for the early church. (For an excellent example of this, see Acts 15:1-35). Being willing to faithfully ask questions of scripture and culture and listen for answers, old and new, is what keeps a church community vibrant and progressive, not any particular ideology.

So why did the ACNA feel the need to break away and blaze their own trail seven years ago? Because they are mired in homophobic and phallocentric cultural beliefs which they have sadly mistaken for proper theology. Their founding document, The Jerusalem Declaration, states that marriage is between "one man and one woman" with the only other option being abstinence. Anyone seeking ordination must conform to one of those two options. Their canons specify male bishops only, and while female priests are apparently allowed, I couldn't find any ordained women listed on their websites in leadership, only a few laywomen in secretarial roles. To deny the value of LGBT persons in ministry and women in leadership is to be willfully blind to the giving of God's gifts and grace.

I worry that young, presumably talented, ministers have been misled by the ACNA into thinking that they are Anglican when they are Anglican in name only. The Anglican church was born out of hard-won compromise between English Catholics and Protestants agreeing to stop killing each other and start worshipping together, not with watered-down practices, but by honoring elements from both groups. The Anglican church would not even exist if those who birthed it had rigidly dug down into their tired cultural beliefs rather than listening for where God was moving. It is this digging down, rather than the great Anglican spirit of compromise, that inspired the recent statement from those gathered in Canterbury silencing the American church.

Here is some orthodox theology for you: the purpose of starting any church or new ministry is to save souls for Christ, not to save our own prejudices and a gasping, wheezing cultural paradigm. It's sad that so many homophobes have coopted the ancient and beautiful Anglican liturgy while conveniently leaving out its progressive and world-changing theology. The ACNA is not the face of the new, emerging church in America. It's not even the face of Anglicanism. The Episcopal church has many flaws, but defining ourselves by who is not allowed in, thank God, is not one of them. For all who undertake to serve the church in ministry and are open to new ways God speaks to the world, may he prosper your work. But for all those who think they can begin new churches and new denominations motivated by the desire to hold onto a dying world view, may God grow and change your hearts