The children book creator David Macaulay is a genius. Really. A recipient of one of the coveted MacArthur Fellowships, the so-called Genius Awards, he was honored for being one of those "talented individuals who have shown extraordinary originality and dedication in their creative pursuits and a marked capacity for self-direction." It was perfect for this energetic artist who is always exploring, experimenting, and playing with new and different ideas.

Certainly the man never stands still. He's got a new book out next month, Built to Last, and was a scholar-in-residence at New York City's Dalton School, where I teach, last year. For The Year of the Sketchbook every single person in the school was given a sketchbook and they were used in a myriad of ways. Urging us all to use sketching as a form of thinking, he worked with high school students, history teachers, kids of all ages doing all sorts of things. My fourth graders, for instance, sketched with David in assemblies and in more intimate settings, but they also used their sketchbooks on their own, say while listening to me read aloud, filling them up with ideas and drawings of all kinds. David also spoke to our community about Built to Last, explaining and showing us how he completely reinvisioned his iconic series of books City, Castle, Cathedral, and Mosque. In this video by his publisher David speaks about the new book:

At the end of his Dalton year, having made his mark on so many of us, David was invited to literally make his mark on the school.

"The idea was to recreate the look of a sketchbook; to have lots of different images all drawn fairly loosely," explained Macaulay.

And so he did --- spending several days this summer creating a remarkable mural that covers every surface of the hallway outside our library. It is a quite extraordinary mural, one that you can truly study for long periods or simply glance at as you head on into the library. Either way, you can't miss it! Here are a few photos to give you a taste, but for a better feel of the whole mural check-out this slide show. 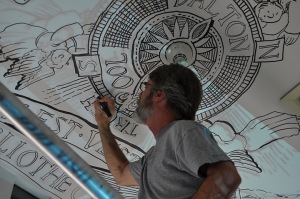 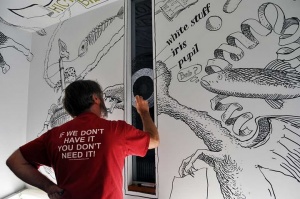 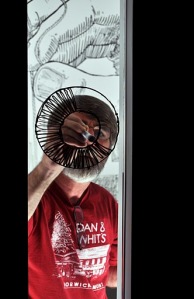