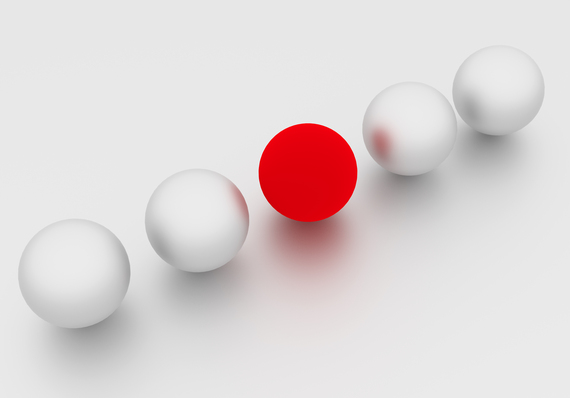 A cabinet official at the Lincoln White House was startled to see the commander in chief engaged in a rather mundane task: "Mr. President," he asked, "are you shining your own shoes?"

Without taking a beat, Lincoln replied: "You wouldn't want me to shine someone else's, would you?"

This story tells us that our 16th president was unpretentious, humble and quick-witted. Those traits add up to executive presence -- an elusive quality that is easy to recognize but hard to define.

A quick search on amazon reveals that there are nearly 140,000 books on leadership. So where do we begin? Start by asking yourself a very, very tough question, the sort that will stun a room into silence: Why would anyone want to be led by you?

Would your colleagues use any of these words to describe you: inspiring, motivating, commanding, credible, confident, or compelling?

Take a lesson from Michelangelo. He wouldn't just pick any old slab of marble for his statues. On the contrary, he'd comb through the quarries in Carrara -- then, as now, a great source of high-quality stone. As a neo-platonist, he believed that he wasn't imposing a concept on the marble, but merely extracting what was already there. The same is true of great managers. They don't draw, they draw out.

On the other hand, strong leaders can also be tough, but only when necessary. As General Electric CEO Jeff Immelt said, "There are 7 to 12 times yearly when you have to say, 'you're doing it my way.' If you do it 18 times, the good people will leave. If you do it 3 times, the company falls apart."

Determining when to act autocratically is the hard part. As Wharton Professor Michael Useem wrote, "Research confirms that executives are overly audacious when they have to make decisions on products and markets with which they are least familiar." He also cites the Marine Corp's 70 percent solution for decision making: "If an officer has 70 percent of the information, has performed 70 percent of the analysis, and feels 70 percent confident, he or she is instructed to decide." If you can get to 70%, then go for it!

One of the cornerstones of executive presence is recognizing that you are on stage all the time. In his book What to Ask the Person in the Mirror, Robert Stephen Kaplan notes that the people in your company will notice if your door is open or closed, where you sit, whether you stay in your office or walk around and so on. Awareness of the image you are projecting is key.

As is visibility. Former IBM CEO Sam Palmisano, for instance, traveled around the globe six to seven times a year in a continuous, high level conversation. He noted that "More than 200,000 of our employees have college degrees. The CEO can't say to them, 'get in line and follow me.' Or 'I've decided what your values are.' They're too smart for that."

There is a deep emotional component to this. If you're not conveying passion, you are not projecting presence. Let's take a journey inside Laurence Olivier's mind, as he explains how he prepared to take the stage as Richard III. Note that he wasn't acting, he was becoming:

I glanced around the stage. This was to be my world for the next 3 hours... Last questions: was I prepared? Of course I was. The spider in the stomach again. God, I should have gone to the lavatory. Deep breath... perfect. Control... control... everything geared to a fine edge, sharp as a razor... Up went the curtain and there we were: the audience and Richard, face to face for the first time. The warmth from a full house is amazing. As the curtain rises, it rushes across the footlights like a great giant's breath. It fills your nostrils. 'Now is the winter...' I was inside the skull, looking out through Shakespeare's eyes.

Never underestimate the value of theater. It worked for George Washington in 1783, as the Revolutionary war was ending. When army officers heard that the government might not have enough money to pay them, they were ready to rebel. After a speech, Washington started to read a letter explaining the US's predicament, then fumbled in his pockets. He pulled out glasses that the men had never seen him wear.

Washington said, "I've already grown gray in the service of my country, and now I am going blind." The officers were so moved that they abandoned the rebellion. Washington may not have really needed those glasses but the dramatic impact was certainly powerful.

Above all, don't hog the credit. In Good to Great, Jim Collins says transformational leaders "look out the window to apportion credit... when things go well" and "look in the mirror to apportion responsibility, never blaming bad luck when things go poorly."

Ever heard of Irving Thalberg? He took over MGM at 26 and served as the model for F. Scott Fitzgerald's book The Last Tycoon. Though Thalberg produced some 400 films, he refused credits. In fact, his name appeared on the screen perhaps only once, after he died at the untimely age of 37. As he said, "Credit you give yourself is not worth having."

Source for Michael Useem quotes: "Decision Making as Leadership Foundation," in Handbook of Leadership Theory and Practice, pp. 512 and 514.