It is painful for the families to lose one, two or three members of the family, but this disaster is too big to imagine. Nearly 10,000 people have swept through Philippines in the Mega Typhoon Haiyan. The question is why? What did the innocent babies and Children have to bear this? What did anyone do to suffer this? 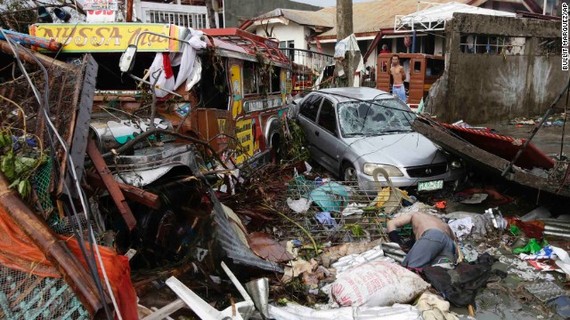 We always turn to God, where is he? Why has he let this happen?

Some of the religious men find it convenient to blame "other's" behavior. They blamed the lifestyles of "others" for inviting the wrath of God during Katrina, Tsunami and other natural mishaps. Indeed the clergy in all faiths blame the human behavior when disasters befall earth. Some of them even make a villain out of God; Pat Robertson claimed Ariel Sharon's illness was a punishment from God to give some of the land back to Palestinians. These men see the world in black and white and miss out millions of colors in between.

Does God really do all this?

It took me years to understand the idea of God, a God that is not a thing or a being, but a formless, indefinable, imaginary but real energy that caused life and sustained it, as we witness it every moment of the day.

Whether we came through the process of evolution, creation or banged out of the big explosion, the fact is we exist, we are here, we see, feel, live, and we are for real.

The two major outcomes of the process were; matter and life.

On this particular issue, I did not take time to study the Bible, Bhagvad Gita, Torah and other holy books but Quran. I am sure you will find similar verses in every scripture as I have found in Quran. After all it is the same singular cause that created life, and the creator always bonds, loves and connects with his creation, Reverend Moon explains that as the divine principle.

Whatever, however or whoever created the matter, it was designed to seek its own balance. For example, the Planet Jupiter has been precisely set to circumambulate around the sun, and it has been doing that for millions of years; it has its own place in the scheme of things, and designed to stay on its course, it respects the other planets' space and their course and co-exists with them. The Solar system, the Universe, the Planets and Stars were all programmed precisely to do exactly what they do. The Quran in Chapter 55:5-6, affirms, "The sun and the moon run their appointed courses, and the stars and the trees follow the program built into them."

The humans on the other hand were not put on a trajectory; they were given the freedom and a device called brain to create their own space and balance. The creator is all about love for his creation, and has reached out to each one of the seven billion of us and delivered a beautiful formula called religion through the spiritual masters to live in peace with oneself and others, and not to tear each other apart. Indeed the Bhagvad Gita and Quran proclaim separately but a similar message -- that God has not deprived any human without a guide to restore trust in the society for people to live without fear of the other.

The chapter continues with the idea that everything is created for your sustenance; in verse 55:10 it addresses, "And the earth has He spread out for all living beings." And elsewhere in the Quran God says, I have made your species to be superior to the others "Ashraful Muqlooqat -- best among the creation" to have sustained the vagaries of the nature. Indeed, you were the first one, among all the species to cope with extremities of weather, cyclones, fires, storms, heat and cold and have survived it all, hence you are Adam, the first of many species to survive.

Quran further adds that we are made vice-regent of this planet, and the survival of our species depends on how we manage our affairs. 55-9, "So establish weight with justice and fall not short in the balance." This is where science can help us understand that elusive balance, and what does it take to keep it, climate control is one of them.

Indeed, anomalies like Tsunami and the Haiyan Typhoon are a part of that balance, and we have to continue to figure out how to cope with them. When Russia was hit by a meteorite last year, there was a discussion on CNN, that in the next 50 years we would have developed the technology to avert a disaster like that. If we can think of avoiding collision of planets in the future, we can predict Tsunamis and save lives. We are merely a speck; indeed the whole planet earth is speck in the scheme of things, thanks to Carl Sagan for immortalizing that phrase, it helps us to learn to be humble.

Unlike the matter, humans were not designed to be in self-balance. Instead, they were equipped with a device called "mind," which works on creating the balance needed for its own survival. There was a time not too long ago, when a heat wave would kill many people right here in the United States, the floods still kill us, the freezing does bring an imbalance in our fruit supply, we have come a long way in managing our own affairs but have a lot more to go, and go we will.

For convenience, call it a spiritual or a God-balance that societies seek to preserve. However, like the traffic violations, we also violate the rules of nature and pay a price for it.

Our safety hinges on figuring out ways to prevent these through vigilance, intelligence, intervention and precautions. Each one of the 7 billion of us is susceptible to the anomalies of the nature; so far we have been able to manage quite a few of furies of the nature. We don't need to blame or depreciate the creator, he has left it to us to take care of ourselves and we have to do our best.

No matter how logical we can get, there is still the Grace part we don't understand. We have to trust the creator and the causer of life to believe that there is a greater logic behind what happens.
It's painful to see the bodies strewn everywhere in the Philippines, as fellow humans we have several options to help them through funding the search and rescue missions, taking care of the ones left out, medical care, food, homes and above all prayers.

God has given us guidance and free will and it's up to us to figure out that balance and maintain it for our own good. God may not be there as we imagine, but it is a name given to the cause that created life, and the God-balance is there protecting and operating on its own schedule.

Mike Ghouse is a pluralist and offers pluralistic solutions at www.TheGhouseDiary.com