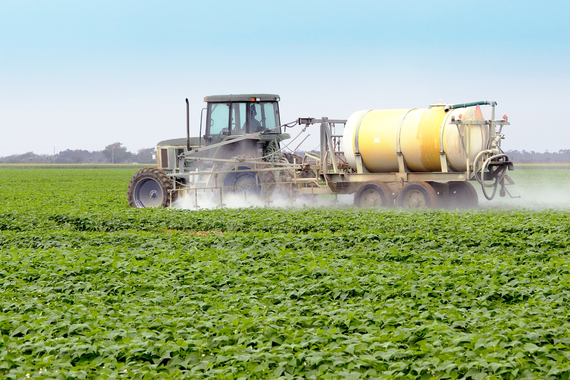 The Environmental Protection Agency's ongoing risk assessment of the world's most widely used herbicide is starting to generate more questions than answers. On Monday, it also generated a giant "oops" from the EPA.

On Monday, after the contents of the documents started to generate questions from media, EPA yanked those documents from its website:

An agency spokeswoman said this:

"Glyphosate documents were inadvertently posted to the Agency's docket. These documents have now been taken down because our assessment is not final. EPA has not completed our cancer review. We will look at the work of other governments as well as work by HHS's Agricultural Health Study as we move to make a decision on glyphosate. Our assessment will be peer reviewed and completed by end of 2016."

The EPA said it was "working through some important science issues on glyphosate, including residues of the chemical in human breast milk;" an "in-depth human incidents and epidemiology evaluation;" and a preliminary analysis of glyphosate toxicity to milkweed, a critical resource for the monarch butterfly.

Inadvertent or not, one of those documents posted and then withdrawn was a doozy, a heavy hammer that seeks to knock down worries about glyphosate ties to cancer. The agency released an Oct. 1, 2015 internal EPA memorandum from its cancer assessment review committee (CARC) that contradicts the March 2015 finding by the World Health Organization's International Agency for Research on Cancer (IARC) classifying glyphosate as a probable human carcinogen. EPA found instead that glyphosate is "Not Likely to be Carcinogenic to Humans."

The memorandum stated that the classification was based on "weight-of-evidence considerations."

Monsanto touted and tweeted the release of the document, which follows the release by EPA of a different memorandum supporting the safety of glyphosate last June. The newest memo gives the company added evidence to defend itself against a mounting stack of lawsuits filed by agricultural workers and others alleging Monsanto's glyphosate-based Roundup herbicide gave them cancer.

"This is the EPA's highest ranking for product safety--they also do nice job of explaining all of IARC's mistakes," Monsanto Chief Technology Officer Robb Fraley said in a twitter posting.

Monsanto has been calling on EPA to defend glyphosate against the cancer claims since the IARC classification came out in March 2015. A March 23, 2015 EPA email string released as part of a Freedom of Information request details Monsanto's efforts to get EPA to "correct" the record on glyphosate "as it relates to carcinogenicity."

Another document newly released by EPA - which was also then withdrawn - illustrates just why EPA's risk assessment about the safety of glyphosate matters so much. In a memorandum dated Oct. 22, 2015, EPA detailed how extensively glyphosate is being used on food items.

That memo updates estimates of glyphosate use on crops in top agricultural states, and provides annual average use estimates for the decade 2004-2013. Seventy crops are on the EPA list, ranging alphabetically from alfalfa and almonds to watermelons and wheat. Glyphosate used on soybean fields, on an annual basis, is pegged at 101.2 million pounds; with corn-related use at 63.5 million pounds. Both those crops are genetically engineered so they can be sprayed directly with glyphosate as farmers treat fields for weeds. Cotton and canola, also genetically engineered to be glyphosate tolerant, also have high use numbers. But notable glyphosate use is also seen with oranges (3.2 million lbs); sorghum (3 million lbs); almonds (2.1 million lbs); grapes, (1.5 million lbs); grapefruit and apples (400,000 lbs each); and a variety of fruits, vegetables and nuts.

Despite - or perhaps because of - the delays in issuing a final regulatory risk assessment on glyphosate, questions about the impact of the chemical on human health and the environment have been mounting. In addition to the lawsuits alleging glyphosate caused cancer in farm workers and others, private groups are scrambling to test a variety of food products for glyphosate residues.

On Friday a lawsuit with a new twist on glyphosate concerns was filed in U.S. District Court in San Francisco. That suit, which seeks class action status, alleges that glyphosate residues found in Quaker Oats invalidates claims by the Quaker Oats Co. that its product is wholly natural. "Glyphosate is a synthetic biocide and probable human carcinogen, with additional health dangers rapidly becoming known," the lawsuit states. "When a product purports to be '100% Natural,' consumers not only are willing to pay more for the product, they expect it to be pesticide-free," the lawsuit states.

Questions about glyphosate have become so prevalent that U.S. Rep. Ted Lieu wrote a letter to EPA officials in December requesting EPA scientists meet with a group of independent scientists to go over "troubling information" related to glyphosate. Lieu cited concerns that EPA is relying on Monsanto-backed data rather than independent, peer-reviewed research in assessing glyphosate. Sources close to the situation say that meeting has been scheduled for June 14, though both EPA and Lieu's office declined to comment.

The EPA's diligence on digging into glyphosate questions and concerns is encouraging to those who want to see a thorough risk assessment done. But the delay and the questionable actions with releasing documents and then withdrawing them from the public eye does not inspire confidence.

Indeed, in another curious move, the EPA on May 2 also issued a newly updated "registration review schedule." But while three dozen other chemical draft risk assessments are listed on the EPA website for release by the end of 2016, glyphosate was not included.