What is it like to be a male cheerleader?: originally appeared on Quora: The best answer to any question. Ask a question, get a great answer. Learn from experts and access insider knowledge. You can follow Quora on Twitter, Facebook, and Google+.

Answer by Paolo Ruiz, 3 years of competitive, 2 years at UT 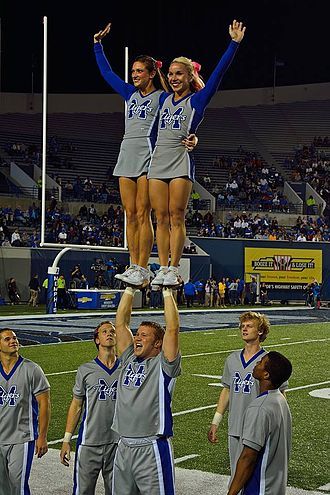 It's sorta weird. When you get in, you have the typical public perception of it being kind of quirky and not that tough, but it's not like that at all. Let me preface the conversation about college cheerleading with a quick aside about cheerleading in high school.

Once you get to college the skill level for tumbling, which was the main individual skill in high school, doesn't really rise, except for the elite cheerleaders who then continue competing and usually attend a more skills-focused college (usually the junior colleges or the less well-renowned schools have stronger teams, because there can be a bit of a culture of not placing school first). Non-elite cheerleaders will go to the D-1 schools and such and compete there.

As a cheerleader at UT, it felt somewhat less competitive but we were more focused as male cheerleaders on allowing our girls to take the spotlight and helping to present them in the best possible way (basically holding them up and letting them do cool things), because we were there to allow the girls to get the crowd hyped. We had a more or less normal male culture, but under most circumstances, we didn't hit on the girls as much because intersquad relationships always make things just kinda awkward (of the 40 or so male cheerleaders I know, I believe 4 are homosexual, and only 2-3 of them were out at that time).

In addition to this, we also needed to work out a lot because the jump from stunting levels for cheerleading in high school to cheerleading in college was vast. To recruit, the girls would go to the gym and ask the strongest looking guys to try out or we would talk to cheerleaders we knew from high school. Some did, most didn't.

Most of all though, during my time, I was just happy to be on the sidelines, because the football and basketball players we cheered for seemed like stars, and I was just a fan that got great sideline tickets.