What is it like to be a bee? What is it like to be a frog? Such questions are likely to occur to us spontaneously while walking through the countryside, and they are a way of exercising our imaginations. In his essay "What is it like to be a bat?," philosopher Thomas Nagel contemplated his own inability to imagine the world of a creature that navigates the sky by sonar, sending out shrieks at frequencies that are mostly too high for the human ear to register, and then locating the presence of trees or insects by means of echoes. The faculties of bats were so strange and yet so precise that they challenged our conceptions of "knowledge."

To imagine the world of an octopus is a greater challenge still. Nagel thought that his mental exercise might illuminate the mind-body problem in philosophy, by laying bare the gap between mental constructions and physical perceptions. For an octopus, its mind is, in the most literal possible way, its body.

Together with other cephalopods, the octopus is the most intelligent of invertebrates. It can figure out how to unscrew the lid off a glass jar, and can use stones or coconut shells to make a shelter. But about three fifths of an octopus' neurons are in its arms. If amputated, an arm will continue to act on its own, and may even try to place food in the mouth of its severed body. To imagine yourself an octopus, you must perhaps divide your very consciousness into at least seven parts, six arms or more and a head. To imagine this, you might think of seven friends or brothers, so close that they seem to be "inseparable."

Yet not everything about the octopus is foreign. It epitomizes that combination of strangeness and familiarity, which can also give animals from cats to bees an intense fascination for us. Its body language seems expressive, in an almost human sort of way. It changes color to match its environment, for camouflage but also to express emotion. We associate lines, especially straight ones, with intellect and colors with feeling. With their fluid movements and changing hues, an octopus can at times appear to be an image of pure emotion.

Scientists have only recently discovered how the octopus is able to respond to its environment, in order to make these changes. The octopus has two large eyes, but it also has light receptors throughout its skin. This means, of course, that the octopus' sight is not localized, but extends around its body in every direction, perhaps even within its body.

The "mirror test" is a highly publicized method to test whether an animal has self-awareness, that is, a "theory of mind." A creature is placed in front of a mirror, and a red spot is placed on its body. It is touches, or pays attention to the spot, that is taken as evidence that of a sense of self. A few animals including apes, magpies and elephants are generally agreed to have passed the test, while disputed claims have been made for the success of dolphins, dogs and monkeys.

But what would happen if somebody tried the mirror test with an octopus? By changing color, it might mirror the mirror, which mirrored it. That, in turn, might make the red spot stand out more as the only constant amid change. What would it indicate if the octopus did touch the spot with one of its tentacles? Would that suggest that the entire octopus had a theory of mind, or only that one tentacle did? My point is that the octopus is a creature so profoundly different from ourselves that habitual categories don't even make sense in reference to it. How can we talk about the octopus' "mind," when it is one enormous mind, as well as being a massive "eye"?

To the extent that the question even makes sense, it is very hard to imagine how one could test whether the octopus has a "theory of mind." Even though the assumption is not always explicit, scientists and philosophers often think of self-awareness as an evolutionary advance, something that confers status in the animal kingdom. But this assumption is far from universal in human culture. Buddhists and Hindus, for example, regard the self as something to be overcome, which is an accomplishment restricted to the great saints and sages.

These figures are at times depicted with many arms, like an octopus, and that might not be entirely due to coincidence. Ganesha, the Hindu god of wisdom, is generally depicted with four arms, an elephant head, and a plump body. With six major appendages altogether and a head that merges with his torso, Ganesha somewhat resembles an octopus, and he is occasionally drawn as one, a metamorphosis that is in the spirit of his playful character.

In many ways, the octopus may be the most mystical of animals. Jesus said, "But when you give to the needy, do not let your left hand know what your right hand is doing" (Matthew 6:3, International Standard Bible). The octopus follows that command, not only with two hands but with many. The perception of the octopus may correspond, then, to the primal unity of all things, described by mystics, most especially with respect to intellect and sight. It is a world in which there is probably little or no division between body and mind, self and other, emotion and reason, worldly involvement and serene detachment.

Just as the bat, as Nagel, has pointed out, challenges our conception of knowledge, the octopus may lead us to rethink our idea of consciousness. This animal shows us a sort of awareness that appears at once intellectual and passionate, yet is not dependent on a sense of self, at least not of the sort that is familiar to us. 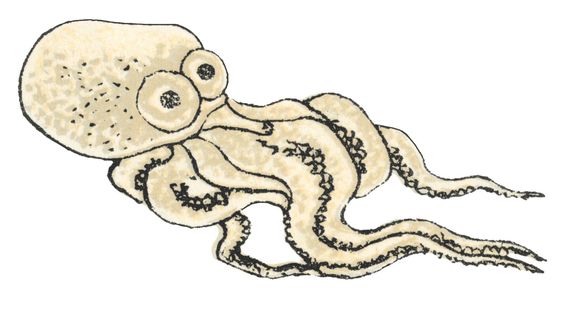