What is it like being the voice of a Disney character?: originally appeared on Quora: The best answer to any question. Ask a question, get a great answer. Learn from experts and access insider knowledge. You can follow Quora on Twitter, Facebook, and Google+.

What little girl doesn't dream of being a princess, especially a DISNEY princess? Ever since I watched The Little Mermaid as a child, I've been singing to lobsters, and calling forks and spoons, "gizmos and gadgets." So being invited to be a part of Disney's Frozen was literally a dream come true. Frankly, I would have paid Disney to let me play a princess, but don't tell them that. But how did I get this opportunity? 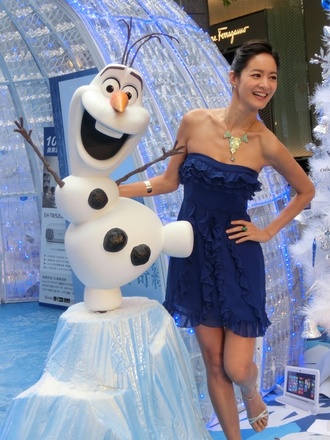 To offer some background, I am not a professional voice actor. My main job is as a travel show host for Discovery Travel and Living Asia and also, as a game show host in Taiwan. I was born and raised in Houston, Texas and so, I say "y'all" at least 5 times a day. In other words, I'm not an obvious choice to be a Mandarin-speaking Disney princess. It has taken me 12 years of living and working in Taiwan for the opportunity be the voice of a Disney character, but it was well worth the wait.

The narration itself was difficult because I was doing it in Chinese, which is not my native language. I really wanted to do the character of Princess Anna justice, so I watched the whole film in English first to get an idea of who she was, what her personality was like, and how Kristen Bell brought her to life.

The big challenge was then to figure out how I could not only be a Mandarin-speaking Princess Anna but also, at the same time, be me. Again, because Chinese is not my native language, I actually had to write out all of the script in Romanization (pinyin). I also had a professional voice coach record all the dialogue for me, and I would just practice the lines over and over again; listening, repeating, making notes, practicing the sounds, and repeating again. I did this for 4 days.

Next, we went into the studio for recording.

The whole process was fascinating. There are certain techniques you discover when working in a recording studio. For example, you want the microphone higher so your voice is projecting up and out instead of down and muffled. Also, it's important to be as relaxed as possible. I actually asked if I could stand up at times when I needed to scream (because Anna has a lot of screaming scenes), the same as if I were doing live acting. In fact, there was one point when I was so much into character that I was all out of breath and exhausted by the end of the recording session!

The most difficult part of the process was trying to relax so that my throat didn't close up. When in the studio, it's easy to tighten up around the mouth, throat and even the diaphragm due to nervousness. It's also possible to stress your vocal cords as a singer might, wearing them out after a few hours. What really saved me was pi pa gao (枇杷膏), an herbal goop that works wonders for a scratchy throat/cough/sore throat, as well as herbal tea with honey. I must have drunk at least 2-3 liters every recording session. I peed a lot. (Yes, even a princess needs to pee!)

After recording, the voice coach and the sound editors reviewed the dialogue to pick out certain words, phrases, or whole lines that didn't match the animation and I would have do the line over again and again until everybody was completely satisfied. I am my biggest critic, so oftentimes, I'd ask to do several more takes until I was happy.

Conclusions: Working with Disney was great fun! It was such an honor to play a strong, independent, silly, and gracious character like Frozen's Princess Anna. She's a role model which will hopefully inspire many young girls, just as I was inspired many (many many, too many) years ago.