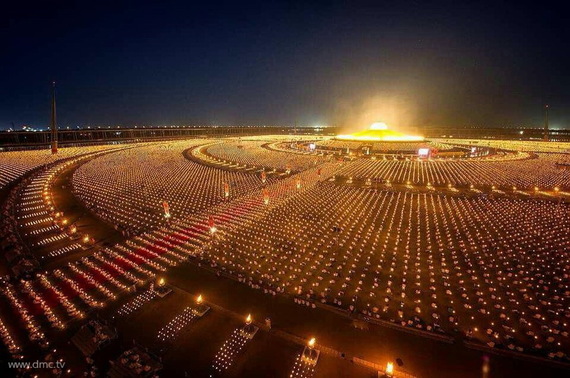 Except for those who actively visit or attend the temple, Wat Phra Dhammakaya is much of a mystery to Westerners looking to explore Buddhism, despite it being the largest, most populous temple in Thailand.

For those who have heard of the temple, they are probably most familiar with the photos of the temple's massive scale and grandiose ceremonies that make headlines in the West.

Curious minds who try to explore the temple deeper will probably have a hard time trying to find out what really goes on there. A quick web search of Dhammakaya and you will probably run into the temple's official website, its Wikipedia page and several outsider news articles about the temple: mostly negative and sensationalist tabloid pieces.

Defendants of the temple say the media distorts the facts to get views and that if you really want to know the truth behind Dhammakaya, you should simply come visit. The doors are always open to those interested in investigating for themselves.

I would agree, having been a member of the temple for much of my life, there is no better way to find out the truth than to explore it for yourself, firsthand. But for those who just prefer to use the Internet, reading this article is an okay substitute.

So what's the real deal? What's so different about this so called "controversial" Buddhist temple? What is it really like at Wat Phra Dhammakaya?

A Temple of Practicality from the Bottom up

A side by side comparison of the chapel at Wat Phra Dhammakaya (left) along side a traditional Thai chapel, Wat Pho (right)
Image source: dhammakaya.net, asiasworld.net

One of the things I've noticed about how things are done at Dhammakaya is that they put practicality at the front of their operation. In contrast to the intricate and decorative design of most traditional Thai temples in Thailand, Wat Phra Dhammakaya sticks to a simpler design.

Taking a walk (or more practically, a drive) through Dhammakaya's massive main temple in Pathum Thani and you can hardly even tell you are in a Thai temple, if anything; somebody who stumbles upon Dhammakaya would confuse the place for a small modern city. With only a few odd buildings out, such as its iconic, modernly designed stupa. 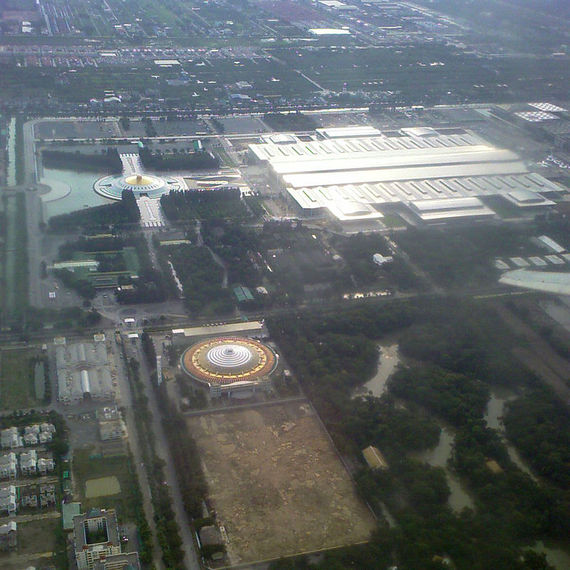 Another uniquely Dhammakaya custom is the use of just one Buddha statue in the chapel, something that is distinct from the Thai custom of having a collection of various Buddha statues enshrined at the front.

Don't get me wrong, there's nothing wrong with elaborate architecture or having a collection of Buddha statues, I have even heard visitors and tourists complain about all the concrete and the plain design of Dhammakaya, asserting their preference for the more majestic beauty of traditional Thai temples.

Of course, Dhammakaya doesn't disagree with incorporating beauty into temples, a Thai tradition parallel to the European tradition of ornate churches. It has to do simply with the custom not aligning with the temple's goals. For Dhammakaya, it's best to allocate those resources elsewhere and to create quick-to-build, easy to maintain buildings for the primary purpose of fitting temple goers.

A side by side comparison of the inside of the chapel at Wat Phra Dhammakaya (left) along side a Traditional Thai chapel at Wat Arunratchatharam (right).
Image source: en.dhammakaya.net, 360 cities.net

An objective that makes a lot of sense when you consider that in just 40 some years Dhammakaya went from a single 80 acre plot of land with a few thousand attendees to the 3 million followers worldwide today that attend the 1,000 acre campus at the main temple and its near 200 affiliates throughout Thailand and in 35 countries internationally.

As for the single Buddha statue issue, the reason Dhammakaya does it is because it provides essentially the same purpose as a collection of Buddha statues, with less of the work of keeping the shrine clean and dust-free.

Dhammakaya Centers Itself on Meditation 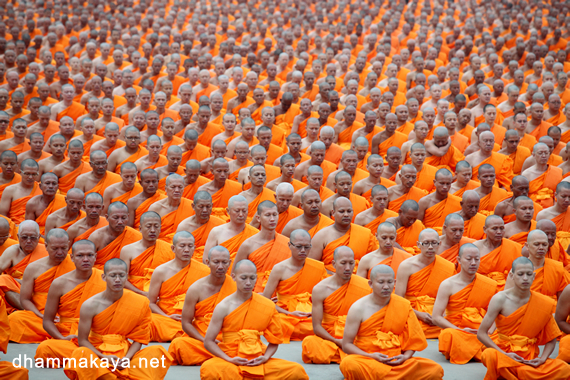 Another reason Dhammakaya puts so much simplicity into the temple, other than practicality, has to do with its focus on meditation. The simple design allows for a more serene atmosphere to bring one's thoughts inward, a detail that's sensible considering the temple's special emphasis on meditation.

Anybody who has explored Dhammakaya is probably familiar with its slogan, "World Peace through Inner Peace", coined by the temple's abbot the most Venerable Dhammajayo. One of the most iconic traits of Dhammakaya is its devotion to the practice and spread of meditation.

The temple does stand out with its emphasis on the "center of the body" referencing the meditation technique it teaches. While the technique is not exclusive to Dhammakaya and is used in a variety of temples throughout Thailand, Dhammakaya is by far the biggest temple that uses the technique.

If you attend any service hosted by Dhammakaya you will find both monks and laity engaged in lengthy meditations en masse. If you tune into Dhammakaya's 24 hour satellite TV program, you will hear reminders multiple times a day to keep the mind centered. 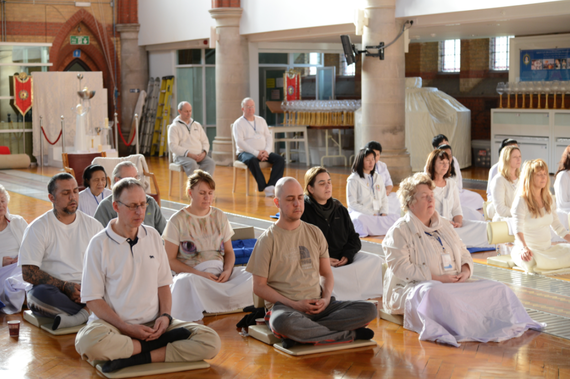 The temple's emphasis on meditation can even be seen in its use of symbols. While Thai temples usually employ statues and pictures of the Buddha in a variety of postures and mudras, Dhammakaya puts the Buddha in a single standard position throughout its vast grounds; a meditation position. Dhammakaya even asks all followers to wear white to the temple to promote a sense of peace and serenity conducive to meditation.

Another way Dhammakaya reminds its members of the importance of meditation is in its use of regular references to the center. Everything from how they count "072" (zero in Thai sounds like center, while 7 and 2 are other references to the meditation technique), to how they fold their mats (toward the middle).

A Temple with Followers Highly Devoted to Buddhist Principles

In an earlier article, I detailed my own experiences as a devout Buddhist growing up in America. And honestly, I think my experiences would have been much different had I not grown up a member of Dhammakaya.

Another identifying characteristic of Dhammakaya is how devoted the members are to the temple and to Buddhism. The stereotypical Dhammakaya member has a no-excuses mentality when it comes to attending services, they never miss an opportunity to make merit, and they bring the teachings home with them.

This description holds true for most Dhammakaya goers, even the younger attendees. And it won't be hard finding a Dhammakaya member who strictly keeps all 5 precepts in his/her daily life.

The devotion Dhammakaya members have to Buddhism can also be seen in its practice of uniquely Thai customs. The Thai tradition of short term ordination as a Buddhist monk for men has been on decline in modern times. But at Dhammakaya, it's not too difficult to find a man who has undertaken temporary monkhood at least once.

I myself have undertaken the Thai tradition of short-term monkhood a few times (13 occasions to be exact), if you include ordinations as a novice (below 20 years old) monk. That number may seem staggering, but I have met many fellow Dhammakaya members who have undertaken the short-term ordination tradition several times as well. This track record of devotion isn't uncommon at all among those who identify with Dhammakaya. 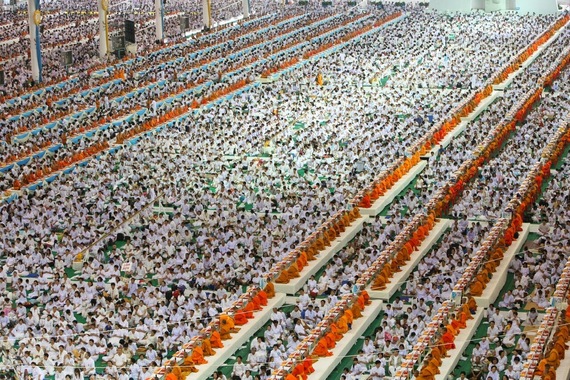 So how was Dhammakaya able to achieve such a devoted base of supporters? In short, it has a lot to do with its distinct approach to Buddhism.

Dhammakaya is famous in Thailand for its strict monastic discipline aimed to uphold the faith of the laity. Even as a short term monk, I have encountered monks from other temples that have approached my group of fellow temporary monks and can instantly identify us as Dhammakaya because of our orderliness and the disciplined way we carried ourselves.

Another reason Dhammakaya commands such a devoted following comes down to how Dhammakaya approaches teaching Buddhism. The temple tends to keep Buddhism practical: focusing on self-development and cultivating moral character. One of the most common sermons I hear when attending Dhammakaya is the importance of creating good habits.

Practicality in teaching is present even when it comes to the metaphysical aspects of Buddhism that westerners tend to overlook. Your average Dhammakaya member tends to have a much stronger background in aspects of Buddhism involving the Law of Karma. 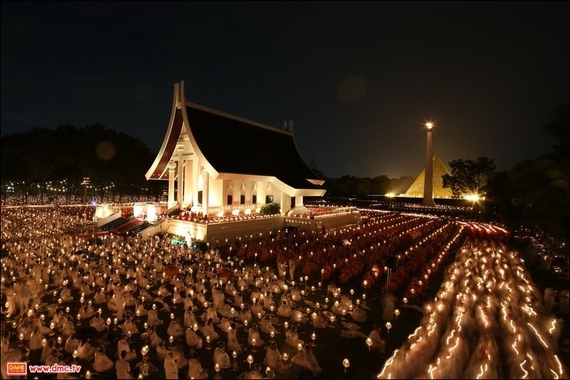 Despite all these differences, it is inaccurate to call Dhammakaya its own sect. Talking to those on the inside, you would know Dhammakaya's goal isn't to break away from traditional Thai Buddhism, but to promote it. It's unique aspects are nothing doctrinal, and are just a part of the leader, Venerable Dhammajayo's, strategy to align the temple's operation with his vision of promoting Buddhism and advocating meditation.

Dhammakaya's unique style however, has made itself stand out from traditional Thai Buddhism. And their distinct way of operation has had its own share of criticisms. Traditionalist critics and sensationalist tabloids looking to attract readers with scandalous stories about the Buddhist juggernaut are not uncommon. It's an interesting situation I'd love to address, but for length reasons, let's leave that for another time. 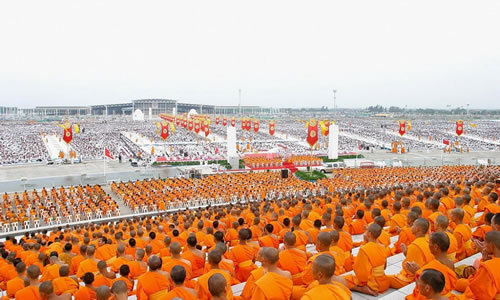 Controversial or not, Dhammakaya's unconventional methods have certainly proven themselves effective in drawing in massive crowds and inspiring Buddhists by the millions. And the temple's rapid rise in membership is definitely an indicator of the success of their distinct approach.

With results comparable to that of other successful contemporary Buddhist organizations such as Thich Nhat Hahn's Plum Village and Taiwan's Big Four Buddhist Organizations, I think few would say Ven. Dhammajayo's strategy hasn't been working.