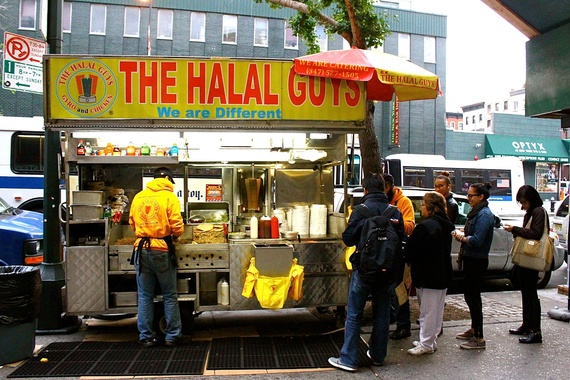 It's a common sight in New York City: the long lines, persistently crowded even on the chilliest of nights, stretched around the block in front of the iconic red and yellow awnings. It's consistently crowded, but The Halal Guys, around for more than twenty years now, never fails to please its loyal customers. Now, as the chain is poised to grow globally, it is being recognized for its consistently innovative contributions to the halal market.

Founded in 1992 by Mohamed Abouelenein and Abdelbaset Elsayed, the chicken and rice platter came about following Abouelenein's astute observation that "hot dog is not a meal." He had been a hot dog seller before becoming, as he claims, the first peddler in New York to sell halal meat from a cart. Open from 7 pm to 4 am, his halal cart was originally geared towards the cabdrivers, most of whom were Egyptian and Pakistani. "They suffered too much from no halal," Abouelenein said. The dish being sold was ubiquitous: chunks of chicken or gyro meat, yellow rice, scraps of lettuce, hot sauce, and the mysterious white sauce. It's a white sauce that is far removed from any traditional food, a mixture that is uniquely New York in nature.

The food cart is the most checked in of all time on Yelp.com, a favorite both with tourists and native New Yorkers. It's seen colloquially as the sign of successful integration by many Muslim Americans who make a trip to New York City simply to get a taste of the dish that has struck a chord with so many around the world. Not only is it uniquely halal, the dish is an amalgamation of many traditional dishes, standing its own ground as something that is uniquely Muslim and American.

Now, with the expansion of The Halal Guys, things are about to get global. In June, The Halal Guys opened up a brick and mortar location in New York, and teamed up with Fransmart, the same franchise company that brought Five Guys Burgers nationwide to expand their business. While the initial focus will be on creating US locations, there are also plans for expansion in Europe and Asia. Dan Rowe, founder of Fransmart, said to the Daily News, "You just look at the lines, and it's people from all walks of life. That right there is a franchise. It's absolutely the right time now, (because) halal food is going to become the new standard. There are already a zillion burger brands."

It was with that in mind that the American Muslim Consumer Consortium (AMCC) decided to award The Halal Guys the 2014 Multicultural Award. Every year, AMCC seeks to present a multicultural award to a company that works to promote diversity and multiculturalism, and is inclusive to all minorities in America. With the award, The Halal Guys will join the ranks alongside Best Buy, Ogilvy & Mather, and Saffron Road Foods. The international reach of The Halal Guys fits in perfectly with this year's conference theme, "Muslim Market: Global Perspectives, Entrepreneurs Driving Change," which looks to examine how entrepreneurs drive the development of the halal and ethical lifestyle markets, global market outlook and the rising influence of ethical capital.

Uniquely situated, AMCC has been working since 20009 to address the needs of American Muslim consumers and raise awareness of the $170 billion market. It also works to promote companies and entrepreneurs who develop products for this niche market, opening the doors yearly for a national conference, happening this year on November 15.

Ultimately, AMCC hopes that franchises like The Halal Guys will become one of many, considering the unique potential present within the diverse halal market. By its own merit, The Halal Guys has pushed itself out of the food cart fray into international acclaim, a recognition that many seek and few ever succeed in earning. In the next few years, as the former single food cart expands around the world, it remains to be seen just how widespread its effect will be on the halal market. Until then, satisfying oneself with a filling plate of chicken, rice and white sauce at The Halal Guys' original location on 53rd and 6th will have to be enough.