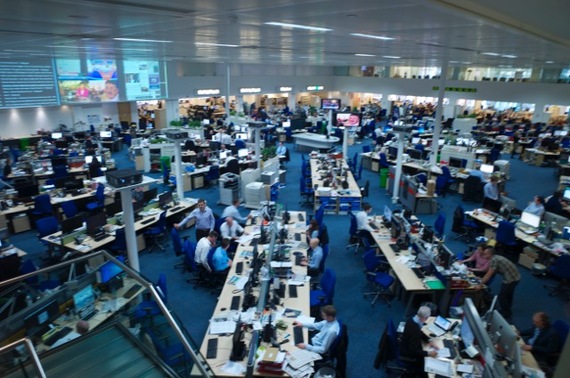 Newsroom of The Daily Telegraph

Some years ago, I had the pleasure and privilege of meeting Jim Rogers, the self-made billionaire (or maybe it was just hundreds of millions), and partner of George Soros.

Of course, I asked him the obvious question, "How did you do it?"

He told me he made his money by listening to the news and understanding the consequences of the news.

"When the Soviet nuclear reactor at Chernobyl blew up, the world was fixated on the radiation that was being released. But I was fixated on potatoes."

"Yes. That's where the money was. I knew that the fallout would render a good part of the Russian potato crop worthless, so I put in a big bet on potato futures. And I won."

There was indeed value to news. Good news.Good information. If you knew what to do with it.

Today, the news business is on the ropes.

Yesterday's announcement that major news organizations would now be carried on Facebook was just one more indication of the dire straits that the news business finds itself in (not to end in a preposition).

But maybe the problem is not "news" per se, but rather the way we are selling it, or trying to.

From the New York Times to the CBS Evening News, we have been trying for years to turn news into a kind of entertainment. A kind of never-ending reality show. A reality show in search of ratings. In this construct, is it any wonder that TV news is dominated by Kanye and Kardashians? That's where the ratings are. But it may not be where the real value is.

In 1815, Napoleon escaped from Elba and headed back to France where he raised an army and seemed on the point of resurrecting the French Empire in Europe. (Stick with this. Trust me.)

This was bad news, particularly in the financial markets in London. The British had expended vast amounts of money in defeating Napoleon, and now he was back. The London Stock Market was reeling.

The British dispatched Wellington to defeat Napoleon once and for all, and on June 18, 1815, they met at Waterloo in Belgium.

Napoleon, of course, was defeated.

But the more interesting story takes place not at Waterloo, but rather in London at the stock exchange.

As I said, the stock prices were gyrating on rumors. In those days, it would take three days for the "news" from the battlefield to reach London by boat.

Prior to the battle, Lord Rothschild had been approached by a young entrepreneur with an invention. A pigeon in a cage. The concept, the inventor explained, was that the pigeon would be carried to the battlefield. As soon as the battle was over, the pigeon would be released, with a band around his leg carrying the news, and he would fly back here -- three days ahead of the fastest boat.

Rothschild liked the idea. He invested in the pigeon. P-mail.

And, as sure as his word, the pigeon arrived with the news.

Rothschild opened the band and headed for the London Stock Exchange floor.

There, he read the report out loud. "Napoleon is victorious", he said.

The prices on the London Stock Market collapsed.

Rothschild bought up as many shares as he could.

Three days later, the boat arrived with the news of Napoleon's defeat.

Rothschild made a fortune.

All on the basis of p-mail.

And the young inventor's name?

Or so the apocryphal legend goes.

The power of news.

The value of news.

Is this not how Michael Bloomberg made his billions? On selling the "news" to those to whom it had real value?

So maybe the answer here for news companies is to stop trying to combine journalism with entertainment.

People will pay a lot for the news -- at least people who know what to do with it.

For them it has real value.

And for the rest of us?

I have no doubt that my FB feed will soon be awash in stories about Kanye and Kim Kardashian.

Or maybe the profits from selling "real value news" to the few will support news for the rest of us.