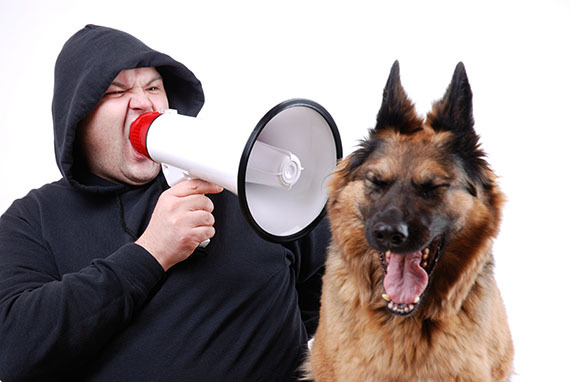 This past weekend my husband and I saw the film Whiplash. The story centers around a teenage music student whose teacher is... well, I can't really print the words that would most accurately describe him. At one point the student, a drummer, is asked to play a few bars of a piece the group has been working on. "That's not my tempo!" the teacher shouts. The boy tries again. "Not my tempo!" the man barks again. And so it goes. After a number of tries there is blood on the boy's hands, and yet, after each attempt, the red-faced, despotic instructor just keeps yelling the same thing.

What does this have to do with dogs? Well, consider the way the teacher reprimands the boy. Does "Not my tempo!" give the drummer any concrete information? It certainly tells him he's got it wrong; but beyond that, there is nothing useful to work from. Even yelling, "Faster!" or "Too damned slow!" would have offered a clue. And yet, many dog owners seem to be constantly yelling "No!" at their dogs. Sure, a dog will stop what he's doing when that one-syllable, sharp sound is uttered, but does it tell the dog what he's expected to do, exactly? Nope.

Take the example of a dog who's chewing on something he shouldn't. The owner yells, "No!" The dog stops momentarily, having been startled by the sound. The dog might then go right back to chewing on the forbidden object. But what if, instead, the dog was instructed to "leave it!" Assuming the dog had been trained to understand and respond to the words, it would let the dog know that the owner is requesting that he kindly move away from the object. "Leave it!" is an instructional reprimand, whereas, "no!" is more like "not my tempo!" which leaves a dog wondering what exactly he did wrong, thereby increasing the likelihood that he'll get it wrong again. Once the dog had complied with "leave It!" the owner could redirect him to a more appropriate behavior.

A helpful exercise I've used with training clients is to draw a vertical line down the middle of a piece of paper. On the left side, list all the behaviors you'd like your dog to stop doing. Number one might be jumping on visitors at the door, number two, pulling on leash, and number three, begging for food at the table. Now, on the right side, jot down what you'd like the dog to do instead. For number one, the doorbell could become the dog's cue to go and lie down on his bed. Number two could simply be "walking by my side," while three's food begging could be solved with a down-stay on a nearby dog bed during family mealtimes.

Considering what we'd like dogs to actually do instead of simply shouting a frustrated, "No!" takes a bit of forethought, but it communicates information the dog can use. In the long run, issuing calm cues that tell the dog what we'd like him to do solves problems much more efficiently with less stress all around. Now, that's my tempo.