I am 33 years old. I am a mother of three very different, wonderful children. I am a white, Welsh, married woman. I want to know, what is normal? What do we even mean by labelling things "normal," are we tagging them as socially acceptable? If you're not "normal," does that make you abnormal? A word that we so frequently associate with weird and therefore a lack of social acceptability?

Aren't we all different? Doesn't the same media that revels in pointing out anything and anyone that dares to stray from the norm also increasingly revel in telling us to celebrate our differences? So, surely, we should accept that, in a world inhabited by over 7 billion people, different is the new normal. The real normal.

They say "normal" I say "hornswaggle."

I remember seeing Cerrie for the first time on Cbeebies, I thought that was fantastic. The fact that I even had this thought shows how far society needs to go, to get from where we are to where there is no 'normal', where everything is normal. Seeing people from all walks of life in everyday situations helps break down this idea of what it is to be 'normal'.

When I heard about the persecution Cerrie had received for being a Cbeebies Presenter I was shocked and disgusted. People felt that because her arm was different, not "normal," it was upsetting for their children! People seemed truly petrified that their children should ask questions!

My son recently asked me the question that these parents so feared, although it took him about 2 years to even notice. His exact words were "Why doesn't she have a hand on that arm?" Do you know what? I was pleased he asked. We talked briefly about how she did have a hand, it was just different to his, not better, not worse just different. Lots of people out there have things that may seem odd at first, but they're just different. No more odd nor weird than the fact that he has brown hair and his brother has blond, just simply different.

I want to teach my children to go out into the world and spread their happiness and kindness, surround themselves with people that make them happy. To choose those people based not on what they look like, their gender, race, whether they are 'normal', but on who they are and the love they feel for each other.
This 'normal' business is hornswaggle. There is no normal, there are just people, beautiful and unique people.

Why is it so important to change?

The key to really becoming equal in gender, in race, inclusion and representation will be to teach our children to see these things clearly, to remove this perception of "normal." To rid them of archaic judgements of their peers. It's time to stop with these outdated perceptions of normal and acceptable and empower all children.

Imagine a world where we don't judge, where we are not judged on what we are capable of on appearance? That is a world where we are equals. A world where individuality and creativity can thrive. Where we treat everyone as equals, with complete inclusion. We need to sow the seeds for that tomorrow.
In that world, not only will our children see things more clearly than the generations that have come before them, but they will also not notice the differences and spend time and energy on fearing or ridiculing them because they will have simply accepted them and moved on to far more important things. The amount of energy and focus that this will free up amongst future generations cannot be understated. Human endeavour is limitless and the additional freedoms that our children and our children's children will be able to enjoy, when combined with the additional time and energy they will all have, will allow for change and development that we cannot begin to imagine. 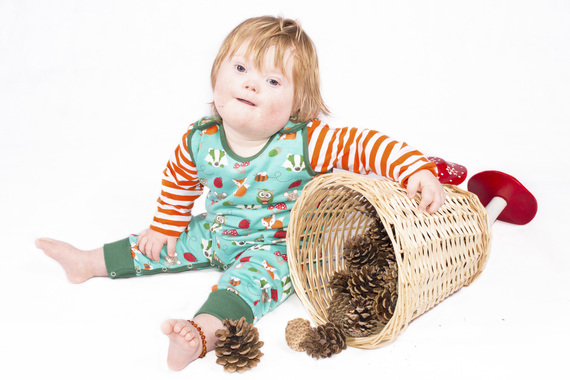 What is being done?

Every time we release a call out for models, or more recently
our present search
for Brand Representatives, I have to spend so much time stipulating and making it very clear that we are actively encouraging ALL children to join in, that we want to represent ALL children. It saddens me every time.

Things are changing slowly with the inclusion of talented models like Madeline Stuart who at 19 years old has now walked New Yorks Fashion Weeks runway twice in her budding career, inspiring other youngsters not to let people put you in a box.

"Changing the Face of Beauty empowers people living with disabilities by advocating for inclusive imagery, thus changing perceptions and igniting futures in the media and advertising industries."
Also the Toy Like Me campaign: "Celebrating disability in toys & calling on the toy industry & children's TV to better culturally represent 150 million disabled kids worldwide."

Everyone deserves to be seen, to be included, to be represented. Is this paraded 'normal' a representation of beauty? Beauty isn't one thing, it isn't singular - it is all around us in everyone's smile.
Show brands it's time to change by celebrating and supporting the ones that break this mould, the organisations fighting to change this. Big businesses are watching, now let's just make them listen.

Together we are louder.

More:
Inclusionspecial needsdisabilityinequalitysocial change
Newsletter Sign Up
Raise the kind of person you'd like to know
Subscribe to our parenting newsletter.
Successfully Subscribed!
Realness delivered to your inbox

Mother of 3, wife to 1, bestie to my Malamute beastie. Child of the 80's. Mostly caught toiling away at my passion: Gecko Clothing.