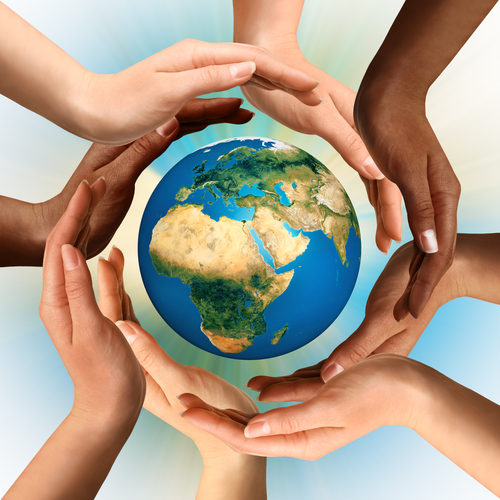 I am attending the Sustainable Ag and Food Systems Funders (SASFS) conference in Denver this week and a provocative subject was raised about the dominant story we harken to regarding our agricultural system. The message is everywhere: in subway stations, at the baseball game and of course on television. "How do we feed the world? We feed the world only through more technology, greater concentration and the exploitation of resources." But in truth, are these strategies really serving us? How do WE feed the world when our agricultural system has created food deserts, obesity and the decline of the family farm, degradation of our soils and waters, and exploitation of our animals? Should not the narrative first be how do we feed OURSELVES?

I went into the session thinking it was about finding the narrative for my own UNFI Foundation supporting organic and sustainable food systems. I soon realized this was a dialogue about finding the voice of the community I was in, a voice that resonated deep from many different sources. There were foundations with different missions concerning access to land and protecting the family farm. There were protectors of animal welfare, activists for social justice as well as fight against urban hunger. They spoke of how the industrial food system had impoverished the rural communities while providing fast junk food to the urban disenfranchised. I learned that there used to be 23,000 hog producers in Missouri reduced now to less than 2100, a 91 percent loss of family farmers since 1985! I was awed at the work to teach young school children to grow food and how to transform that fresh produce into a meal for the first time. I discovered the struggle of farm workers' rights and earning a living wage. I wondered at the tenacity that was needed to change policy on a local and national level.

The issues were many and varied, but the base cause seemed to originate from the fact that our food system had become mechanized, industrialized, dehumanized and reorganized to support the corporate welfare of a few.

The impact of industrial farming is relatively new, having developed in the last 70 years, a mere blip in the extended history of agriculture. Prior to this concentration of "modern" agriculture into the hands of a few corporations, farmers saved their seeds and fed their families throughout the generations with those seeds and time honored traditions. Millennium of Agrarians had learned to build the soil and produce better yields through strategies that integrated biodiversity of animal husbandry and crop rotation.

I chance to say this new type of industrial agriculture isn't modern at all but a development of the notion that we can conquer nature rather than be in harmony with her. Modern agriculture has not yet been conceived in its fullest sense. We are still developing a future dependent on what we can envision.

We came together to deliberate the popular narrative being put forward by this corporate system and realized that sometimes we used its very language. We must feed the world through organic and sustainable agriculture. Well, by golly, perhaps feeding ourselves while creating a harmonious environment is really our message. We need to speak about the vision and what we can create rather than what we are against. We must engage the youth and young parents to help us recreate that vision and help us frame the dialogue.

That vision includes fertile living soil and streams free of chemicals. It's a place where family farmers can make a sound living, plant a diversity of crops and create habitats for our pollinators. Researchers are working on real solutions for organic techniques and new plant breeds owned by everyone. Access to farmland is easy for young beginning farmers and transition to organic is rewarded. What we want is a world where the people own the seeds and new technologies are tested for safety before they are used in food production. This vision allows animals to live their lives with enough space and fresh air to live as they were intended.

It is time we all sat down and developed a new narrative on how to change the food system we have erroneously built and believed in. It is destroying our health, our rivers and soils, our biodiversity and our human integrity. What is this narrative that will take us into a new food future? Will you join in and help create it? We need your voice.